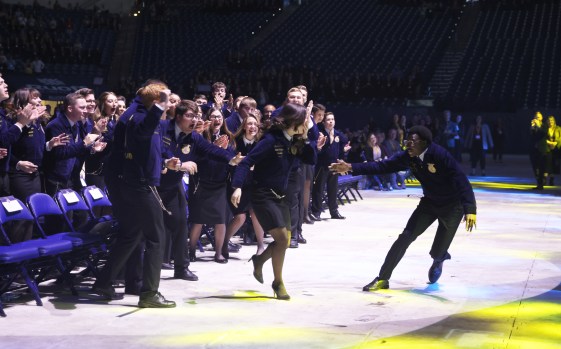 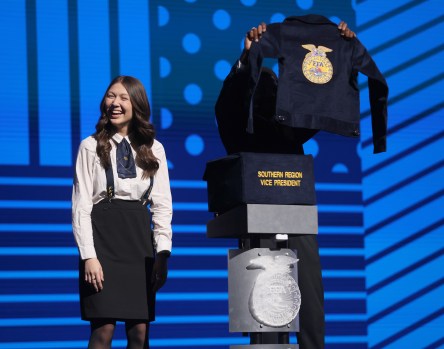 West Rowan's MacKenna Clifton will take a year off of studies at N.C. State University to travel the country as a Future Farmers of America vice president. Submitted photos 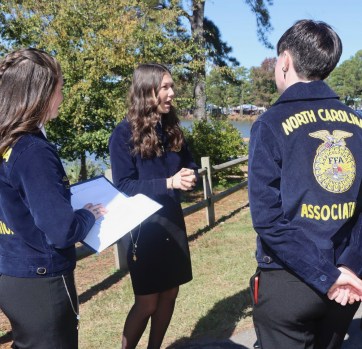 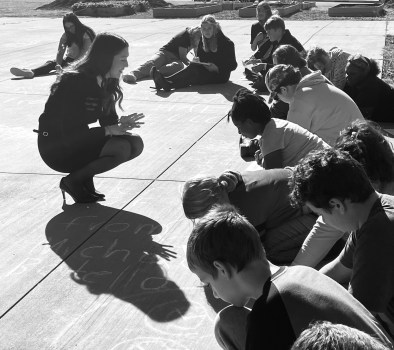 For one West Rowan High School graduate, joining the Future Farmers of America seemed like an excellent opportunity to expand her horizons. Now, she will be doing just that after being selected to serve as one of the organization’s vice presidents.

MacKenna Clifton, of Salisbury, will represent FFA for 2023. She is currently a junior at North Carolina State University.

“(FFA) has about 850,000 members in all 50 states and the U.S. Virgin Islands and Puerto Rico,” Clifton said. “Each year, they select six individuals to serve for a year to travel around (the country) advocating for agriculture by giving speeches, talking about student development and leadership. From there, we also do workshops and spend beneficial time with students.”

Clifton does not come from an agricultural background, but she discovered that she was interested in the field in high school.

“I was supposed to go to North Rowan High, but at the end of my middle school career, I decided to transfer to West Rowan to go into their agricultural program,” Clifton said.

At first, she second-guessed herself.

“I remember walking into my classroom and being like, oh my goodness, what have I done?” Clifton said. “I almost transferred away from that school, but I had one teacher, Mr. Jason Chester, that invested in me on day one.”

Chester’s instructions opened Clifton’s eyes to the possibilities that lay in store in the agricultural world.

“He got me involved in (FFA),” Clifton said. “He told me about why agriculture was important, and even more so than that, he told me about leadership opportunities within the organization that could grow me and could attribute to any career that I choose.”

Those opportunities proved the hook that kept Clifton’s engagement.

“Whenever I think about that, the reason that I ran for national office was to make sure that I could help provide students with those same opportunities and to help them know that they could also have an impact on this industry,” Clifton said.

She’s come a long way, as she will happily admit.

“I was one of the students who thought chocolate milk comes from brown cows,” Clifton said. “My beginnings really started in that classroom, and I have been fortunate to have experiences that increased my knowledge in that area.”

For Clifton’s sake, the experience would prove vital when she went through the vice presidency interview process.

“(The interviews) were pretty extensive,” Clifton said. “There was an application process where we turned in a resume and answered questions. Then, there were seven different rounds that each candidate had to go through.”

It began with a video submission in which each candidate presented their case for consideration.

“We talked about why we wanted to run for office,” Clifton said. “Once we got to Indiana, where the official interview process took place, you started with a personal round. It’s exactly what it sounds like. They get to know you.”

The next round is one-on-one, where each candidate undertakes nine 10-minute interviews.

“They basically just rip you apart,” Clifton said. “They can ask you anything under the sun. It’s like you’re going out for the FBI.”

During the next round, each candidate gave a five-minute speech, followed by five minutes for questions.

Clifton indicated that there is an element of the process which involves talking with and getting to know industry professionals.

Having been through the gauntlet, Clifton is ready to get to work. However, in her new role, Clifton will be required to take a year off.

“N.C. State has been really helpful in this,” Clifton said. “(Since) we are an agriculture-based college, they helped me wrap up my semester early. This is (basically) just a gap year. Whenever I come back in January 2024, I will just pick up wherever I stopped.”

Clifton is studying agricultural education and working toward two minors in agri-business and Spanish.