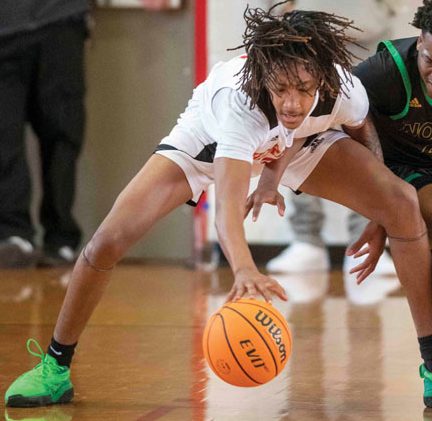 Jayden ‘Juke’ Harris is rated as a four-star recruit (out of five) and he’s considered a top 40 player nationally, so he’ll make things interesting for the Hornets this year. File photo by JON C LAKEY / FOR THE SALISBURY POST. 1/15/22, Salisbury,NC.

SALISBURY— The Salisbury boys basketball team could be really special, but so is the schedule.

The Hornets have the best team in the county, on paper, but they will face challenges just about every step of the way.

Thomasville and North Rowan figure to be tough opponents in the Central Carolina Conference and the Hornets haven’t scheduled non-conference cupcakes. It’s almost all 4As and private school powerhouses.

“It’s definitely a 4A schedule we’ve taken on, the toughest schedule I’ve ever faced as a head coach, but we’re embracing it,” Salisbury coach Bryan Withers said. “There may be nights when we play those big schools and they are playing great and we get humbled. But being humbled isn’t such a bad thing. Better to be humbled than to be thinking you’re better than you actually are. If you’re playing weak teams, sometimes you get the idea that you’re really good, even if you’re not.”

There will be a stretch in late December when the Hornets play four games on the road in Charlotte and Greensboro against 4A opponents. That will be a seismic change from tangling with Rowan opponents in the Sam Moir Christmas Classic.

In the big picture, the scheduling shift should help the Hornets. It’s going to help their strength of schedule, RPI and playoff seeding — as long as they can win their share.

Salisbury has moved into a different realm and into the world of lofty preseason statewide rankings and expectations mostly because of a 6-foot-6, 175-pound guard named Jayden “Juke” Harris.

Harris, who holds more than 25 Division I offers and has taken visits to Houston and Tennessee, was tough to stop as a sophomore when he was a mismatch every night and scored a county-leading 23.1 points per game.

He still had things to work on as a sophomore, but he blew up — in a very good way — over the summer months. On the AAU circuit, he attracted not just regional attention, but national attention. He has a skill set that combines ball-handling ability and a smooth outside stroke with a knack for getting to the rim and finishing. He’s 6-6 now and he’s a legit guard, and those guys aren’t easy to find. Long and lean, he has the ideal basketball frame and the potential to be an exceptional defender as he gets thicker and stronger.

Harris is rated as a four-star recruit (out of five) and he’s considered a top 40 player nationally.

“There was a stretch before the season where he had two or three ACC coaches in the gym every day watching Juke work out,” Withers said. “It was fun for Juke and also good for his teammates. They’ve all gotten some extra exposure. Maybe an ACC coach calls one of his coaching buddies and tells him he saw one of Juke’s teammates who can play college ball at the D-II level. I’ve gotten a lot of calls from coaches wanting to know what our schedule is, because of Juke. I’m happy for Juke because he loves the game, he’s worked hard at it, and now he’s in a great position with great offers.”

Withers compared the recruiting hoopla surrounding Harris to what the Salisbury football program recently experienced with Jalon Walker, the linebacker who signed with Georgia.

Withers expects Juke, the junior, to be even better than the Juke, the sophomore. If Salisbury is going to thrive with the schedule it’s taken on, Juke will need to be.

“He’s gotten better as a passer and rebounder, he’s working hard defensively and he can bring the ball up with no problem when we need him to,” Withers said.

The key loss for the Hornets was Cam Stout, a terrific shooter who averaged 20 efficient points per game. The Hornets haven’t added anyone to the mix who is going to score 10 like Stout did, but they have a deep roster of guys who can get them 5 to 10 points per night.

Dashawn Brown, a 6-foot-3 forward, figures to be the No. 2 scorer. Brown is mostly about layups and free throws, but his aggressiveness and hustle get it done. He had 21 points and 10 rebounds in one of Salisbury’s early contests.

The Hornets have quite a collection of experienced guards.

Mike Geter, the football quarterback, is still only a junior but has two varsity hoops seasons under his belt. The lefty averaged 8.0 points in 2021-22. He’s more of a driver than a shooter, but he is very strong and tough around the rim.

“He gives us a lot of leadership and a lot of defense,” Withers said. “He’s a winner. He’s that guy who will get the big bucket and he’ll step in and take a charge.”

Deuce Walker was a little banged up at the end of the football season, so Withers allowed him to rest his shoulder during Salisbury’s opening two games, but Walker has practiced this week and is ready to go. He isn’t likely to score big, but his speed and quickness and strength make him another serious defensive player.

Withers had a tough decision last season with regard to guard Bryce Dalton, but elected to keep him on the varsity as a freshman. It worked out. Dalton got quite a few minutes, helped out with 63 points and should be ready for a breakout sophomore season. He can handle and score.

“Looking for a big jump from him because of all the time he’s put in,” Withers said. “Whenever I’d see Juke in the gym, Dalton was always in there with him.”

Hank Webb, who got decent varsity minutes as a freshman, has grown to 6-foot-4 and gives the Hornets a tall perimeter player. He could be a starter. He attacks the basket hard, can shoot the 3-pointer and is a long defender.

JyMikaah Wells, the star running back, is making a basketball comeback. He’s extra strong, and he could make an impact on the defensive end.

Tre Davis could be an important addition. He’s got a nice-looking lefty stroke and made key shots in the early games.

Kenyon Hairston, moving up from the jayvees, is described by Withers as a “defensive-minded athlete.”

Veteran Damian Brandon and newcomer Roy Goodlett III will help. Withers rates both of them as smart players.

Chauncey Sheppard and Jaiden Colbert, who played at Salisbury Academy a few years ago, are 6-foot-3 seniors who are new to the program. They’ll give the Hornets more size and depth.

“And we’ve got a pretty stacked jayvee team for the second straight year,” Wither said. “The program is in good shape.”

The Hornets have had eight straight winning seasons. They’ll surely make it nine in a row.

The start was exciting, with Headliner Classic victories over a loaded Piedmont Classical team (Harris made the winning free throws) and 4A Glenn during the opening weekend.

“We’ve played in that tournament several years so we know how good a tournament it is,” Withers said. “It’s the first time we’ve gone 2-0 in it. Piedmont Classical is very tall and talented and  they dunked on us seven or eight times, but our guys kept playing.”

Salisbury experienced another solid football run and most of the Hornets played football, so they got started in the gym a little later than everyone else.

But it should come together for them pretty quickly.

“We always root for the football team to go all the way, but once we get those kids, then they’re all-in for basketball,” Withers said. “We’ve got great kids. Now we’ve just got to go play.”

Playoffs: Lost to North Surry in 3rd round

League: 1A/2A CCC (Salisbury, West Davidson, East Davidson and Lexington are the 2As, while North Rowan, Thomasville and South Davidson are the 1As)