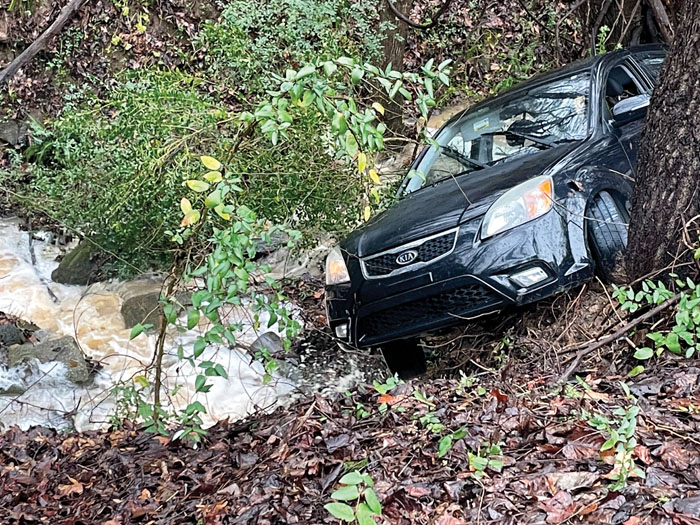 A car hydroplaned and slid off Unity Church Road on Wednesday morning after the vehicle hit a patch of heavy water washing over the roadway. The Atwell Fire Department performed a rescue operation where they rappelled down the steep embankment to get the driver out of the car. Photo by Elisabeth Strillacci, Salisbury Post

KANNAPOLIS — A young woman driving her vehicle on Unity Church Road Wednesday morning hit a patch of heavy water washing over the roadway and her vehicle hydroplaned, sliding off the road and down a steep embankment, according to fire officials. The small car ended up hanging over a small stream that had become much fuller in the morning’s heavy rain.

The driver, who was not identified, called 911 and reported her car was unstable and she was unable to get out. Her car was nearly on its side on the bank, and a small tree and one bit of concrete berm were all that were holding her car from the water.

Frank Greene of the Atwell Fire Department, which took command of the scene, said firefighters were prepared for the event, both in training and in equipment.

“They train in mountain rescue both here and up in the North Carolina mountains, rappelling and working with ropes,” he said. “And they have the necessary equipment.”

Greene said in order to stabilize the car, firefighters went down the embankment by rope, secured in their own harnesses, as well as by ladder. They secured the front and back of the vehicle as much as possible before harnessing the driver to get her safely out.

“She walked away, no injuries,” he said. But he pointed out that firefighters had arranged themselves along the opposite bank with ropes, just in case the car fell and they needed to catch it in the water.

“And as always we appreciate the mutual aid,” he added. Atwell was joined by Rowan County, Kannapolis and other fire departments along with N.C. Highway Patrol and Rowan County Sheriff’s Office.

The driver lives just a few houses farther along the road and though shaken and chilled, was physically OK. Her car, however, was likely a total loss, compounded by what a tow company might need to do to get the vehicle out of the ravine.

“You can see where she left the roadway and the marks on her tires from where she slid,” he said. “It’s a good thing that small tree was there and that the car is fairly light. But this was a good rescue, the crews did an outstanding job.”

Greene noted that he took his wife to work in Landis where she works at a school and that water was running across a lot of the roads in the area with the hard rain, and there were a number of accidents being reported.

“Just need to remember to slow down,” he said. “Water will move even the heaviest cars.”