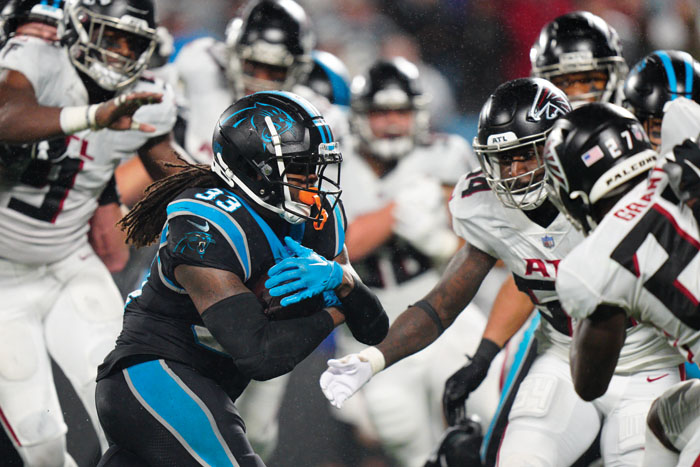 Carolina Panthers running back D'Onta Foreman runs for a touchdown against the Atlanta Falcons during the second half of an NFL football game on Thursday, Nov. 10, 2022, in Charlotte, N.C. (AP Photo/Jacob Kupferman)

CHARLOTTE — The Carolina Panthers are down, but not out, entering their bye week — thanks in large part to the emergence of D’Onta Foreman.

The journeyman running back has eclipsed 100 yards rushing in four of Carolina’s last six games, and the Panthers (4-8) remain in contention in the weak NFC South after finding an identity on offense.

Carolina is 1 1/2 games behind division-leading Tampa Bay (5-6) entering the weekend.

“My mindset, from a defensive perspective, is (there’s) nothing more demoralizing than the offense just running the ball,” said Panthers interim coach Steve Wilks, a former defensive coordinator. “You’re not going to stop quarterbacks from getting the yardage, (Tom) Brady or whomever. They’re going to pass the ball in this league. When they can run and pass, it’s a long day.”

The 26-year-old Foreman was brought in as a backup this past offseason, but was thrust into a starting role after general manager Scott Fitterer shipped star running back Christian McCaffrey to the San Francisco 49ers for draft picks following a 1-5 start.

Foreman carried 24 times for 113 yards in Carolina’s 23-10 win over the Denver Broncos this past weekend and has amassed 545 yards on the ground over the past six weeks, second-most in the league during that span.

The 6-foot-1, 236-pound Foreman fits what Wilks wants from his power running game — a strong, physical back who wears down the defense as the game goes on.

“He’s very strong, resilient,” Wilks said. “He takes a lot of pounding, a lot of beating; he can get back in there. That’s part of his makeup and how he runs. … He demonstrates the DNA that we talk about all the time, the physicality and effort.”

Foreman is the beneficiary of a vastly improved offensive line — a credit to Fitterer’s offseason moves up front.

The Panthers added free agent guard Austin Corbett from the Los Angeles Rams and center Bradley Bozeman from the Baltimore Ravens in free agency, then selected left tackle Ickey Ekwonu with the No. 6 pick in the draft. Along with 2021 third-round pick Brady Christensen moving into the other guard spot, the Panthers have four new starters on the O-line and are miles ahead of last season.

“Our offensive line is rolling right now,” quarterback Sam Darnold said. “Those guys are tough and there’s not a whole lot of defenses that want to go out against those guys right now. Not only our offensive line, but our running backs, our tight ends, the way they are blocking, our receivers, the way they are blocking. So I mean our whole run game is setting up for the pass game.”

The running game helped set up the play-action pass this past weekend, and Darnold thrived in his first start after a preseason ankle injury that landed him on injured reserve.

He connected on two big throws to D.J. Moore after getting the defense to freeze on a fake handoff because it was forced to honor Foreman in the run game.

“If I get going and put us into manageable third downs, I’ve got trust in them to convert and keep moving,” Foreman said. “Even when we come out in play-action and take our shots, it helps if the running game is clicking and going.”

Darnold said the Panthers have figured out their identity with the running game — and that has everyone believing entering the stretch.

With the defense still solid, the Panthers may just have a chance to catch the Buccaneers, whom they soundly beat 21-3 earlier this season. The teams meet again on New Year’s Day.

Carolina has one game left against a team that currently has a winning record and that will be coming out of the break on Dec. 11 against Seattle (6-5 entering this weekend).

“We just have to keep it going,” Darnold said.

And that means running the ball with Foreman.