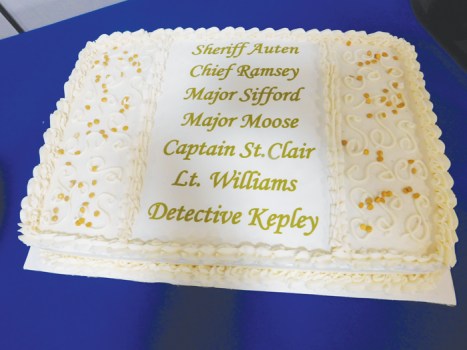 A cake celebrating all retirees who attended Monday afternoon's event honoring those leaving RCSO as of Nov. 30. Photo by Elisabeth Strillacci 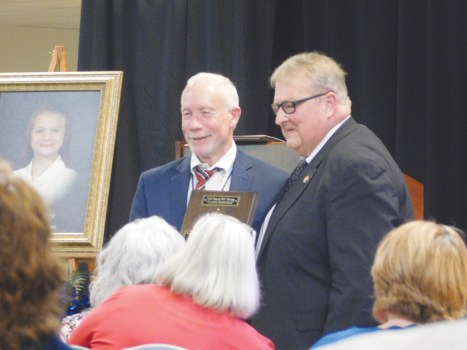 Chief Deputy David Ramsey, who joined RCSO when Sheriff Kevin Auten took over as Auten's second in command, will retire at the same time Auten does - Nov. 30. Photo by Elisabeth Strillacci 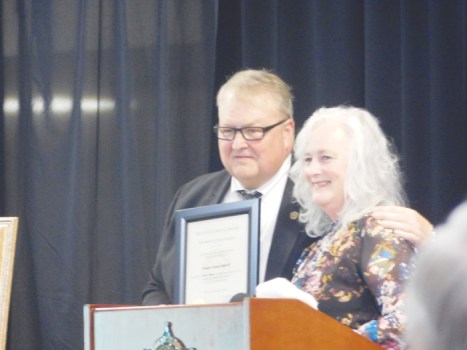 Sheriff Kevin Auten receives the Order of the Long Leaf Pine from Carl Ford's wife, Angela, who appeared on his behalf. Photo by Elisabeth Strillacci 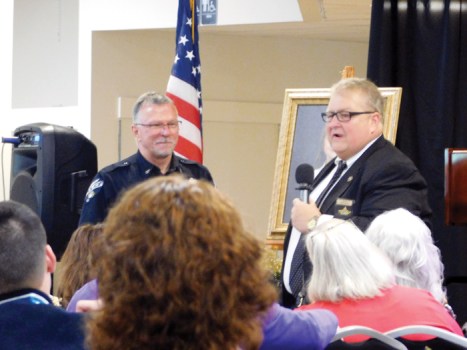 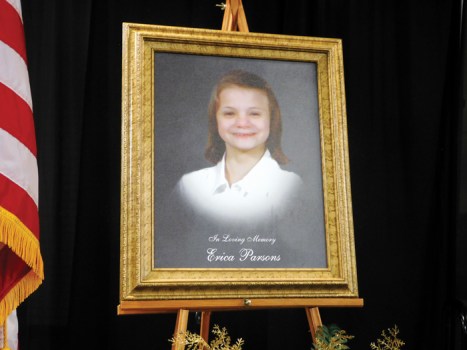 A portrait of Erica Parsons, whose horrific death was one of the most difficult and challenging cases of Sheriff Kevin Auten's tenur, and one his department solved. Photo by Elisabeth Strilacci

Nearly all of the honored retirees were present at Monday's celebration, and they were all asked to stand for recognition by County Commissioner Chairman Greg Edds. Photo by Elisabeth Strillacci

SALISBURY — There were a few tears sprinkled amid a lot of laughter Monday night as people from both the law enforcement community and the civilian community came together to honor and thank retiring members of the Rowan County Sheriff’s Office, including top cop Sheriff Kevin Auten.

Auten has served as sheriff for 12 years, but has been in law enforcement for 35 years, starting as a deputy at the age of 26. Several hundred folks came together at the West End Plaza as early as 2 p.m. to let him and eight other retirees know their dedication has been appreciated.

David Whisenant, WBTV reporter and lifelong friend of Auten, welcomed guests as the emcee, noting that he first met Auten in middle school and considers him a friend to this day.

“We never had to worry under the leadership of Kevin Auten,” said Greg Edds, chair of Rowan County Board of Commissioners. He said people can go one of two ways in a role like sheriff – “they can embarrass you or they can make you look good.  With Kevin, communication was ongoing. He’d let you know when something bad happened and when something good happened. He didn’t leave us not knowing what was happening. He has a heart for service, an outstanding character.

“He’s a real bridge builder,” Edds went on. “Being sheriff is not an easy job. In my job, I need to completely trust two people: my sheriff and my manager. Fortunately for me, I have that on both counts. I respect you as a professional, I love you as a friend, and you will be sorely missed.”

In introducing Salisbury Police Chief Jerry Stokes, Whisenant pointed out that “the face of law enforcement here is going to be changing drastically in the next few weeks. It has been awesome to see Chief Stokes work with Sheriff Auten to accomplish their jobs in unison.”

“Thirty-five years ago you made one mistake,” Stokes said to Auten. “You pinned on a star and not a shield, so we’re giving you a shield tonight.”

Mayor Pro Tem Tamara Sheffield said it’s “not often you get to make a friend of the person in charge of your overall safety,” and she and Mayor Karen Alexander thanked Auten for his years of dedication. Alexander presented Auten with a proclamation from the city in gratitude for his devotion.

District Attorney Brandy Cook brought up one of the bigger cases under Auten’s leadership, that of the death of Erica Parsons. Cook had a portrait of Parsons made for the event and praised Auten and his team for their persistence and determination.

“Kevin recognized we need to have a strategy,” she said. “He could easily have bowed to the public pressure and made arrests, but he stuck to the strategy and it worked. And combined with Lt. Chad Moose’s dedication to following lead after lead and his attention to detail, we solved the case.

“I saw the way these investigators worked with one another and the District Attorney’s office and others, and I’ll never forget the press conference when the sheriff tearfully announced that arrests had been made,” he said.

State Senator Carl Ford sent a video message and his wife, Angela, to present Auten with flags flown in Auten’s honor over the state capitol and the state’s highest honor, the Order of the Long Leaf Pine. In addition, Congressman Ted Budd sent a video message and his District Outreach Specialist Sam Shumate was on hand to present Auten with the US flag flown over the US Capitol in Washington in Auten’s honor.

One of Auten’s sisters, Kim Smyth, detailed, sometimes tearfully, the father, the brother, the son and the uncle he is, in addition to who he is as sheriff.

“He can’t retire from those roles,” she said. As a father she said he is “a very proud, very active dad,” as an uncle he “still plans the Easter Egg hung every year, and under his watch, every kid gets the same number of eggs,” and as a son, “he loves his mother like no other, cares for her needs as well as wants, and is immensely patient.”

“Dad was so proud of him already, but when he became sheriff, it went to the next level,” she said. “But Dad is proudest of him, I know, for how he loves and cares for mom.”

Valerie Risner, whom Auten dates, (he is not married, contrary to previous erroneous reports in the Post), praised Auten’s support for non-profits like the one she founded, Ray’s of Sunshine, aimed at supporting family and friends of loved ones fighting addiction.

Ramsey, who came on board with RCSO when Auten became sheriff, said he and the command staff got together to get a retirement gift for Auten and decided on a hand gun, only half joking when he related one of several stories about Auten not carrying a gun while working.

Auten later said that was true, “I didn’t want people to listen to me because they were afraid of the gun,” he said. “That’s just the way I policed.”

Chaplain Mike Taylor presented each of the retirees with honor awards and Auten had complimentary words for each, including Major John Sifford, his avowed “best friend.”

“These guys didn’t want a reception so that’s why we’re doing this all together,” Auten said. “They had to come because I can still fire them up til Wednesday at 5 p.m.

“John is my best friend, and he’s a second-generation deputy,” he added. “I used to ride along with him and watch him shuffle his feet when people didn’t want to listen to him, but he made me want to do the job. I can’t thank him enough – for everything.”

He had high praise for Moose as well.

“What he did for Erica was unbelievable,” he said. Parsons was killed by a couple, family members who had adopted her then brutalized her for so long that she died from her injuries. When her body was finally found, Moose went and picked her up and kept her in his office overnight until the coroner could come.

“He’s a tough cop, but he would not zip that bag,” Auten said. “He said she’d been in the dark long enough.”

“All these plaques have my name on them, but they should say Rowan County Sheriff’s Office,” Auten said. “I’m only as good as they are.”

When it was announced that the justice center will now carry his name, Auten joked “people will drive by and fire shots at it with my name on there,” but he did say his mother would be proud.

He said when he decided to run for sheriff, his father called him to the front porch “and that was serious,” to talk.

“He said he had one question: what was my failure plan? He said everyone needs one, an exit plan,” he said. “I told him my ego’s not that big, that I’d just go look for a smaller department and work another ten years there. He said ‘let’s go to work. I wouldn’t be here without [mom and dad].”

Seven of the nine retirees will complete their careers Wednesday at 5 p.m. Thursday morning, newly-elected sheriff Travis Allen will take over the post.