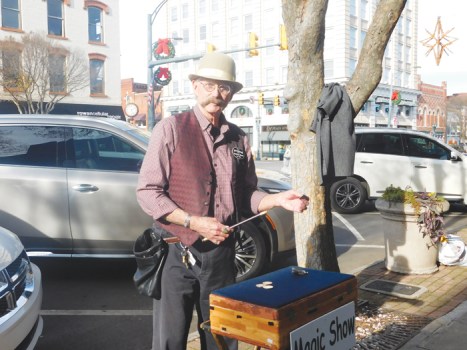 Glen Edward Yost, former figherfighter and business owner, now magician, has been hired by the city for at least a decade to provide entertainment on shopping days. Photo by Elisabeth Strillacci 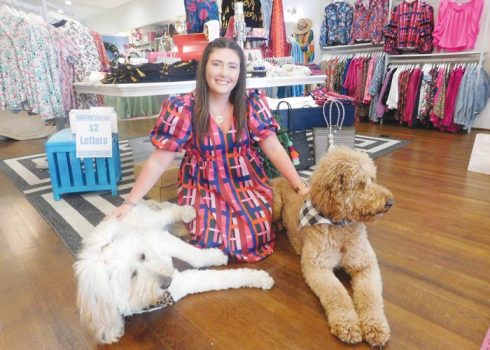 Maggie, left, and Tucker, right, are the official greeters for store owner Karlee Eagle of Oxford & Lee. Maggie is clearly a huge fan of belly rubs. Photo by Elisabeth Strillacci 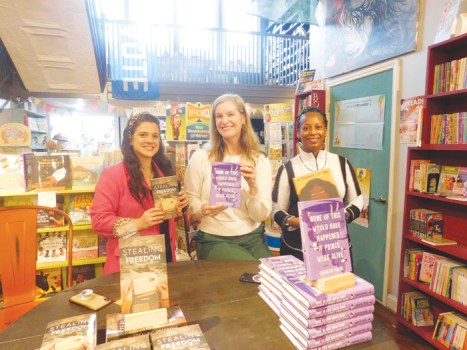 Local authors (from left) Sylvia Leontaritis (Stealing Freedom), Carolyn Prusa (None of This Would Have Happened if Prince was Alive), and Adrea Theodore (A History of Me) were on hand Saturday at South Main Book Company to provide autographed copies of their newly released books. Photo by Elisabeth Strillacci 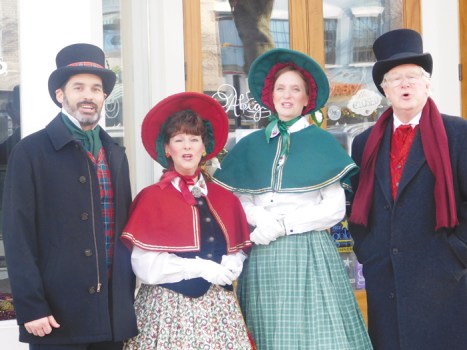 Singers from the Victorian Voices quartet were happy to sing favorite Christmas songs on request Saturday. Photo by Elisabeth Strillacci

SALISBURY — When Maggie and Tucker come to the door to greet visitors, it is important that ear scratches are the first thing addressed, even on a very busy Small Business Saturday.

The two dogs have been coming to work with Karlee Eagle, owner of Oxford & Lee, from the beginning of the enterprise, and this weekend they were both on full duty, welcoming a steady flow of customers.

“We’ve been doing really well,” said Eagle, “better than last year, and yesterday was even better than today.” She and a number of other local shops stayed open later than usual for Friday night’s Holiday Night Out. Eagle said she remained open until 9 and was “steadily busy all the way through.” The shop offers gifts and upscale clothing for men and women. Eagle said not only has she enjoyed seeing her regulars and local shoppers, but the number of out-of-town guests has gone up.

Small Business Saturday was a campaign launched by American Express on Nov. 27, 2010, to help small businesses gain exposure and to inspire consumers to shop within their own communities during the holiday season. When more money is spent at local stores, more money stays within the community. According to economic research from American Express, for every dollar spent at a small business,  about 67 cents stays within the local economy.

Dennis Lunsford, who owns The Kitchen Store, said he believes people have come to understand the importance of supporting local shops.

“A few years ago, I think people began to see the value in supporting local business owners,” he said. “Instead of big box stores or malls, I think they began to see that shopping local is a big part of supporting the local economy and community. So this year we’ve had the perfect storm: beautiful weather, COVID is not keeping everyone at home and then supporting local. We’ve been busy today and were yesterday, even up until we closed at 8.”

Shoppers filled the sidewalks even late into the afternoon Saturday, and while they made their way from store to store (stopping for lunch or treats, of course), they were entertained by Christmas songs from the Victorian Voices caroling quartet.

The Spice and Tea Exchange draws one in by the nose, and Debbie Dumont was explaining to a customer that a black tea would make the perfect Southern sweet tea.

“Our numbers are close to what we had last year, and that’s great,” said Dumont, whose son and daughter-in-law own the store. “And yesterday was even busier,” she said, smiling.

Across the street, Sweet Country Style was also seeing a steady stream of customers despite having moved not long ago from their West Innes Street location.

“We’ve had people come in and ask if we are the store that was on West Innes,” said manager Bree Cochran. “People seem to be finding us just fine. We’ve posted on social media and I think that helped a lot. But we’ve had a lot of first-time people, too, and we love that.”

The store offers gifts, accessories and clothing for women and men, including a “Nashville Room” with high-style, sparkling western boots, bell-bottom pants and sequined tops, all meant to prepare anyone for their stage debut.

The shop on the corner, Anna Craig Boutique, stayed open later than planned on Friday, because when they were scheduled to close, at 8 p.m., customers were still coming in, so the staff just stayed on. The fact that the entire contents of the store, a colorful, cheerful, appealing collection of women’s clothing, shoes and accessories, is 30 percent off right now may have had a small part, but the shop, like many others in downtown, has a strong local following.

“I’ve been doing this for about 10 years, and the city hires me,” he said. He was both a firefighter for the city and ran his own sign shop for years, but eventually decided to retire and engage in the pleasure of magic and nothing else.

“It means that for all my years of work, I never woke up any Monday and didn’t want to go to work” he said. Playing in a band put him on stage many a time, so performing is part of his history, and between the magic and the music, he’s travelled the world. Still, he enjoys sharing a little sleight of hand with shoppers.

And it wasn’t just about clothing, homegoods, spices or magic. Shoppers had opportunities to find some great reads as well.

Alissa Redmond of the South Main Book Company hosted seven authors for book signings, five of which are from Rowan County.

“It’s a great way to get folks to know the authors from right here,” she said. She believes in helping new authors find their hometown audiences.

On hand Saturday afternoon to sign copies of their latest works (or their first) were Carolyn Prusa (“None of This Would Have Happened if Prince was Alive”), Adrea Theodore (“A History of Me”), Sylvia Leontaritis (“Stealing Freedom”), Margaret Basinger (“‘Tis the Season with Belle and Chuck”), Charles Newsome (“Just Say Yes”), Kathy Vestal (“Childress Cousins”), and Dicy McCullough (“I’m Tired of My Bath”).

Many said they were pleased to have a chance to introduce people to their work, but Prusa said she was “excited to talk to human beings.” She said so much has been done over social media that she has craved the chance to just talk to other people face to face.

And if all that wasn’t enough, many of the local restaurants and coffee shops were open so shoppers could refuel and re-energize and keep going. Mean Mug Coffee said they were seeing strong business yesterday and today, and there were a few “pending coffee” tags hanging on the wall as well. Anyone can purchase a “pending coffee” for the future benefit of someone who could really use a cup, but can’t quite swing it.

In addition to Black Friday and Small Business Saturday shopping, a number of the local shops downtown are participating in a sort of shopping Bingo, explained Redmond. Guests receive a bingo-like card, with all the shops in a divided square. When you visit a shop, ask for a sticker or a stamp, and if you fill in all the squares, put your name and contact info on the back and drop it at any of the shops.

“We all got together and came up with some really great prizes for the drawings, so it’s worth it,” said Redmond. She said shoppers should hold on to the cards, since they don’t have to be completed until Dec. 16. “You don’t have to have it done tomorrow,” she said.

A last dedicated shopping day remains, slightly extending the weekend. Monday is Cyber Monday, and while small, local shops may not be top of the mind for online sales, most now have online shopping available.

“It’s important that people do know how much we appreciate their patronage in our stores,” said Eagle.