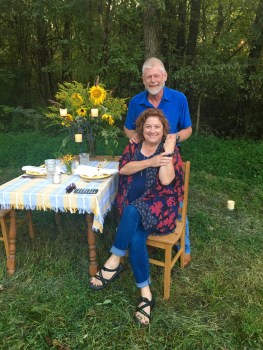 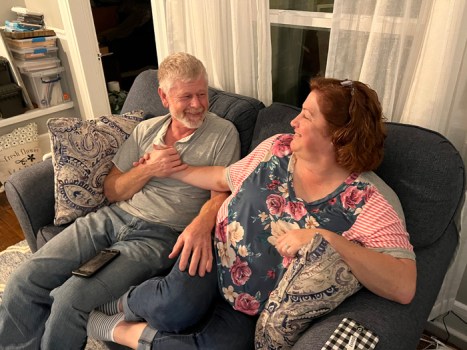 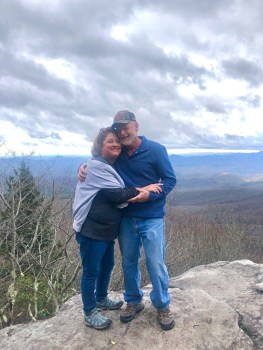 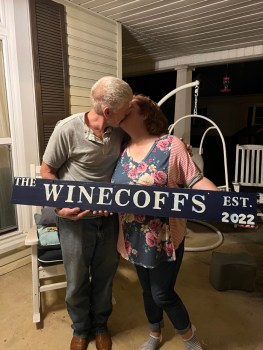 Lynda Hunter and Everette Winecoff on the porch of ‘The Little Yellow House’ in China Grove. Susan Shinn Turner/For the Salisbury Post

CHINA GROVE — Lynda Hunter and Everette Winecoff were looking for each other. They just didn’t know it.

“We were both in a place that we were lonely,” Lynda says. “We had kids, jobs and church, but we were still lonely.”

Fortunately, they had a mutual friend. Lynda and Jennifer Price had taught at Bostian Elementary together. Lynda now teaches fifth grade at Millbridge Elementary, where she’s in her 30th year of teaching.

“Are you sure you don’t know any 50-year-old single men?” Lynda kept asking Jennifer.

Everette, a diesel mechanic by training, often does odd jobs for family and friends. And he’d just switched out Jennifer’s washing machine.

“I have someone for you to meet!” Jennifer told Lynda.

Jennifer gave Everette her friend’s number. On July 11, he called Lynda and left a voicemail in which he sounds pretty nervous — OK, REALLY nervous — inviting her to dinner.

Neither of them had dated in decades.

Two days later, he came to her house to pick her up.

When he came to the door, he introduced himself, took her hand and covered it with his other hand. Nice touch.

“We just started talking and it was easy,” Lynda says. “There was no need to put on airs.”

“She’s worth it,” Everette says.

They walked out of the restaurant holding hands. Then they went to Bell Tower Green and sat in a swing for the next three hours, talking even more. Probably still holding hands.

The next evening, they went to a concert in China Grove’s Hanna Park, enjoyed a boxed dinner from Tea for Two and walked home.

Lynda recently moved into a home in China Grove she affectionally calls “The Little Yellow House.” She’s spent the past two years fixing it up with help from family and friends.

“We were sitting right there in the den and I was holding her,” Everette recalls. “I have never been so relaxed. That night, I fell in love with her.”

When asked why he loves her, Everette replies, “Her love for God, her work ethic, her love for me. And the obvious, she is beautiful.”

Lynda, on the other hand, was a little more guarded.

She was preparing for a girls’ trip and would be away 10 days. The day before she left, she realized she just had to see him.

“I drove over, and we stood in the driveway and talked,” Lynda says.

Everette told her, “There’s something I need to tell you.”

“I need to say this before you leave,” he said. “Remember while you’re gone that I love you.”

“It was bubbling up and I could not keep it in,” Everette says.

“I told her it was fine,” Everette says. “But I wanted her to know where I stood.”

During Lynda’s trip, the two texted a few times and talked on the phone some.

At one point on the road trip, Lynda was looking out the window and something occurred to her.

“Dummy!” she told herself. “This is what you have been praying about for years! What are you doing?!?”

Lynda got home on a Sunday, the day that just happened to be Everette’s family reunion. When she got there, she knew nobody but him.

She called him when she arrived, and he came running out to meet her.

“He wrapped his arms around me and hugged me but I said, ‘Hang on! There’s something I have to say.’

“I was extremely excited,” Everette says in his typically understated way.

“And then we went in and met the whole family,” Lynda says.

By August, they started talking about getting married. They started planning a big wedding for June 2023. When the guest list passed 300, Lynda decided it was just too much.

They decided on Thursday, Nov. 10, at First Reformed Church, with 36 of their family and closest friends. Lynda wore a gorgeous aubergine (deep purple) dress from Virginia’s in Kannapolis, while Everette wore a crisp white shirt, black vest, black jeans and his trademark cowboy boots.

After their wedding, they spent a long weekend in Boone, and are planning a longer honeymoon next summer to Zion National Park in Utah.

Before the wedding, however, Lynda had something important to take care of. She’s still close friends with Brad’s mom, Sylvia.

“It was important for me that she meet Everette and approve of our decision,” Lynda says.

So they got together with Sylvia and Lynda’s two children, Cierra, 23, and Riley, 21, over Labor Day weekend for breakfast.

“I told them I loved Lynda with all my heart,” Everette says. “They all three agreed. They were on board and we had their support. I was a nervous wreck until then.”

Everette’s family has a 40-acre farm on Gheen Road.

Lynda had remarked it would make a wonderful place for a picnic. The evening that Everette asked her to marry him, he’d set up a picnic in a quiet corner of the farm. He’d prepared steaks, baked potatoes and salad, and hid them in a picnic basket in the back of the farm truck.

When they arrived at the table, which sister Eva had helped set up, he said, “There’s just one more thing. Lynda Anne Hunter, would you do me the honor of making me the happiest man in the world and marrying me?”

The Winecoffs are spending Thanksgiving with Lynda’s family in Colorado.

So far, the second time around is “beautiful and peaceful,” Lynda says.

Looking back, Lynda says, “I didn’t know I was still sad until I wasn’t sad anymore. We all have pasts. Our stories made us ready for each other and prepared to love each other.”