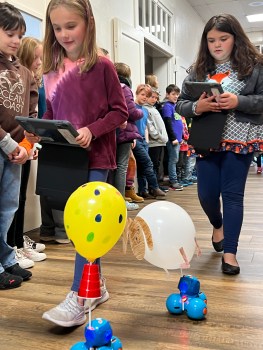 Jolene Nutt, left, and Cambrie Craig guide their robot-led balloons down the halls at Rockwell Elementary. 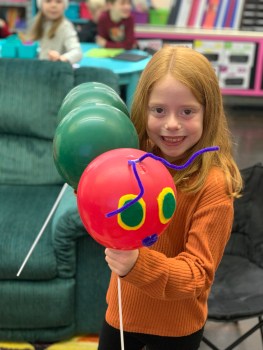 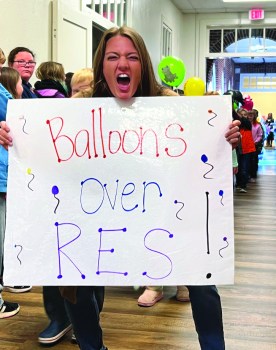 Jessice Kepley led the students as the marshal during the Balloons Over Rockwell parade. - Submitted 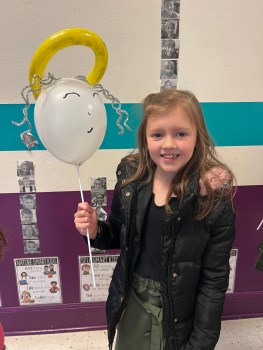 Brylee Trexler's balloon was dedicated to her sister Rylan, who died before Brylee was born. 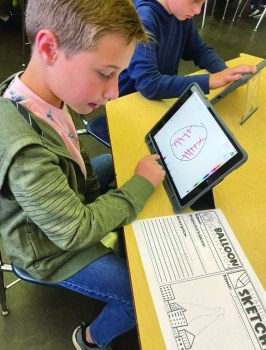 Finn Blankenship uses his planning sheet to draw his balloon idea on the iPad using the Seesaw app. Submitted photo

ROCKWELL — Every year, millions of people around the U.S. tune in for the Macy’s Thanksgiving Day Parade, but students at Rockwell Elementary School beat them to the punch and hosted their own parade on Monday.

The annual Balloons Over RES event features second graders and their balloon creations. It is part of a curriculum learning point, but the teachers say that the creativity that comes out of the project is the best part of every year.

“It’s kind of a crazy time during this part of the school year, so we wanted to do something the kids would enjoy that allows them to show their creativity,” said second grade teacher Jessica Kepley.

The school goes to great lengths to give them an authentic parade experience.

“We play music over the whole intercom, so it’s like being at a real parade,” Kepley said. “It pumps up the kids. They might be nervous being in their first parade, but all in all, it’s a great way to show off what they can do.”

Balloons Over RES began four years ago when the second grade teachers created a unit around the book, “Balloons Over Broadway: The True Story of the Puppeteer of Macy’s Parade” by Melissa Sweet.

“We researched the real Macy’s Thanksgiving Day Parade and how it came to be,” said second grade teacher Amanda Trexler. “We talked about how a man had a dream, created a plan, and followed through with it. We want to teach each student how to create a plan and work hard to achieve it.”

Second grade students enjoyed reading that book aloud and learning about Anthony “Tony” Sarg, the creator of Macy’s Department Store’s first puppet window display and street parade in 1924. They also independently read an article and watched a video on Scholastic News (“Fun that Flies”) detailing the work that goes into the current creation of oversized balloons for Macy’s Thanksgiving Day Parade.

Students drafted a balloon proposal, describing in detail what their balloon would look like and the materials needed to create it. Finally, they sketched what they were visualizing. Once the teacher approved their proposal, each student reimagined their balloon sketch on their iPad, using the Seesaw app to give the balloon color and detail. Students were then given supplies to bring their balloon creations to life.

After learning about how balloons are created for Macy’s Thanksgiving Day Parade, students spent the week leading up to Balloons Over RES planning and designing their own balloon creations.

Then, when the big day came, all Rockwell Elementary students and staff lined the hallways of the building. Kepley served as the parade marshal.

“I’m a vocal person,” Kepley said with a chuckle.

The teachers agreed the parade generates a lot of enthusiasm for the kids to engage in a creative process.

“Their excitement to show off their balloons showed that they achieved their goals and were so proud of themselves,” Trexler said.

Trexler indicated that the parade can have an empowering impact as well.

“There are kids who don’t ever get to see parades, but now they get to be in one,” Trexler said.