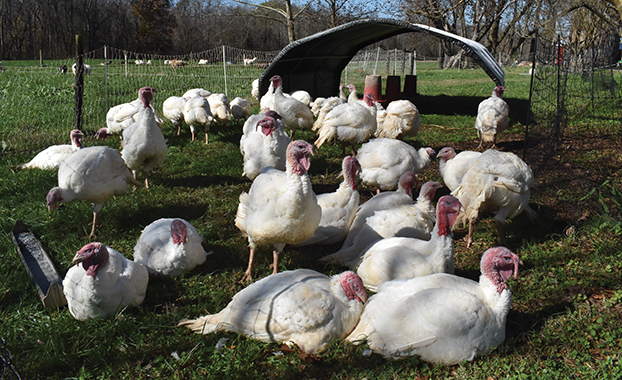 BOLIVIA — While most people only think about turkeys around meals on the holidays, Maud Kelly enjoys watching them wobble on her family farm in Bolivia.

“I raised quite a bit this year and it’s the most I’ve ever raised,” she said. “It’s a crazy amount of work. They are really wacky birds. They’re fun, but they are a lot to keep up with. It’s like having 25 toddlers running around.”

Greenlands Farm, a sustainable homestead farm located in rural Brunswick County, has been in the family for three generations. They began raising birds in the 1980s before taking a hiatus. Work resumed in the early 2000s, with tours of the farm in the later years.

Kelly got into raising rare breeds such as the Heritage Midget White Turkey, which are around 8 to 12 pounds.

It’s an alternative to raising commercial birds, which takes 12 to 14 pounds to mature for processing. The heritage turkeys on Greenlands Farm take about 6 to 7 months to mature on 16 acres of land.

“There’s a lot of care and cost that goes into raising them for that long,” she said. “But the meat is definitely superb compared to a commercial turkey.”

With the Thanksgiving holiday coming up, they are ready to take orders for fresh birds — an alternative to the frozen types.

Raising turkeys is a job that comes with challenges. For Kelly, one of them is a rise of feed cost, which has gone up 15% since 2020. It cost about $2,500 every six months.

“It’s costing us twice as much to feed them, compared to when we first started,” she said about the turkeys. “I call them little pigs on two feet. My other birds don’t eat as nearly as they do.”

Kelly is picky about what they eat. When supplies are available, they try to feed them non-GMO food and high quality things.

“We humanely raise them and process them, and they get a few hugs from me here and there too,” she said. “They are really sweet birds. They are quirky little birds. Anytime I have a conversation and laugh, they laugh with me.”

As the Wilmington area continues to grow, Kelly believes turkeys will continue to have a place in the economy, especially places like the farm offering agritourism. A lot of support comes from New Hanover and Brunswick counties.

But the commercial and residential growth comes with challenges, such as wildlife being displaced. To keep her birds safe from predators, she added livestock guard dogs.

“That’s been within the last three years,” she said. “Before then, I would walk out and there would be 30 birds dead from a fox. It’s heartbreaking. My birds may be breeders or raised for meat, but they are loved every day by us. I’m a little different than some people. I love my animals no matter what they’re here for. It’s devastating to see that.”

Despite the obstacles, turkey farming in the region is not going away anytime soon in the Wilmington area, especially with North Carolina being ranked second in the nation for turkey production.

According to officials from the North Carolina Poultry Association and the U.S. Poultry & Egg Association, companies that produce and process turkey are an integral part of local counties. This is done through giving supplies and materials to the industry, creating jobs, and distributions to state and federal taxes.

A 2022 economic impact study of the poultry industry by John Dunham & Associates showed the turkey industry was responsible for $44.11 million in total economic activity and created or supported a total of 225 jobs in Brunswick County.