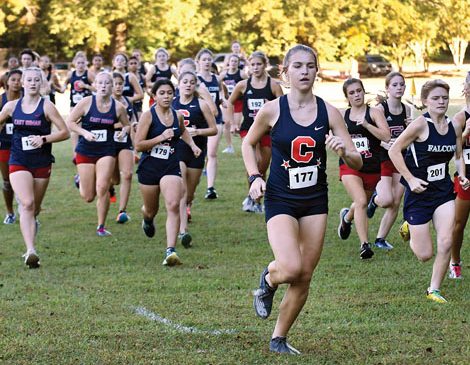 Carson’s Makayla Borst (177) led the way in cross country this season. File photo by Wayne Hinshaw, for the Salisbury Post

That was the selling point that persuaded soccer athlete Makayla Borst to give cross country a try when she was a Carson freshman.

“I don’t think Makayla really liked running all that much, at first, but she found out she was very good at it,” Ihme said. “Cross country is a hard sport. A lot of the fun comes from winning, from becoming good enough at it to be on top. Makayla is super-competitive. She liked being on top.”

Borst is now a senior. Cross country has become an integral part of her life and a big part of who she is.

She’ll be running for Pfeiffer University and coach Bob Marchinko next year.

Borst is honored as the Post’s Runner of the Year for the second time. She and teammate Camden Corley were co-winners for the 2020 COVID season. Corley edged Borst by less than a second in the Rowan County Championships. Then Borst led the Cougars to a conference championship and a strong regional showing.

Borst placed ninth in the county meet as a freshman. After that close second as a sophomore, she was third as a junior. She broke through for her first county title this season, fulfilling a vow she made to Ihme more than a year ago. She clocked 21:06 at Dan Nicholas Park, held off West Rowan’s Katie Roberts and paced the Cougars to their fourth straight team title.

“Winning the team championship every year I ran was important to me,” Borst said. “The best part of cross country was always the team and the friends you had from being part of that team.  Especially this year, as a senior, it was a chance to pull everyone together and make sure everyone was happy.”

Winning the county championship is something Borst will never forget and competing in the state meet on the biggest stage on the final day of the season is always a big deal.

But Ihme and Borst agree that the defining moments of this season for Borst came in the 3A Midwest Regional in Kernersville. That’s the meet in which Borst turned on a big finishing kick to finish fifth with a PR (personal record) of 20:51. It was her fastest time since the COVID season.

“I’m getting close to the end of the race and I can see the clock says 20:30, and I know I’ve got a chance to PR,” Borst said. “That was exciting because I haven’t gotten a PR since sophomore year. I saw I could do it, and I did.”

“That last half mile or so the light bulb just came on and she started passing people, and that last 200 yards, she passed three more,” Ihme said. “Just so competitive, chasing that PR. She beat her previous PR by one second. But a really important second. That PR was huge for her.”

She didn’t PR at the 3A State Championships that were held at the same venue. That was a much tougher day in terms of weather, with temperatures climbing to 78 degrees as the 3A girls ran in the late afternoon. She was timed in 21:39 and finished 41st.

During her career, Borst has run in all kinds of environments. The late-starting 2020 COVID season pushed into January 2021, and Carson was competing in the 3A West Regional that season. It was snowing in Hendersonville.  Borst gutted out a 21:05 that day.

Borst is still a fine soccer player for coach Lauren West. She has a six-goal game on her list of accomplishments. That explosion came in a match against Central Cabarrus in which she sparked the Cougars to a 7-3 victory.

But it looks like it will be those four straight county cross country championships that will be Borst’s lasting legacy at Carson.

During those four years, she’s made the transition from quiet introvert to team leader.

“She led us in everything — warmups, stretches, workouts, and then the races,” Ihme said. “She was a great role model to her younger teammates, showed them exactly what it took if they wanted to reach the level where she was at. She’ll never be loud and she wasn’t necessarily going to talk the talk, but she always walked the walk.”

The All-Rowan County team consists of the top 12 finishers in the Rowan County Championships.