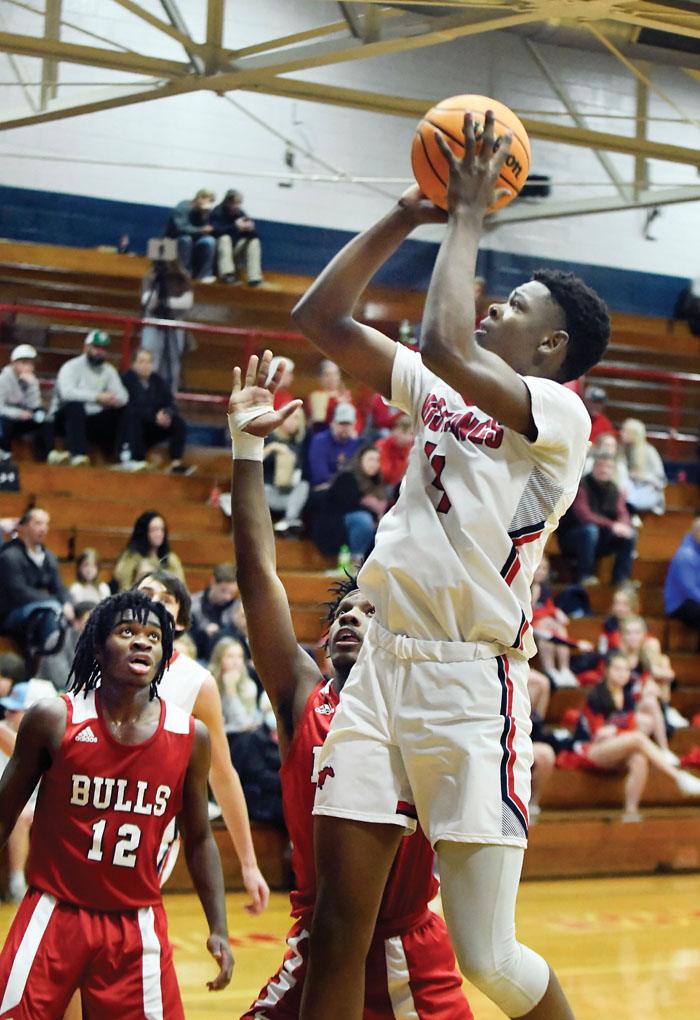 Seventh in a series of reports on local basketball teams.

The 6-foot-6 Harris, who came to East from Virginia, turned out to be a really solid all-county player, but he wasn’t overwhelming. Harris’ 31-point effort against Mount Pleasant on opening night turned out to be his season high and by quite a bit. He scored 20 or more five times and averaged a double-double — 14.6 points and 10.8 rebounds game — but that wasn’t enough to get East over the hump. East’s offensive numbers were actually down from the previous season. The Mustangs won only seven games overall and the only truly satisfying victories came against SPC opponents Northwest Cabarrus and Carson.

East’s season ended early, with a 53-27 loss to Carson in a play-in game to get into the South Piedmont Conference Tournament.

In comic-book terms, Harris was Batman as a junior, but East needed Superman to move up in the SPC. The good news for the Mustangs is it’s possible they’ll see the red-caped hero who can fly on a regular basis this season.

“As a senior captain, we want Tee to lead, to take command,” East’s third-year head coach Andrew Porter said. “He had a great summer and made big gains with his jump shot. He’s going to be able to shoot it over people, and he’s going to be knocking shots down. He was good last season, but he’ll be a more complete player as a senior.”

East has a legitimate 1-2 punch. Guard Dylan Valley was the Mustangs’ leading scorer as a junior with 15.9 points per game. Like Harris, Valley scored 20-plus five times. He had a high of 27.

Valley can play the point, although East wants to use him off the ball most of the time to increase his scoring opportunities. Even with a COVID-shortened sophomore season and an eye injury that cost him a game last season, Valley has a chance for 1,000 career points.

“Dylan can score and like Tee he’s being more vocal as a senior and pushing our other guys,” Porter said. “He’s added to his game every year. Opponents try to take the 3-point line away from him, but he’s taking it to the basket and finishing better than he ever has. He’s got a really nice pull-up. He’s added a floater. He’s aggressive, he’s going to attack, and he’s got the mindset that people are going to have to stop him.”

Porter has the luxury of knowing he’s going to get 35 to 40 points from the Harris/Valley combination most nights, but it will be improvement by the other Mustangs that determines how much damage East can do this season.

“We lost five games last year that we could’ve won, and that’s the difference in being in or out of the playoffs,” Porter said. “Guys are working hard, and we’ve been putting in most of our time on the defensive end in an effort to win more of those 50/50 games. We’re preaching defense, defense, defense. We’ve had a good vibe, a lot of really good energy as we’ve gotten ready for this season.”

There were no headline transfers, so improvement for the Mustangs is going to have to come from within, from players who have been in the program and have gotten stronger and more mature.

Porter tabbed Jonathan Wemboula, a 6-foot-3 junior who showed some flashes last season, as the most likely breakout candidate.

“He’s improved big-time and can be an inside-outside guy for us,” Porter said.

Guard Tijon Everhart will be important as a ball-handler, driver and distributor. The junior has the quickness to create for teammates and he can get to the rim.

Garrett Lee, a forward who was promoted to the varsity as a freshman at mid-season, scored in double figures twice, averaged 5.7 points per game and should have a bright future.

Jaden Sprinkle, a junior guard, will have a big role and could take some off the scoring pressure off Harris and Valley if he can make 3-pointers.

“He’s a talented shooter who can stretch the floor,” Porter said. “He’s crafty. He knows how to get his shot off.”

Juniors Jaquare Jones and Tyquan Danzine are aggressive defenders who will add quickness off the bench.

“He’s got skills,” Porter said. “He could be a surprise.”

Versatile Jordan Brooks is a swingman who can defend at just about any position, so he’ll be a factor.

William Chesney and Ahmed Ali will be counted on to bang inside and rebound. Ali is making a return to basketball after being away from the game.

Whitt Hoesman can help as a shooter, but he’s been slowed by a back injury.

“We’re still a little young, but I do like this team,” Porter said. “They get after it. I know they’re going to play hard every night.”