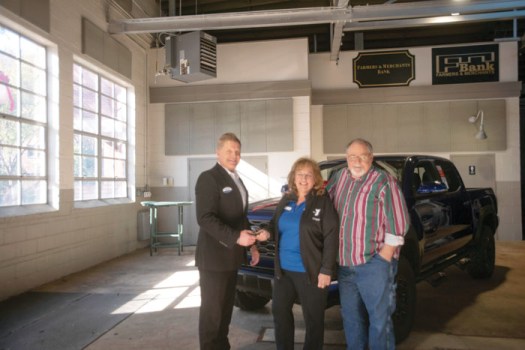 Ron Lovelace from the Cloninger dealership hands off the keys to a truck that's one of a number of cars that Susan Thomas, winner of the $25,000 toward a new car, and her husband, Chris, could select. Thomas was one of 12 people whose names were drawn for making donations to the United Way during the annual campaign. Photo by Elisabeth Strillacci 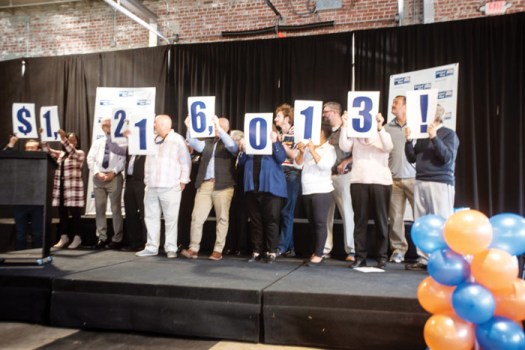 Campaign division leaders held up cards, after announcing their team results, to show the entire amount that has been raised so far. Photo by Elisabeth Strillacci 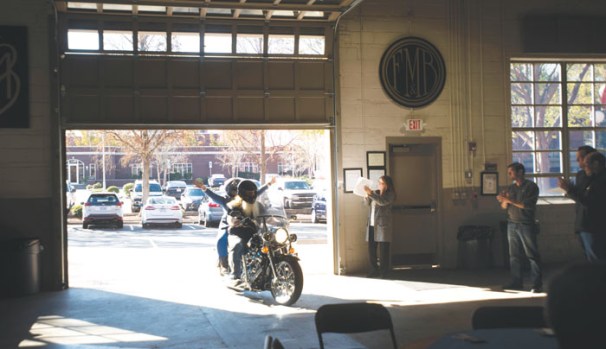 Susan Thomas and her husband, Chris, knew hers was one of 12 names drawn for the chance to win $25,000 toward a new car from Rowan’s United Way and local dealerships, but she never really thought she would win.

So on Friday, Nov. 18, when it was down to Thomas and one other person, when her only remaining competition was eliminated, Thomas threw her head back and laughed out loud with joy.

“We will work it until the end of the year,” she said, noting that they are already so close to their goal that she has “every hope” that they will make it.

The goal this year has been $1,375,000, and as of Friday, the organization had raised $1,215,512, or 88.4 percent of the total. As a thank you, the organization, with the assistance of largesse from four local dealerships, has always offered just over $16,000 toward a new car to someone who makes a donation of more than $78 for the year. This year, however, the group, including Team Auto Group, Gerry Wood Auto Group, Cloninger Automotive Group and Ben Mynatt Nissan, decided to increase the amount to $25,000.

“A lot of institutions struggled over the last few years, but we’ve been very blessed, and we wanted to share those blessings with the community,” said Ron Lovelace of Cloninger.

During a closing ceremony and lunch at F&M Trolley Barn Friday, campaign Chairman Micah Ennis, who arrived on a motorcycle, thanked everyone in attendance and everyone who was not, but who donated to the campaign.

“The last three years have been difficult, but we’re all still here,” she said. “We are here to make sure that the individuals who need them have access to all the programs available. And that happens because of your donations.”

Guest speaker Terry Osborne praised “all the doers and dreamers here” for their commitment to all United Way offers. Osborne has been a teacher, a baseball coach, the clerk of court, a candidate for state house, chairman of the Rowan County Republican Party, director of Rowan Vocational Opportunities and general manager of the Rowan-Kannapolis Alcoholic Beverage Control, as well as the recipient of the Order of the Long Leaf Pine.

“I hope we all will continue to seek ways to contribute,” he said. “The words of a country song “Til You Can’t” are a great explanation for why we all need to do what we can, while we can.” He shared some of the lyrics: “If you got a chance, take it, take it while you got a chance. If you got a dream, chase it, ’cause a dream won’t chase you back. If you’re gonna love somebody, Hold ’em as long and as strong and as close as you can — ‘Til you can’t.

“So take that phone call from your momma and just talk away, ‘Cause you’ll never know how bad you wanna ’til you can’t someday. Don’t wait on tomorrow ’cause tomorrow may not show. Say your sorries, your I-love-yous, ’cause man you never know.”

Lee, who thanked Osborne for both his words and his dedication, told the audience that the ceremony marked her “favorite day of the year with United Way. Not only are we having a great campaign, but over the last nine months, we have had 25 volunteers working on grant applications with us to keep these programs going, and to help make sure your money is going exactly where it needs to go.”

Thomas, who has worked for the YMCA for the last 26 years, said the Y has been a partner agency with the United Way for many years, and she has had multiple opportunities to work with and through United Way. When finalists were asked what they would do with a new car, Thomas’ story, said Ennis, “won the heartstrings vote.”

“Well, I have five children, and they have all had new cars, and my husband has had a new car, but I have not,” she said.