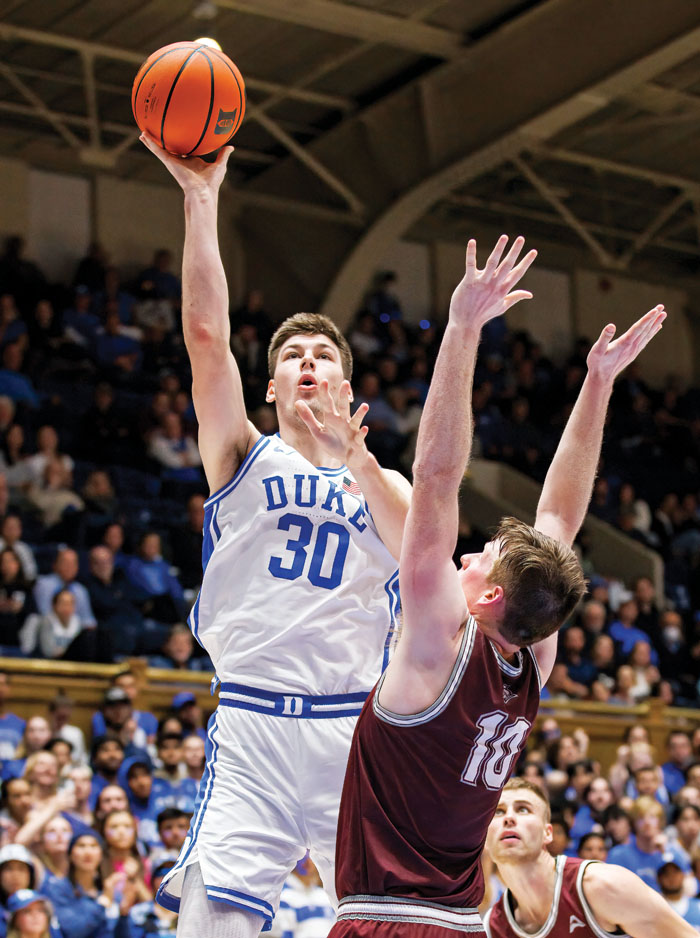 DURHAM — Over and over, No. 8 Duke went outside at Cameron Indoor Stadium.

Kyle Filipowski scored 18 points to lead Duke in scoring for the fourth time this season in a hard-earned 74-57 win over Bellarmine on Monday night.

More than half of Duke’s points came on 3-pointers.

“We get up a lot of those shots here in Cameron,” guard Jeremy Roach said. “I think it’s a normal thing. We knew their defense was going to cover the paint, so we wanted to be shot ready.”

The Blue Devils (4-1) had five players with at least two 3-pointers as part of a 14 for 35 team effort from beyond the arc.

Jacob Grandison scored 16 points off the bench on 4 for 6 shooting on 3s and Roach provided 10 points for the Blue Devils. Filipowski shot 3 of 5 on 3-pointers.

“When you take the right shots, they’re going to go in,” Duke coach Jon Scheyer said. “We had great quality in our shot selection.”

“You pick your poison,” he said. “Give them credit, they made the shots.”

Curt Hopf and Juston Betz both scored 11 points for Bellarmine (2-3), which was within 12 points with about eight minutes to play.

“We moved forward the last two hours,” Davenport said. “My perspective (is) the moment we started our pregame shooting until the horn sounded was a great example of what our program is about. We competed. We played for each other.”

Duke has won twice at home since last week’s four-point setback to unbeaten Kansas in Indianapolis.

The Blue Devils shot 52% from the field in the first half and led 41-33, with the lead trimmed in half in the final seven minutes after being up by 16.

Duke hit six 3s among its first nine field goals on the way to a 25-12 lead. By then, the Blue Devils understood the ideal approach to identifying good shots.

Five Blue Devils hit 3s across the first eight minutes of the second half.

Duke had 18 assists on its 25 field goals and a season-low eight turnovers.

“I thought we had some really unselfish plays sharing the ball,” Scheyer said. “It’s going to be the recipe for us going forward.”

Bellarmine: The Knights showed good discipline in working the shot clock and often ended up with quality shots. But they didn’t have enough answers at the defensive end to pull off an upset.

Duke: The Blue Devils launched lots of 3-point shots, but they were generally in good position for most of those. They were forced to play some hard minutes on defense and generally proved up to the task. This was by far the closest of their four home games this season under first-year coach Jon Scheyer.

This was Bellarmine’s third game against an Atlantic Coast Conference team, beating Louisville and losing at Clemson. The Knights have visits to UCLA and Kentucky lined up before the end of November. … This was Duke’s first game with more than 10 successful 3-point shots. The Blue Devils combined for nine 3s in their last two games.