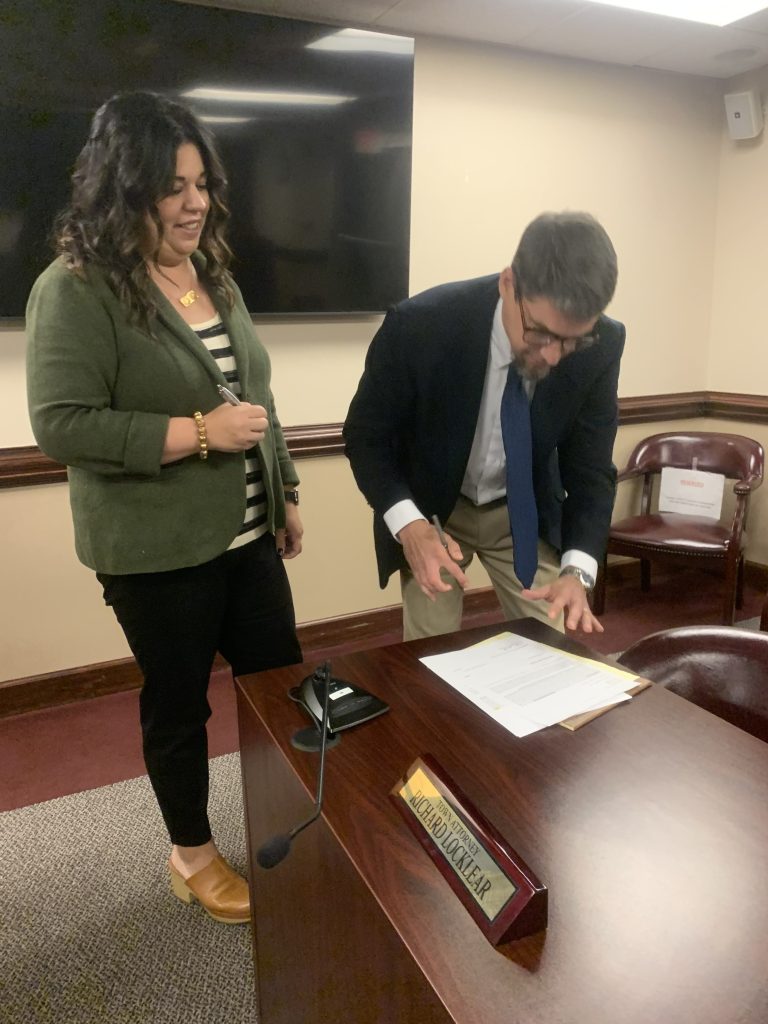 LANDIS — Starting at the end of the month, Landis will have an interim town manager.

During a special meeting at city hall on Thursday, the Landis Board of Aldermen approved the hiring of Phil Conrad to temporarily replace outgoing town manager Diane Seaford.

“I am excited about the opportunity here with the town of Landis,” Conrad said. “I think there is a lot of potential to work with the board in this transition as they look to find a full-time manager for the town. I am excited to be on board and getting to know the employees and the people of Landis.”

Conrad has lived in Rowan County for about 20 years. He was previously a full-time town manager at Granite Quarry. His wife is a teacher at Shive Elementary School in Rockwell.

“I think that it is a good choice,” Mayor Meredith Bare Smith said. “We are sad to see Diane (Seaford) leave, but we have to continue moving on.”

“We are excited to see where we are going to go,” Alderman Darrell Overcash added. “I believe he will do a good job for us. We are going to miss Diane for sure, but it’s her choice to leave. It’s a bad day, but time moves on.” Conrad’s contract will run through March 31 of next year.

The contract he signed outlined multiple responsibilities as the interim town manager, but his primary responsibility will be “executing the fiscal year 2022-2023 town budget based on input from the town department heads and town Board of Aldermen.”

Per the contract, Conrad will be paid $55 an hour. In addition, the town will contribute a matching percentage for Conrad in the local government retirement system for a minimum of 20 hours per week. The number of hours he works each week will be based upon need. Those hours could fluctuate in December due to the holiday schedule and any personal family obligations or illness.

Conrad is a nationally certified planner with a bachelor’s degree from Davidson College and a master’s degree in city planning. He is married to Melissa Bunch Conrad. They have two daughters who both graduated from Jesse Carson High School and both attend the UNC Chapel Hill.

The town will begin the recruitment process for a permanent town manager in January of 2023.

Although Seaford was originally slated to finish out the year, the Landis Board of Aldermen approved an expedited timeline on Monday during its regularly scheduled meeting. As a result, Seaford’s last day will be Nov. 29. During the Monday meeting, Seaford delivered a farewell message.

“Since this will be my last board meeting, I did want to take a few minutes tonight and, first of all, thank the town staff for everything that they have done,” Seaford said. “My last day with the town will be Nov. 29, and I just want to thank all the citizens, the leadership team, and all the employees of the town for the support that they have given to me and to (the board) over the past couple of years.

“It has been a privilege and an honor to work with this team. I look forward to seeing how the town continues to grow and prosper and provide excellent services to our citizens. I am confident that you will find someone who will help continue that path forward, and I thank you for allowing me to be part of the team.”

“Thanks for your work, for being here with us, and for putting us from where we were to where we are,” Overcash said. “We are in a whole lot better shape, and I think you have left us in good hands. I wish you well.”

A teary-eyed board member Katie Sells added, “Diane, thank you so much for everything you have done for this town. You have brought us a long way in a short period of time. I will treasure the friendship I have with you, and I wish you all the luck.”

One alderman took the opportunity to issue Seaford an apology.

“I appreciate the things you did,” Alderman Tony Corriher said. “I wish things had been different in a lot of areas and that you would still be here for a few more years. I want to apologize for some of the people for the way they have treated you while you were here … we won’t ever be able to repay you for what you have done.”

“I hope life’s journeys, both professionally and personally, are the direction that you and your family want,” Stewart said. “It’s easy to see the impact that you have had.

“Know that you will be missed here in the town of Landis. I appreciate the opportunity of working and getting to know you as well.”

The mayor also commended Seaford for her work.

“We came from a really low place to a higher place, so we appreciate that,” Smith said. “I know there are a lot of people that will miss you and your presence.”