High school girls basketball: Not as deep, but Hornets will be among the best in 2A 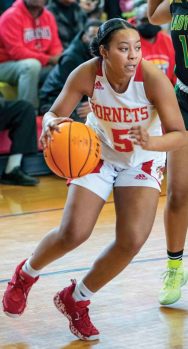 Salisbury’s Kyla Bryant will be a key figure for the defending state champions this season. File photo by JON C LAKEY / FOR THE SALISBURY POST. 1/15/22, Salisbury,NC. 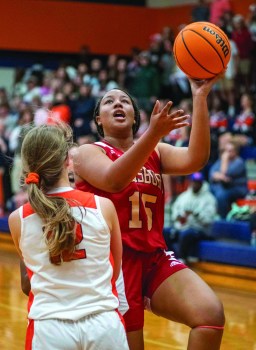 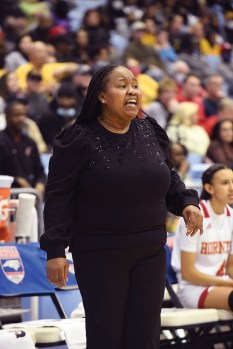 Sixth in a series of previews on local basketball teams …

SALISBURY — The Salisbury girls, defending state champions, won’t have the overwhelming depth they enjoyed in 2021-22, but they still could be one of the best in 2A.

It’s possible the Hornets can be great again, although there will be less margin for error this time around. Foul trouble will hurt more than it did last season. An injury or illness to one of the starters could be devastating to the Hornets’ hopes. Last season, it would have just been next girl up.

“We’ve got what I think will be a great five and I’m praying we’ll stay healthy,” Salisbury head coach Lakai Brice said. “We’ll have to play smart and stay out of foul trouble.”

The Hornets were exceptional on both ends of the floor last season, seasoned and tough, and they won the 2A state championship with a 28-1 record. They overwhelmed opponents. They won league games by frightening scores — 77-11, 79-13, 73-4, 75-9, 74-3, 74-5. They won every Central Carolina Conference game by more than 20 points. They beat a really good Carson team, which won 25 games and made the fourth round of the 3A playoffs, by 16.

The Hornets averaged 66 points per game, while allowing 29, so their average outing was a 37-point romp.

And when the going finally got tough in the Western Regional final against Shelby, they had enough guts to fight through it. Winning that fierce Shelby game meant hanging a banner. After Shelby, the state championship game — even against Farmville Central’s pair of East-West All-Stars — was a sure thing.

Missing from that powerful mix of champions are super shooter Rachel McCullough, bouncy forward Jamecia Huntley and physical post Jaleiah Gibson. McCullough, a 1,000-point scorer, and Gibson graduated. Huntley will be playing her senior year for West Rowan, and she’s talented enough that she elevates an already stout squad to state contender status in 3A.

Seniors Kyla Bryant and Mary Morgan are back to lead the Hornets. They have started since they were freshmen.

Bryant, Brice’s daughter, is a 5-foot-8 combo guard whose best assets are her head and heart. She makes prudent decisions, defends hard, handles and passes smoothly and scores efficiently.

She can drill 3-pointers, knock down mid-range jumpers or finish at the rim. She makes her free throws. She’ll go down as one of the best in school and county history. She’s already scored 1,150 points and is 11th on the Hornets’ all-time list. If she has another 500-point season, she could finish as high as No. 2 for a program that has produced many exciting players. She averaged 17.2 points last season, and that could increase, as she may need to play more minutes this season.

“Kyla works hard at her craft all the time because she really wants to win and she’s continued to add to her game,” Brice said. “She’s in really good shape. She’ll play some point guard, but she’ll also play off the ball some for us. She can shoot it deep.”

Morgan isn’t a scorer (3.1 points per game), but she rebounds, defends several positions and is one of the all-time charge-takers.

Brice said Morgan took more charges than ever in the recently concluded fall league. That’s just something she does. It’s her thing.

Brice expects her to score more this season, and while that’s not her forte, she might.

“If teams sag off her, Mary can make shots,” Brice said. “She’s worked hard on being able to do that.”

The other three starters figure to come from one of the strongest bench groups ever.  MaKayla Noble, Icesis Nwafor  and Haley Dalton have paid their dues as part-timers, They’ve all had their moments. They’re ready to shine in starting roles.

They’ve been at it almost since last season ended. They played AAU ball in the summer. They won the championship of a competitive league in the fall.

Noble is a 5-foot-11 wing who can do everything. She shocked people this summer and is getting some offers.  She’ll probably at least double her 2021-22 scoring average of 6.8 points per game. She’s capable of making a jump from reserve to first team all-county.

Nwafor is a small forward who averaged 4.3 points per game, but she might average double figures with an expanded role.

“She’s really been shooting the ball lights out and we’ll need more points from her,” Brice said. “She was really good in the fall league.”

Dalton (4.1 points per game) can be a game-changer on the defensive end. She’s a long 6-footer and is a legitimate shot-blocker and shot-changer, which you don’t see much in girls games.

Injuries cost Dalton most of her sophomore season and some games her junior year, but she can be be a major factor with decent health. The Hornets have enough shooters, so Dalton won’t be asked to score big.  But could get 10 points per game just by finishing on layups and offensive boards and making free throws.

Junior guard Shamya Arnold is another returner. She’s got experience, as she played quite a bit for the varsity last season. She scored 42 points and could be the first girl off the bench this season. Brice hopes Arnold can handle the ball when she enters the game, freeing Bryant to look to score more.

New to the team are sophomores Mariana Zapata and Tristian Myers. They are good shooters. Sophomore Torese Evans adds quickness and defense is another potential point guard.

There’s a new five-quarter rule (a player can play four quarters for the jayvees and one for the varsity on a given night), so some of the young players can play in the jayvee games and still be available to get some varsity experience.

Salisbury is undertaking a challenging schedule that will start with Greensboro Day on Friday,

In December, the Hornets will take on (Greensboro) Ben L. Smith and  they’ll play in the John Wall Invitational in Raleigh after Christmas, rather than in the Sam Moir Christmas Classic.

The only “county” games for the Hornets this season will be against CCC rival North Rowan.

The Hornets will wield sufficient firepower to beat most teams, but Brice says it will be defense that determines if the Hornets can stay on top when the playoffs come around.

“We know we can shoot,” Brice said. “But it was strong defense that won that state championship. That’s still the key for us.”