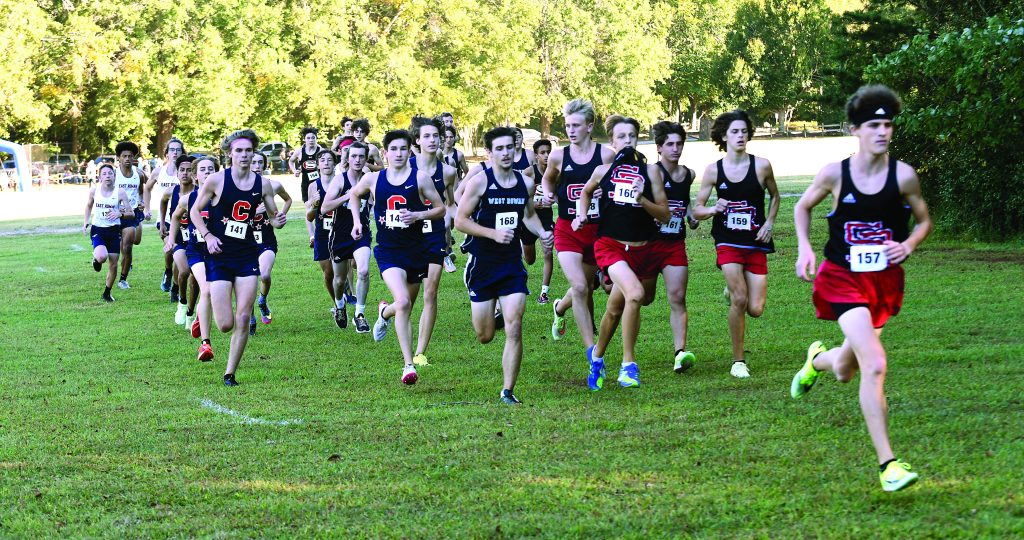 Eli Julian (157) leads the cross country pack at the county meet. File photo by Wayne Hinshaw for the Salisbury Post

CHINA GROVE — South Rowan junior Eli Julian was sick for a month during the cross country season, but he still finished third in the 3A State Championships.

“Terrible fever for a while, felt like I had the flu for a couple of weeks,” Julian said. “Fortunately, I was back close to 100 percent for the state meet.”

Julian is one of the best distance runners to come along in the county. That’s great. What’s greater is that he is still getting better.

“Good as he is, Eli is still making solid gains,” South coach Tyler Downs said. “He can hang with the elite guys in the state, including the big 4A guys.  He eats, drinks and sleeps running.”

Julian trains with an elite program in Mooresville once a week, usually on Saturrdays, where a professional trainer can pace him. That extra effort to keep improving is in addition to his regular work with Downs and South’s team, but there’s no danger of burnout.

“I love running now more than ever,” Julian said. “Still love to set the pace. Still love to get the wins. Still to love to lay down the good times.”

Julian is once again the Post’s Runner of the Year for boys cross country. He also repeated as Rowan County champion, South Piedmont Conference champion and 3A West Regional champion.

Julian broke 16 minutes for the first time this season in a brisk meet in Cary, but he normally runs low 16s. He was clocked at 16:13.79 in the state meet at Ivey Redmon Park in Kernersville.

” There was some rain early on, and then when we our guys ran in the afternoon it was humid, muggy, 76 degrees, uncomfortably hot,” Downs said. “But Eli ran a great race, ran a great time. He was right there in that front pack for the first 2.5 miles or so, but the kid from Orange (Gabriel Schmid) made his move and opened up a lead. Down the stretch, Eli wasn’t going to catch the first two guys, but he also wasn’t going to let anyone pass him. He was right there. Third in the state, a podium finish, that’s just huge for him and for our program.”

While cross country is mostly about individuals, like wrestling, golf and tennis, competition is tied to a team framework. Julian is the spearhead for a very good young team that continues to fill the school trophy case with plaques.

South won its fifth straight county championship, finished runner-up to Lake Norman Charter in the South Piedmont Conference and finished second to Atkins in the 3A Midwest Regional.

The Raiders placed seventh in the 3A State Championships.

“State comes down to one day, how good are you on that particular day, and we ran very well,” Downs said. “Not many PRS for our guys, but in a big meet like that, you’re fighting for places, not times. For all the ups and downs we experienced this season, to place seventh in the state is strong. I was pleased with that. Can we do better? Can we improve on seventh? Yes, we can. Most of our guys will be seniors next season, so that’s got to be our year.”

Julian has more races lined up in the days ahead. He likes the big meets, like to run against the best.

“In most meets, it’s almost boring for him because Eli knows he’s going to win by a minute or maybe a minute and a half, and it’s difficult to run a great time when you’re running by yourself,” Downs said. “That’s why he likes the challenge of those bigger meets. When he runs against great competition, he has a lot better chance to run a great time.”

Julian is as good off the course, as he is on it.

Julian is also fast on a track and was the Post’s Male Track and Field Athlete of the Year last spring.

He goes back and forth on whether he prefers cross country or track.

“When I have a great day in track it seems like the greatest sport there is, but I feel the same way after I have a big day in cross country,” Julian said. “It’s close between the two. The one thing I really like about track is the distances are standard and you can always compare times. In cross country, you can’t really compare times. Every course is different.”

Don’t bet against him. He’s elite, but he’s still finding ways to get better.

The All-Rowan County team is determined by the top 12 finishers in the Rowan County Championships.