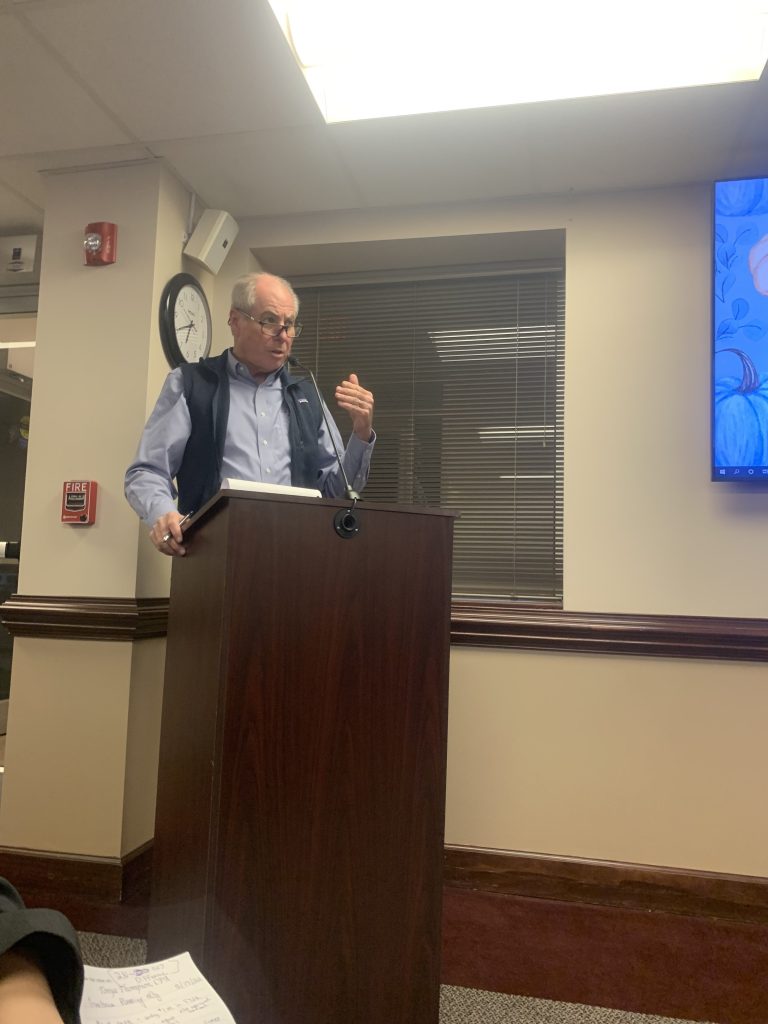 Landis Planning, Zoning and Subdivision Administrator Richard Flowe addresses the town's board of alderman during a Monday meeting.

LANDIS — A new industrial development in Landis took one step closer to fruition on Monday night during the town’s regularly scheduled board of aldermen meeting.

The property consists of approximately 20 unincorporated acres on Old Beatty Ford Road just east of Dial Street. Plans for the property feature an industrial facility, although no tenant has been determined. The property is adjacent to an area designated in the Town of Landis Comprehensive Land Use Plan — Future Land Use Map for “Employment/Manufacturing.”

According to Landis Planning, Zoning & Subdivision Administrator Richard Flowe, the developer is no stranger to the town.

“(The property under consideration) abuts a large industrial 115-acre tract that is under contract by the applicant, too,” Flowe said. “The property subject of the annexation and initial zoning is to be an extension of the industrial properties.”

The property owners submitted a petition for annexation in September. Since then, it has been presented to the Landis Planning Board, receiving a positive recommendation.

“I think it is a good decision to help bring more jobs and tax revenue to Landis,” said Ryan Nelms, Landis Planning Board chairman. “The developer is doing their due diligence to ensure it is a happy medium.”

The provision of services remains pending based on final approval from the city because it is currently outside city limits.

“We have not reviewed any detailed site plans or resolved all the necessary details for exactly what or how utility services and things of that nature will work,” Flowe said. “That will be pending your action. We cannot do site-plan approvals because the property is outside town limits at this time.”

Ryan Beadle is the Carolinas development director for Jackson-Shaw, a Texas-based design firm requesting the annexation, and he indicated that proximity to a major thoroughfare makes the space an attractive area for a facility of that type. “The site has great connectivity to Interstate 85 and the interchange at Old Beatty Ford Road,” Beadle said. “We feel the zoning would be consistent with what is around it.”

Beadle indicated that there are yet to be renderings of the project but did present several similar projects that his company had completed as possibilities.

Flowe added that those renderings, while not the confirmed construction types built in Landis, would all fit the Landis Development Ordinance in terms of aesthetic design and material standards.

While a possible tenant is unknown, Beadle explained that the site would house three structures, two of which would be rear-loading buildings. The final building would be capable of loading down two sides.

Beadle added that the capacities of each building would permit multiple tenants to occupy the same building.

Nearby resident Barbara Watkins expressed concern about such a large operation opening near her home.

“It looks really big,” Watkins said. “We bought property a year ago and started building. All of this will affect our property. This will directly impact us. I don’t know to what degree, but if you are right beside us, and this looks massive, my mind thinks of the in-and-out and how much that is going to happen during that time.”

To assuage Watkins’ concerns, Flowe pointed out buffering and screening required by the city within industrial designations. “Landscape buffers would be provided through the industrial zoning,” Flowe said. “Whatever the project is would have to satisfy those requirements, which are pretty extensive. It’s the largest buffer requirement that we have.”

Additional concerns were raised about the impact that the development would have on traffic and the general condition of Old Beatty Ford Road.

“I have some traffic data,” Beadle said. “We have hired consultants for a traffic impact analysis. They’ve done site-trip generations counting the cars along Beatty Ford Road to I-85 along the China Grove Road intersection and Bostian Road.”

Beadle did point out that it is an imperfect science because the type of tenant is unknown at this time. A logistics tenant or a manufacturing tenant would impact traffic volumes differently.

Since it is a state road and not a town of Landis road, the town manager, Diane Seaford, remarked that improvements would not be conducted on a municipal level.

Flowe added, “On all (N.C. Department of Transportation) maintained roads, there is a traffic impact study conducted, and that is required to be implemented for any new development that would impact traffic.”

There would be two entrances on Old Beatty Ford Road from the site.

“They would be a little over 800 feet apart,” Beadle said. “I can’t tell you with any certainty until (DOT has reviewed traffic impacts), but due to the size and scope of the project, it is highly likely there will be some improvements of the road in front of those entrances.”

Ultimately, the board voted to approve the annexation of the property and to zone it for industrial usage.