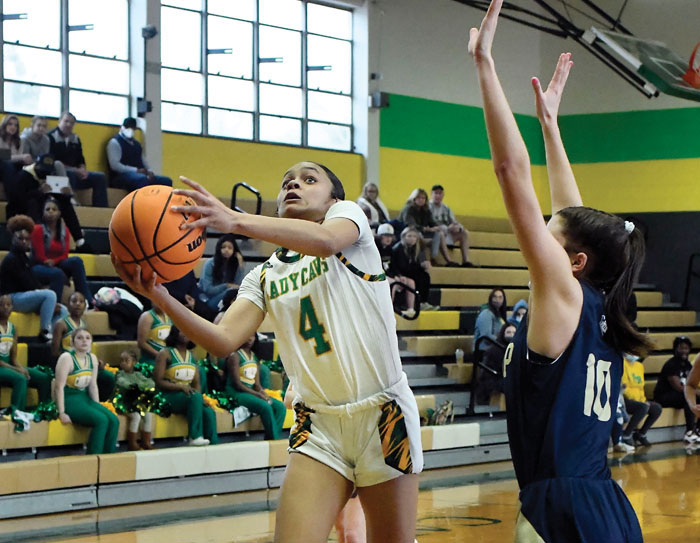 Playoffs: Lost 3rd round to Bishop McGuinness (1A state champs)

Fourth in a series of previews on local basketball teams.

SPENCER — The first thing you’ll notice about the North Rowan girls basketball team is that there are 12 of them.

A full layup line. A full roster. A full bench.

The Cavaliers started last season with eight in uniform, but they only had seven by Christmas.

It was a good seven. They won 20 games. They won two playoff games.

They brought it just about every night, didn’t lose a single game that they should have won. They lost three to Carson, three to Salisbury and one each to West Rowan, North Meck and 1A state champion Bishop McGuinness.

Anthia Smith, head coach of the Cavaliers for two strong seasons, is no longer at the helm. The new head coach is Darra Walker, a 26-year-old Pennsylvania native who was raining 3-pointers for the Livingstone College Blue Bears not too long ago.

Walker is not a school teacher. She’s a trainer at a cutting-edge facility in Charlotte where her forte is enhancing the individual basketball skills of college-level players.

She’s excited about what she’s got to work with. North should be good again.

With greater depth, North will be able to play faster than last season, and the plan is to turn up the heat several notches.

The key loss from last season’s team is Hannah Wilkerson, who put up 1,589 points in a stellar four-year career. Wilkerson averaged 17.2 points as a senior and basically stuffed the stat sheet across the board. She was a dynamic, focused player, and it was her team.

“Bailee is our floor general and she’ll be running the point, so there will be a lot on her shoulders,” Walker said. “But leadership is right in her element and comes naturally to her. She’s our most skilled player. She’s our best decision-maker. She can create for herself or her teammates. I trust her 1000 percent and her teammates trust her.”

Goodlett averaged 10.8 points as a freshman.

Goodlett is small, but she has elite quickness. That allows her to score in bunches off steals or in transition.

In the half-court, everyone plays her to drive, but she can shoot. She’ll make 3-pointers when defenders back off. She handles the ball well, defends well and passes well and should be one of the county’s best.

“Playing fast, we’re going to be able to take full advantage of her abilities,” Walker said. “She’s got the green light.”

Brittany Ellis is another junior who has been a two-year starter. She averaged 11.7 points last season and like Goodlett, she was all-county and all-conference.

She’ll be another “green light” player.

A state champion thrower in track and field, Ellis is strong and explosive. She’s a streaky shooter who topped 20 points four times last season, with a high of 23.

“She has the strength to attack the basket and she can really shoot the ball,” Walker said. “I love her tools and I love her game. She’s going to be a tough matchup. We can move her to any position, depending on the opponent.”

Junior Bloom Goodlett is Bailee’s twin, but she’s bigger and is a different kind of player.

“Bloom is definitely is an amazing rebounder and defensive player, but she’s also got more offensive skills than people realize,” Walker said. “It’s all about building up her confidence because if she plays confidently and finishes strong around the rim, she can really catch people off guard. Once her confidence sky-rockets, I think she can average double digits.”

Goodlett averaged 3,4 points last year, so that would be quite a jump, but someone has to replace Wilkerson’s production. She’s one of the candidates.

Senior Chloee Stoner is the fourth returning starter. She averaged 4.0 points a game, but she has a nice shot and is a good athlete, so she’s capable of more.

“She’s a team-glue person with high energy,” Walker said. “She shoots it well and we want to get her into attack mode all the time. She’s our most experienced player, and we’re counting on her.”

Sophomores Krisstyle Stockton and Dasia Elder were the bench last year. Both always got some minutes, so they’ve got experience. Elder contributed 60 points and some good defense last season, while Stockton helped out with 33 points. Both like to crash the boards.

“They’re working hard and they’re giving us a lot of energy,” said Walker, who will be assisted by Hall of Famer Ralph Ellis, Brittany Ellis’ grandfather. “They’re going to be in the mix as they gain experience, especially as the season moves into December and January.”

If there’s one word that sums up Walker’s approach, it’s energy.