College football: Walker era ends at Catawba, but he’ll always be an Indian 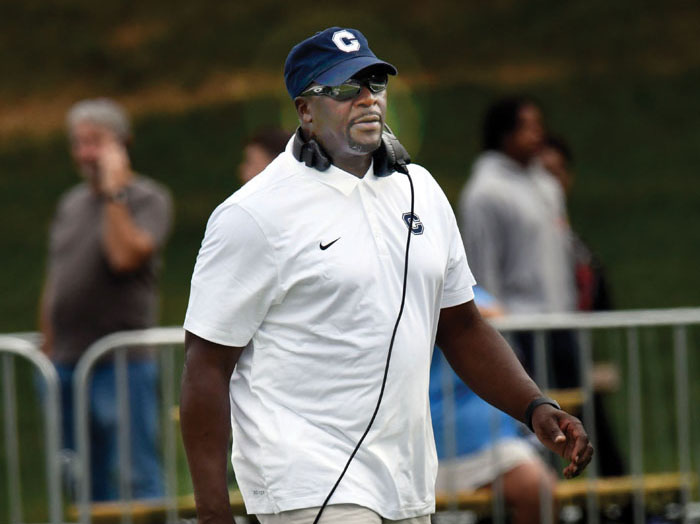 Catawba’s head coach Curtis Walker during a game against Tusculum during a game earlier this season. Walked has resigned as the head coach. Photo by Wayne Hinshaw, for the Salisbury Post

SALISBURY — Facebook swelled with messages of “thank you” and “you changed my life” and “God bless you” for Curtis Walker on Monday.

“I didn’t realize what an impact Catawba would have on my life when I arrived on campus in 1988,” Walker said. “I am forever grateful for the relationships built, friendships made and opportunities provided over the past 34 years. My love for the Catawba football program is why I returned to campus, and also why I feel now is the right time to leave.”

Walker had known for a few weeks that his final meeting with the team was coming, but he steadfastly plugged away, always a good soldier for the Catawba Indians, right down to the end.

“I came to work every day, coached as hard I could, did the best I could with what we had,” Walker said.

Walker’s ride as head football coach included some of the best of times and some of the worst for Catawba. Coaches are ultimately weighed and measured by the lives they positively affected, but the final bottom line as far as wins and losses was 46 up and 54 down in an even 100 games as the leader of the program.

Walker’s first two teams — both 6-5 squads — began a rebuilding effort. He brought a lot of energy to that task.

The 9-2 team that he guided to a SAC championship in 2017 was even better.

“That was the best team, no doubt, great job by a hard-working coaching staff and a lot of leadership by great young men like Trey Evans and Kyle Kitchens, who bit the bullet, bought in and led that team,” Walker said. “We lost to Wingate on a late field goal, and I promised our guys that if they won out we’d be in the playoffs. They did everything I asked. We won out, and I was so grateful for the effort that our players gave, but then we didn’t get in the playoffs. I remember being confident that we were in and then finding out that we weren’t. That was terribly disappointing.”

That was a turning point. The studs graduated. The momentum stopped. After that, it was 4-7 and 1-10, and then an 0-2 COVID-wrecked season.

The Indians showed signs of life with a 4-0 start in 2021 before COVID battered that season, as well.

This season the transfer-depleted and injury-plagued Indians collapsed to 1-10 with zero South Atlantic Conference wins and weren’t often competitive with SAC rivals.

“Never had two quarterbacks available in the same game this season,” Walker said. “COVID didn’t help us and injuries certainly didn’t help us, but I can walk away knowing I gave it my best through everything.”

Walker came to Catawba as a freshman from Burlington. He developed into one of the finest players in program history, a linebacker who made a school-record 25 tackles in a game with Wofford. Team MVP in 1991 and team captain in 1992, he would be enshrined in the Catawba Sports Hall of Fame and South Atlantic Conference Hall of Fame.

His coaching career began as a Catawba assistant and continued at Coastal Carolina on David Bennett’s staffs. He rose from linebackers coach to defensive coordinator.

After a year as defensive coordinator at Western Carolina after the Coastal staff was broken up, he got the nod from Catawba to come home to lead the Indians, as Chip Hester’s replacement, in December 2012.

He answered the call and went to work.

He was upbeat on Monday night, positive and genuinely excited about an immediate future that is going to include much more family time.

His older son, Jalon, is a linebacker at the University of Georgia, and the All-America high school player is getting playing time as a true freshman on the nation’s top-ranked team.

Walker’s younger son, Curtis Jr., who is known as Deuce, doesn’t have Jalon’s size, but he’s an exceptional athlete who is drawing lots of college interest as a 5-foot-10, 175-pound high school junior at Salisbury. He is a two-way player for the Hornets as a defensive back and receiver. Duke offered him recently, joining Charlotte and Campbell.

Coach Walker has a unique and wonderful experience coming up on Saturday. Deuce has been invited by the University of Kentucky for a game-day visit, and the Wildcats happen to be playing the Georgia Bulldogs, so Coach Walker can watch one son play, while his other son is being recruited by the opposition. Maybe they’ll play against each other in the SEC one day.

“Jalon didn’t get to make these recruiting trips because he was coming along during COVID, but Deuce has this great opportunity,” Coach Walker said. “It’s also an opportunity for me to go with him and help him along in the recruiting process. I’ve tried to help a lot of young men for decades, and now I’ve got the chance to help my own son.”

“Catawba gave me my first opportunity to be a head coach, gave me the opportunity to be the first Black head football coach in the SAC,” Walker said. “Those are things I will never forget and will always appreciate.”

“We are grateful to Coach Walker for his many contributions and to our football program,” Caddigan said. “I am excited for him to have the opportunity to spend more time with his family and watch his sons compete in football at a very high level. We wish him nothing but the best. He will always be a Catawba College Indian.”