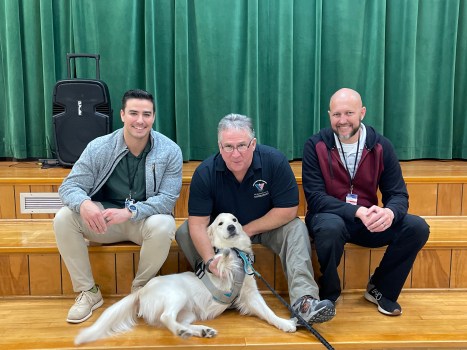 Cody Reimers, left, Steve Doerr, and Justin Ruechel take a picture with GiGi the service dog that will soon be equipped with a prosthetic limb. 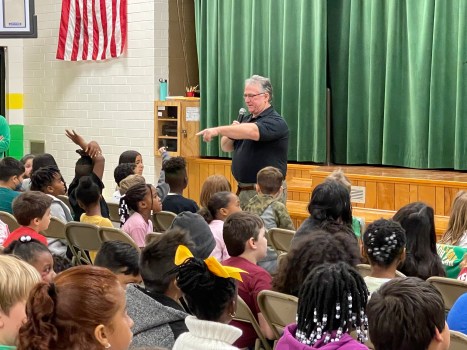 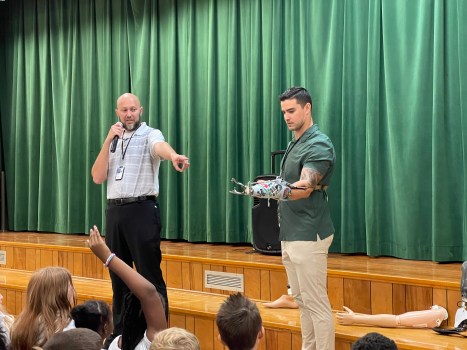 Justin Reuchel, left, and Cody Reimers demonstrate to the students at North Rowan Elementary School how a human would use a prosthetic device.

SPENCER — Learning about prosthetic limbs can be difficult for young children, but North Rowan Elementary School staff found a way to make it engaging and informative.

The English cream golden retriever was injured at birth after she was born with a cut on her paw.

“The veterinarian gave the breeder some ointment to put on it when she was born,” McKay said. “When she was three days old, the breeder put it on, and the mama dog didn’t like it and literally nibbled off half of her leg overnight. Before the breeders checked on her in the morning, it was already done.”

Given McKay’s background working with animals, she brought GiGi home at a younger age than many dogs selected for training.
“I got Gigi when she was 6 weeks old because I have a lot of experience training animals because I’ve worked in zoos and things like that previously,” McKay said. “One of my first assignments with her was to do 30 new people and 30 new situations in 30 days and then repeat that.”

McKay indicated that GiGi has been an excellent service dog but that her condition from birth will be exacerbated as she ages, making the prosthetic appendage necessary for her quality of life.

“(GiGi) has to twist her shoulders significantly to put that leg down,” McKay said. “The prosthetic will make it so she will be able to walk evenly and won’t have spinal problems later on. With her being my service dog, hopefully, she’ll live a nice long life, and I won’t have to go through losing her and then having to train another dog.”

GiGi’s condition has allowed the students to engage in emotional-learning exercises.

“She’s there for me, but it has been a nice thing for the students,” McKay said. “I’m a social-emotional learning teacher. And so I’ve used GiGi as an example of uniqueness and helping the students with compassion and empathy.”

The lessons go much further than that, though.

GiGi received her first exam at Hanger Clinic in Greensboro, which has provided students with observations and measurements needed to begin their design process for the prosthetic.

When GiGi is equipped with her professionally designed prosthetic device, McKay will acclimate her to it instead of affixing it 24/7 from the get-go.

“During that time, we’re gonna let the kids do a few design iterations and sort of see what he can come up with,” said Benjamin Butchart, North Rowan Elementary’s Apple Learning Coach. “Then we can show them the actual one that an expert came up with, and it sort of helps them see that design process and learn about the field of prosthetics along the way.”

According to Butchart, the interactive nature of the project has helped remove the barrier many children have when faced with the appearance of prosthetics.

“We’re just working with third, fourth, and fifth graders to let them go through a few design iterations of what a prosthetic would look like for GiGi,” Butchart said. “We’ve got their engagement. So we know it’s going to be a fun lesson for them.

Butchart indicated that the students’ questions during the presentation involved “everything under the sun.”

“They had tons of questions,” Butchart said. “They wanted to know if it hurt and what the prosthetic was made out of. Can it get wet? What happens if it breaks?”

More importantly, McKay pointed out how it helped the students see the human side of prosthetics.

“The students were really interested in how people can use (prosthetics),” McKay said. “And one of the guys from the V.A. said if you see somebody with a prosthetic (visibly out), they’re OK for you to ask questions. As parents, we, a lot of times, shun kids away from staring or asking questions, but if somebody actually has it visible, they’re welcoming that type of interaction.”