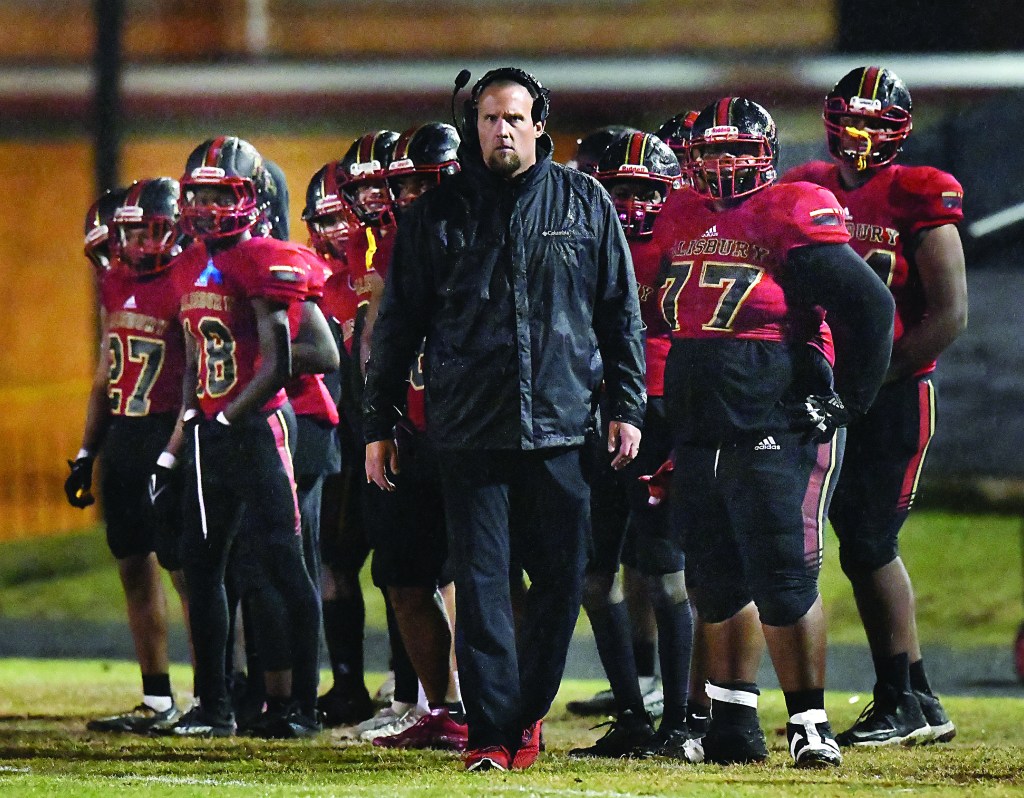 It wasn’t perfect, but it was encouraging. The Hornets played a whole lot better in Round 2 of the 2A West playoffs than they did in Round 1.

“That first-round game with Brevard wasn’t pretty and our kids knew we didn’t play well,” Salisbury head coach Clayton Trivett said. “But we came back with a great week of practice and it showed in how we played. We got some things corrected. We had some turnovers late, but we took care of the ball for the most part on a wet night.”

Salisbury senior running back JyMikaah Wells was at barreling over tacklers again. Five more touchdowns and 172 rushing yards on 25 workhorse carries in a 48-13 pounding of Pine Lake Prep. His TD runs were short, but he had some long ones to set them up.

Wells has 1,918 rushing yards this season and 5,360 for his career. He’s third on the all-time county list.

He’s shattered Salisbury career marks for rushing yards and for touchdowns scored. He has 83.

Wells added some school single-season records to his ledger on Thursday. His 1,918 rushing yards topped the 1,780 by Romar Morris in 2010. His fifth TD against Pine Lake Prep was his 34th of the season to break that school record. Justin Ruffin scored 33 TDs in 2012.

“We’ve got a  young offensive line,” Trivett said. “We realized at the middle of the season that with those inexperienced guys on the line we had a better chance of being successful running the ball than throwing it. We made a decision to give JyMikaah the ball a lot more. (Quarterback) Mike Geter is a really good player and continues to do good things every week for us, and JyMikaah has thrived with a heavy workload. He’s doing a great job.”

Right guard George Ellis has missed the playoff games with an injury, but Bo Brincefield, a sophomore who moved up from the jayvees, has kept things rolling.

Seeded 11th in the 2A West bracket, Pine Lake Prep came in with the same record as the sixth-seeded Hornets, but had little chance to stop Wells or Salisbury quarterback Mike Geter and had no chance at all to move the ball against Salisbury’s defensive front.

PLP had thrown for 412 yards in its first-round playoff win against West Stokes, but the air lanes were shut down in the first half. Salisbury two-way standouts Geter and Deuce Walker made interceptions.

“What we saw on film was a running team that threw the ball a lot more than usual last week,” Trivett said. “We went in to it with the defensive priority of stopping the run — and guys did a good job of it.”

Salisbury had some key defenders out with linebacker Anthony Dodd hurt and linebacker Amare Johnson ill, but Makaii Blackwell had a big game, and Saderian Robinson, a 330-pounder, proved hard to move. Young linebackers Jaylin Graham-Taylor and Emmanuel Asare had stout games.

Wells’ first touchdown came early in the second quarter, as he finished a 72-yard drive with a score from the 4-yard line.

When PLP fumbled the ensuing kickoff, Salisbury wound up with the ball at the PLP 15. Wells got the touchdown that made it 21-0, and the Hornets had scored twice in the span of a minute.

Geter’s interception led to Wells’ third TD with 1:42 left in the half. The Hornets  took a 27-0 lead to the locker room.

Geter broke a 65-yard scoring run in the early stages of the second half. After a fumble recovery and another short TD burst by Wells, it was 39-0.  Geter ran for a 2-point conversion and a 41-0 lead.

Joseph White caught two scoring passes, one on a flea flicker from running back Noah Murphy and one from quarterback Nick Reid to make it a 41-13 game.

“Our pass defense was very good, but they tricked us on the double pass for their first touchdown, and White went up and made a great catch on a 50/50 ball when we were in good position for the other one. He’s a really good player.

Wells  got the final score of the game in the opening minute of the fourth quarter. Wells had scoring runs of 4,6, 1, 4 and 2 yards.

Next for Salisbury will be a trip to Burns. Third-seeded Burns destroyed Shelby 42-0, so it will be a big challenge for the Hornets next week.

“We started looking at Burns on Friday, and they’re very good,” Trivett said. “When you beat Shelby twice in the same season, you have to be a really good team, but the whole 2A West bracket is nothing but really good teams. There’s like four losses combined for the teams left in the bracket.”