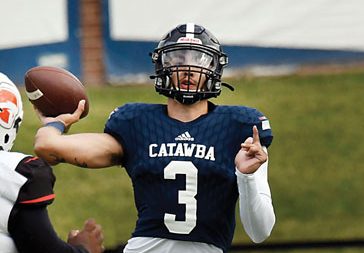 Catawba's QB Ridge Jacobs passed for 222 yards and tossed a first-quarter TD. photo by Wayne Hinshaw, for the Salisbury Post

SALISBURY — There wasn’t a whole lot of good in Catawba’s goodbye Saturday afternoon.

In a game marred by 25 penalties and some genuine nastiness, the Indians put their season to bed with yet another disappointing performance — falling 61-23 to SAC rival Carson-Newman before a clamorous crowd at Shuford Stadium.

“Right from the start, we tried to be locked in and focused,” defensive lineman Ke’Vaughn Hobbs said after last-place Catawba (1-10, 0-9) suffered its 10th consecutive loss. “We wanted to end the season with momentum. The defense never gave up, but we certainly could have played harder.”

That drew an immediate response from teammate Izaiah Taylor, a sophomore free safety leaning against a nearby wall in the Catawba fieldhouse. “That’s what needs to be in the paper,” he suggested. “In big, bold letters — we could have played harder.”

Instead, the Indians coughed up an early two-touchdown lead, lost their cool for much of the decisive third quarter and squandered a chance to move forward with a positive vibe. Carson-Newman (6-5, 5-4) piled up 526 yards total offense, passed for five touchdowns, rushed for three others and got an 86-yard punt return for a score from sophomore Major Williams that put the game out of reach late in the third period.

“All week long we talked about winning the game to propel us into next season,” said 10th-year Catawba coach Curtis Walker. “That was our plan. This isn’t going to change anything about what we do going into the off-season. We’re going to try to have a lot of momentum going in. And we’re going to build this thing using a lot of the positive plays from today.”

There were a number of bright spots for the locals. Redshirt freshman quarterback Ridge Jacobs passed for 222 yards and tossed a first-quarter TD to Marquece Williams that opened the scoring. Just 1:12 later — following a Dominic Burnam fumble recovery on the ensuing kickoff — Williams shouldered his way into the end zone for a 13-0 Catawba lead, adding a bit of light to the season’s shade.

“In the first 10 minutes we made a statement,” Jacobs said after completing 16 of 33 attempts. “We weren’t just giving up. We’re fighters and we were going to fight as hard as we could.”

They did — until the visiting Eagles fought back with a vengeance. C-N counter-punched by driving for touchdowns on each of its next three possessions and built a 21-16 halftime advantage.

“We knew at halftime it was going to come down to finishing what we came to do,” C-N wideout Braxton Westfield said after snaring five passes — three of them for touchdowns – and 162 yards. “We wanted to go plus-one in the win column. But that first half, that wasn’t Carson-Newman football.”

The second half had all the markings of an old ABA game without the red, white & blue ball. Not much defense was played as the Eagles made four end-zone appearances in the third quarter, the last when Westfield snatched a 37-yard touchdown pass from senior quarterback Ivan Corbin (9-for-13, 236 yards, 4 TDs) for a 48-23 lead. C-N was aided and abetted by four unsportsmanlike conduct penalties against Catawba. An additional hands-to-the-face infraction cost the Indians 15 yards and paved a path for Westfield’s last TD.

“They may have lost their composure, their focus,” Westfield said afterward. “Sometimes you have too many tempers out here on the football field.”

Catawba finished the game quietly, punting once and failing on three fourth-down conversion tries in the final stanza. And while the post-game mood appeared solemn and frustrated, Walker continued to see the good side of bad.

“The positives for me right now,” he said with a confident smile, “is we have some youthful guys who got some valuable game experience. Was it to a point where we were going to be successful every Saturday? No, but I’m positive these young guys built on their skill set because they had an opportunity to get some reps. Win or lose, it all counts.”

NOTES: Catawba finished with 450 yards total offense, including 209 on the ground. Running back Daniel Parker had a game-best 148 yards and scored on an explosive 65-yard run in the third quarter. “Still, disappointing because we didn’t accomplish what we wanted to,” he said. … Hobbs led the defense with 10 tackles and a sack. East Rowan graduate Christian Bennett had seven stops. … Freshman Kujuan Prior remains Catawba’s most-dangerous ball handler. The wideout/quarterback made six receptions for 57 yards and completed a 19-yard pass to Williams in the opening period. One snap later Williams (3 TDs) scored from the 1-yard line. … Catawba was 3-for-16 on third-down conversions and 1 for 4 on fourth-down attempts. … The referees earned their paychecks. Catawba was penalized 12 times for 152 yards while C-N was flagged 13 times for 138.