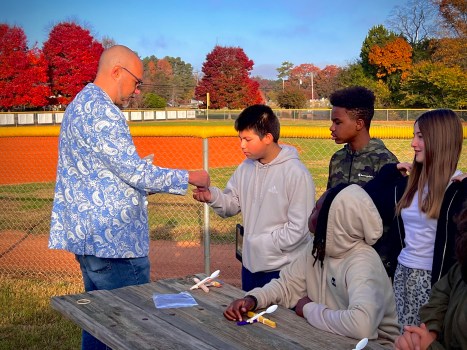 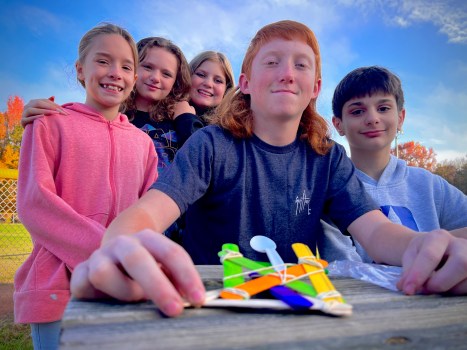 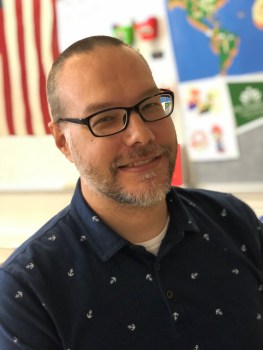 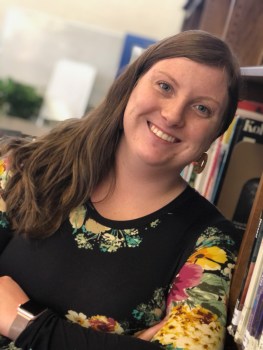 GRANITE QUARRY — Presented in PowerPoint format, concepts like proportions and kinetic energy might seem distant, but two Erwin Middle School teachers took their classes outside and let those lessons fly.

Students from Madison Livengood’s science classes and Justin Owens’ math classes used terms and topics they were learning about in class to create marshmallow catapults and then competed against other seventh graders. The activity combined team-building with the subjects from class in a way that both teachers said helped engage the students in proactive ways.

For the science element, the project provided a real-life display of energy in various forms.

“We were talking about different types of energy,” Livengood said. “They had to figure out if it had potential or kinetic energy at different stages in the catapult.”

Livengood indicated that potential energy was represented as the catapult was being prepared to fire.

“Potential energy is not moving,” Livengood said. “When they had it pulled back it had the potential to move, but it wasn’t moving yet.”

What happened next constituted kinetic energy.

The catapults were crafted out of rubber bands, popsicle sticks and spoons. Leading up to the event, the seventh graders completed multi-step proportional problem-solving and earned points that they could spend on the resources to build their catapults, but proportions were hardly the only mathematical concepts the students explored.

“To get to the point of being able to build the catapult, they had to answer questions about proportional relationships, while also working with percents and scale drawings,” Owens said.

The catapult exercise didn’t stop there.

“We pushed ahead to what we are doing this week which involved the types of angles that we were dealing with,” Owens said. “Those angles included where the catapult projected at, and where it was resting at.”

Providing hands-on experience is important for Owens who struggled to apply mathematics during his days in middle school.

“When I was at this age, I actually repeated the seventh grade,” Owens said. “It was all because of math. I absolutely hated math. It was boring … so, one of the reasons that I got into this is because I wanted to change that perception about math.”

Changing that perception requires thinking outside the box, and sometimes outside of the classroom, but Owens indicated that if that mission is successful, then it can have far-reaching effects.

“If we can change kids’ and parents’ perceptions about what it is like to do math, then it won’t feel so scary and overwhelming to tackle,” Owens said. “There are a lot of things we teach that kids may not use daily, but there are a lot they will. So for me it’s all about changing that perception.”

It goes beyond perception for Livengood, who indicated that hands-on application is the ideal method for scientific instruction.

“A lot of science you learn by doing,” Livengood said. “I can sit here all day long and go through PowerPoint after PowerPoint on what potential and kinetic energy is, but when they actually practice it and see it, it helps them understand it more.”

As for the students, they seemed to enjoy it.

“(The catapult exercise) helped us practice teamwork and helped us earn trust in our teammates,” she said.

Fellow seventh grade student  Kayleigh VanDeVelde took fun in the way that they garnered resources to build their catapult.

“We had to solve math problems to earn Owens Bucks that we used to buy materials to make our catapults,” VanDeVelde said. “We had to make sure our problems were correct, so we had to really take our time to solve them.”

The catapult exercise is just one of the ways that the teachers are working together to show the interdisciplinary nature of many math and science elements.

“After Christmas, we will do an Olympics-type event where we go to the track at East Rowan (High) and they have to calculate speeds,” Livengood said. “We usually partner up to do that together because math is in the calculations and speed is a science standard for seventh graders.”