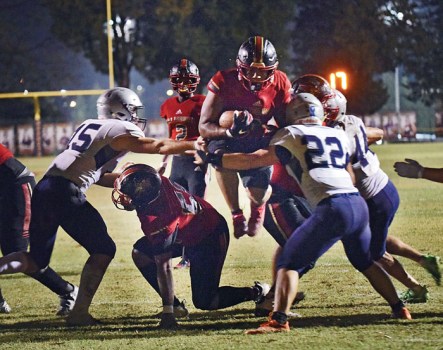 Salisbury’s Jymikaah Wells (6) jumps over his lineman to score a TD. photo by Wayne Hinshaw; for the Salisbury Post 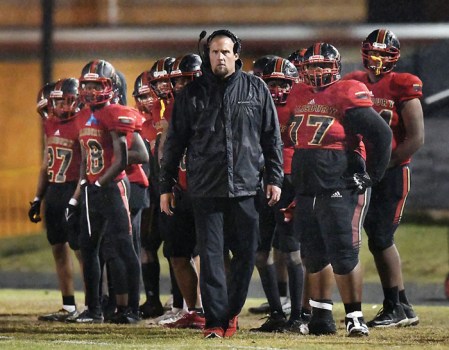 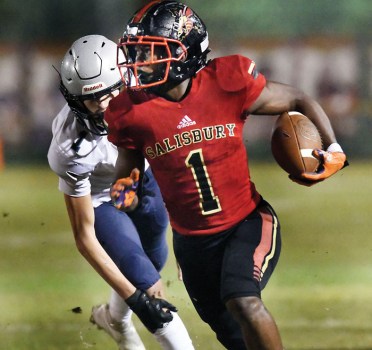 SALISBURY – It was chilly, wet and generally miserable on Thursday night at Ludwig Stadium, but the bottom line is that the Salisbury Hornets advanced.

JyMikkah Wells racked up five more touchdowns and the Hornets weren’t seriously challenged by the Pine Lake Prep Pride in the second round of the 2A state playoffs and won 48-13.

Seeded 11th in the 2A West bracket, Pine Lake Prep came in 10-1, the same as the sixth-seeded Hornets, but had little chance to stop Wells or Salisbury quarterback Mike Geter and had no chance at all to move the ball against Salisbury’s defensive front.

PLP had thrown for 412 yards in its first-round playoff win against West Stokes, but the air lanes were shut down in the first half. Salisbury two-way standouts Geter and Deuce Walker made interceptions.

Wells’ first touchdown came early in the second quarter, as he finished a 72-yard drive with a score from the 4-yard line.

When PLP fumbled the ensuing kickoff, Salisbury wound up with the ball at the PLP 15. Wells got the touchdown that made it 21-0, and the Hornets had scored twice in the span of a minute.

Geter’s interception led to Wells’ third TD with 1:42 left in the half. The Hornets didn’t execute on the PAT but took a 27-0 lead to the locker room.

Geter broke a 65-yard scoring run in the early stages of the second half. After a fumble recovery and another short TD burst by Wells, it was 39-0. With the Hornets having some issues on PATs, Geter ran for a 2-point conversion and a 41-0 lead.

There was still a lot of time left in the third quarter, but Geter and Wells took a seat for a while.

PLP didn’t quit and picked off two passes from Salisbury’s backup QB Hank Webb. Joseph White caught two scoring passes, one on a flea flicker from running back Noah Murphy and one from quarterback Nick Reid to make it a 41-13 game.

That prompted Salisbury coach Clayton Trivett to send Geter and Wells back in, and the Hornets got the final score of the game in the opening minute of the fourth quarter.

Geter ran for 119 yards. Walker had three catches for 35 yards.

White had five catches for 150 yards for the visitors.

Next for Salisbury will be a trip to Burns. Third-seeded Burns destroyed Shelby 42-0, so it will be a big challenge for the Hornets next week.

MOUNT AIRY — North Rowan ended the season with a 57-7 loss at Mount Airy.

The fourth-seeded Granite Bears (11-1) couldn’t be stopped on the ground, and they led 43-0 before the 13th-seeded Cavaliers (7-5) got on the scoreboard.

North scored late in the second quarter when Jeremiah Alford threw a touchdown pass to Amari McArthur, who caught the 32nd TD pass of his career.

But that was it for North. Mount Airy scored before halftime for a 50-7 lead, triggering a running clock for the entire second half.