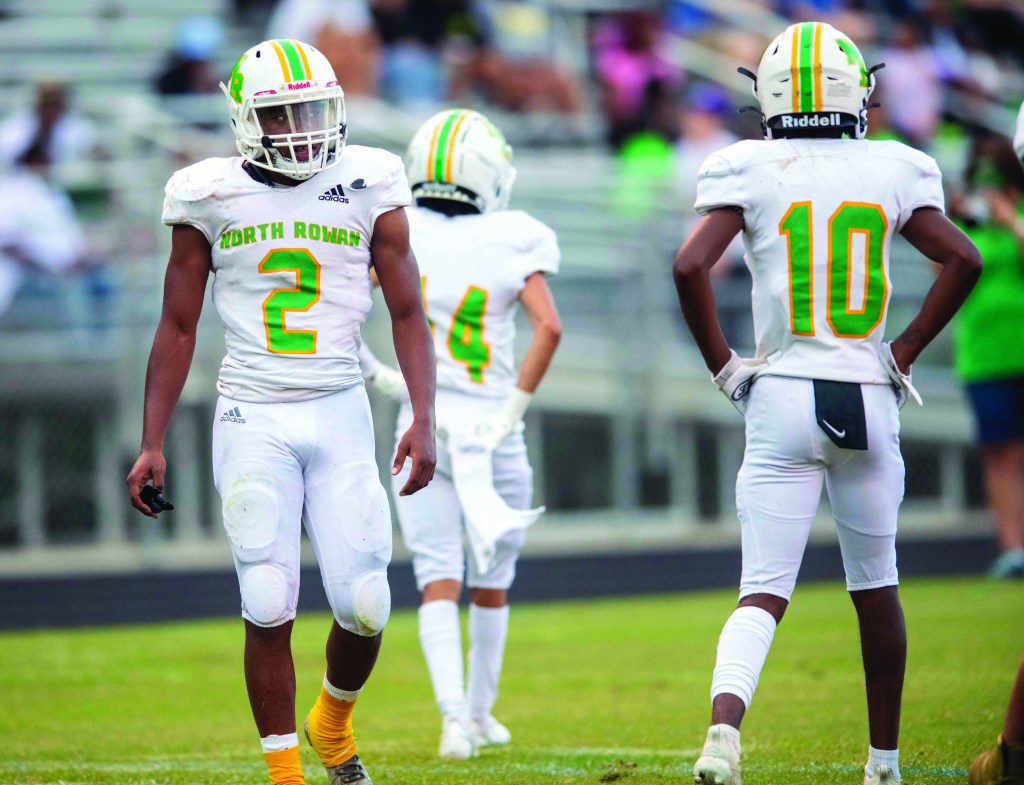 SALISBURY — It’s late in the game for a hurricane, but Nicole, a weird, lima-bean shaped storm, is expected to start dumping rain on North Carolina tonight.

Anticipating dismal conditions and a 99 percent chance of rain on Friday, most of the second-round football playoff games in the state have been moved up to tonight, including Pine Lake Prep at Salisbury and North Rowan at Mount Airy. Kickoffs are at 7:30 p.m.

West Rowan is playing in the mountains at West Henderson. That one is still set for Friday at 7:30 p.m.

Salisbury is expected to make Round 3. North Rowan is not. West Rowan is a 15 seed playing at a 2 seed, but respect for West Rowan statewide is significant. West Henderson is undefeated, but that game is seen as a 50/50 toss-up by the experts.

Andrew Poston asked an interesting set of questions this week and since he sponsors the J.T. Bost Sportsmanship Awards and was nice enough to cover the epic West Rowan at North Lincoln game for the Post in the 2021 playoffs, I went looking for the answers.

The answers are yes and yes.

That was South’s last playoff team. The Raiders won nine games that season.

That was the middle season of West’s 3A state championship three-peat. The Falcons were 16-0.

That was Brian Hinson’s final season as head coach at East. The Mustangs were very good.

Carson was 1-4 in county games in 2009, but still won a playoff game. The Cougars were building something special. They won 10 in 2010. That’s still the school record.

Salisbury was outstanding in 2009, with most of the phenoms on the roster who would win a state title in 2010.

North had future pro Javon Hargrave and went 5-2 in the 1A Yadkin Valley Conference to get in.

Rowan teams went 43-13 that season against opposition from outside the county. All six Rowan teams had winning records against outside opponents.

As far as no Rowan teams making the playoffs, the most recent time that occurred was in 1989.

No one in Rowan County had a winning record in 1989. West, South and Salisbury all went 5-5. East won three. North won one.

While I was going through the record books, I compiled all-time postseason records for each of the schools, just in case someone is interested.

Boyden or Salisbury teams have appeared in the postseason 33 times with a record of 48-24-1.

That includes Boyden’s first postseason appearance under coach Gordon Kirkland in 1931, the triumph in the 1947 Dairy Bowl, the loss in the 1949 Piedmont Bowl and the 1955 and 1957 state championships.

The postseason tie occurred in 1971. Salisbury and South Point battled to a 14-all deadlock in the Western North Carolina High School Activities championship game.

North has made 33 postseason appearances and takes an all-time record of 25-32 into tonight’s game. North has been in the NCHSAA playoffs the last 14 seasons.

South was in the playoffs every season from 1975-86 and has 19 postseason appearances. The Raiders are 8-17 in the postseason. Three of those wins came in the 1983 “Division II” playoffs.  The Raiders officially went 1-0 in the 2002 playoffs. If you’re wondering how that possibly could happen, South lost in the first round, but that loss eventually became a forfeit victory.

East has 16 postseason appearances. The Mustangs are 13-15 all-time in the postseason. Three of those wins came during the 1969 team’s undefeated march to the WNCHSAA title. East also had multiple playoff wins in 1991, 2012 and 2014. East’s most recent playoff appearance was in 2018.

Carson has made eight playoff appearances and is 2-8 all-time. The most recent playoff win for the Cougars was in 2010.

The 2A West bracket is unusually strong, which is why two 10-1 teams are meeting in Round 2. Fifteen of the 16 teams still alive in the bracket are 8-3 or better.

Pine Lake Prep had a reputation as a running team, but when West Stokes stacked the box against PLP in the first round, the Pride went to the air with great success. QB Nick Reid threw for a school record 412 yards, while completing 76 percent of his passes. PLP’s Gabe Bolivar added 17 carries for 141 rushing yards.

PLP plays a lot of people both ways, including Reid and Bolivar. Reid is the free safety on defense.

PLP’s loss was to Community School of Davidson in the final game of the regular season.

Salisbury has won 10 straight under coach Clayton Trivett since an opening-night setback against West Rowan.

Brevard made the first-round tough for Salisbury by keying on running back JyMikaah Wells and holding him to one touchdown. QB Mike Geter made enough plays for the Hornets to advance. They’re a well-rounded team with a good defense and good special teams.

There’s not much doubt Salisbury will be the best team Pine Lake Prep has faced. Salisbury is favored by 25 points by the Massey Ratings and has a 90 percent win probability.

Mount Airy is favored by 22 points. The Massey Ratings give North a 20 percent chance of an upset.

Mount Airy’s head coach is JK Adkins, who was one of Joe Pinyan’s top assistants during his run at Salisbury.

Mount Airy’s only loss was 14-12 back in August to undefeated 2A East Surry.  The only other team that gave the Granite Bears any sort of a game was Ashe County.

North head coach Nygel Pearson says Mount Airy looks more like a 1 seed than a 4 seed on film. Mount Airy hasn’t been scored on since September. The Granite Bears didn’t allow a first down last week and didn’t have a defensive penalty.  Mario Revels had a pick-six and a punt-return TD for Mount Airy in a 72-0 romp.

Mount Airy has won its last four games by a combined score of 255-0.

“There were some weaker teams in their conference that must have hurt their strength of schedule, but they look good,” Pearson said. “They’ll be as good as anyone that we’ve faced this year.  They’ll show our defense a lot of different looks — shotgun, split backs, two backs — and they run the ball extremely well. They also do a very good job of crowding the box on defense and stopping the run.”

Morrow has scored 27 touchdowns and has found the end zone on offense, defense and special teams, while racking up 1,356 rushing yards.

North hasn’t played Mount Airy in 40 years. The 1982 Cavaliers went 10-0 in the regular season and beat A.L. Brown in the first round of the 3A playoffs. North lost 14-7 to Mount Airy in the second round.

“The short week didn’t help us as far as getting some kids healthy, but we’ve got to roll with what we’ve got,” Pearson said. “We’ll be ready. We’ve got some big-play kids and we’ll see if we can out-run them some.”

Despite the seeds and an unblemished record, West Henderson is only a 1-point favorite in a battle of two blue teams nicknamed the Falcons.

West Rowan’s losses were to two teams that are 10-1.

West Rowan thumped West Henderson when the programs met in the 2015 state playoffs, but this is the best West Henderson team in quite a while. West Henderson won its first conference championship since 1996 by destroying a stout Tuscola team 55-7 to end the regular season.

The main man for West Henderson is receiver Truitt Manuel. He had 13 catches for 218 yards and five TDs against Tuscola. He’s the No. 1 receiver in western North Carolina, although he won’t be playing college football. He throws 95 miles per hour and is committed to N.C. State baseball.

QB Lukas Kachilo is the guy who gets the ball to Manuel. He had six TD passes against Tuscola.

West has a 2,000-yard QB in Lucas Graham and a 1,000-yard receiver in Adrian Stockton. Landon Jacobs anchors the ground game, and Kayvone Norman has been big lately.

West Henderson is considered unusually fast for a mountain team, but West Rowan has good team speed and is going to have a size advantage in the trenches.