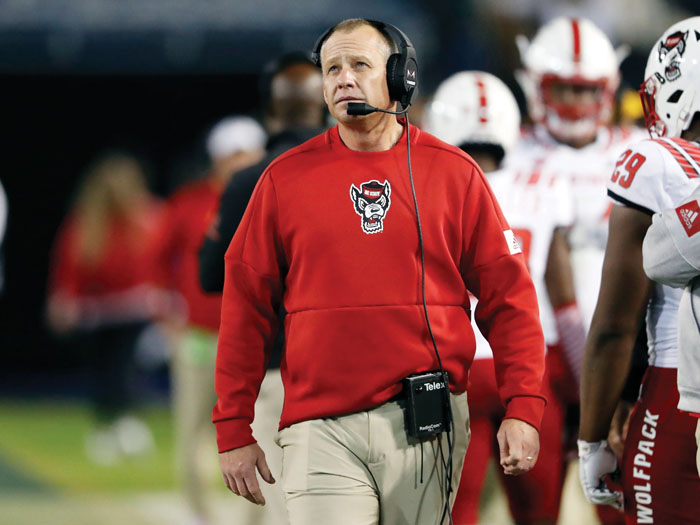 North Carolina State coach Dave Doeren isn’t giving up on the ACC’s chances and says, ‘I think that these next four weeks are going to be huge.’ sideline. (AP File Photo/John Bazemore)

ATLANTA — Clemson’s loss at Notre Dame was a severe blow to the ACC’s hopes of landing a team in the College Football Playoff.

Suddenly the ACC is in danger of being shut out of the playoff for the second straight year.

The ACC is without a top-10 team in the AP poll. Even with only three weeks remaining in the regular season, the league’s coaches believe it’s too early to count out the Tigers or other teams, including one-loss North Carolina.

“A lot of ball left and a lot of opportunity left,” Clemson coach Dabo Swinney said. “The only thing off the table for us is that we know we’re not going to be undefeated.”

The AP Top 25 has experienced some serious shuffling this season. When it comes to reviving the ACC’s sagging playoff hopes, the league needs more upsets of the current contenders for the four-team playoff.

“I think almost every year, a one-loss team makes it to the to the finals, it seems like,” N.C. State coach Dave Doeren said. “Clemson’s still a one-loss team. We’ll just have to see how it plays out. I think that these next four weeks are going to be huge in college football.”

No. 15 North Carolina (8-1, 5-0) sits atop the ACC’s Coastal Division. Clemson already has clinched the top spot in the Atlantic Division.

Swinney is using his team’s 2016 national championship season as a reminder that dour projections in early November aren’t always accurate. He said the Tigers were counted out following their first loss to an unranked Pittsburgh team in early November. Clemson then won its final five games, including playoff wins over Ohio State and Alabama.

“I’d be lying if I said we didn’t want to make it to the playoffs, but I think right now our focus is getting back on track,” Clemson left tackle Jordan McFadden said. “If we win out, I think (playoffs) will take care of themselves.”

Clemson’s loss to Notre Dame doesn’t just hurt the Tigers. The loss removes some of the glitter that would be added to North Carolina’s season if the Tar Heels reach the ACC championship game and beat the Tigers.

North Carolina coach Mack Brown just wants his Tar Heels to take care of their business this weekend at Wake Forest.  “Your four changed every week,” Brown said, adding experts keep saying “’They’re a lock’ and then (top teams) get upset. And it happened this weekend.

“It’s just crazy to see how much difference is there. So what we’ve told our guys is just keep playing. Don’t worry about it. Don’t worry about anything except Wake Forest. And really and truly, all the other talk about College Football Playoff and championships and all those things are fun for fans, they’re fun for media. They’re only distractions for kids.”

The ACC had a team in the first seven playoffs. Clemson made the four-team playoff in six consecutive years, winning two championships, before missing the cut last year. Florida State represented the ACC in the 2015 playoff.

Clemson wasn’t the only top-five team in the AP Top 25 to lose last week. Tennessee dropped from a tie for No. 2 to No. 5 with a loss at No. 1 Georgia. More upsets could open the door for Clemson or North Carolina.

“There’s just a lot of football left,” Doeren said. “And I don’t think the ACC is out of it yet.”