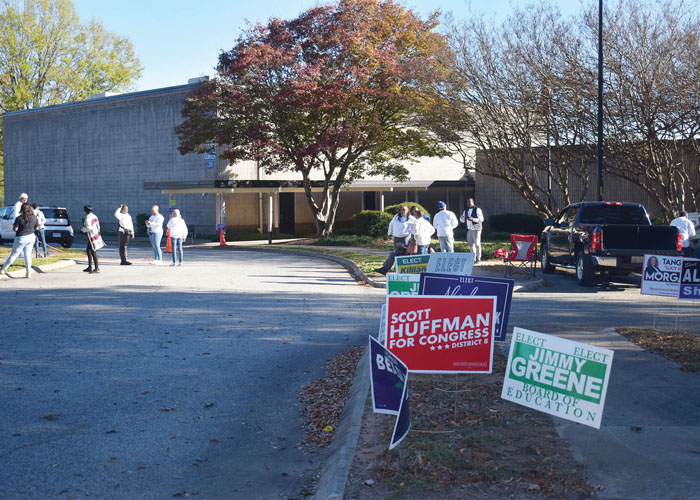 Volunteers gather outside of the Salisbury Civic Center, passing out flyers to voters entering the polling station. Charlie Drape/Salisbury Post

SALISBURY — Voter turnout in Rowan County in Tuesday’s midterm elections was slightly higher than in years past, with 49.3 percent of registered voters casting their ballot either through early voting or on Election Day.

Elaine Hewitt, chairman of the Rowan County Republican Party, said she believes the lack of Democrat candidates reduced excitement over individual races that might otherwise have pushed turnout over the 50 percent mark.

“Of course we are disappointed that our candidates did not do better,” said Geoffrey Hoy, chairman of the Rowan County Democrat Party. “We are proud of them for entering their prospective races. Congratulations to the winners. A special congratulations to Sabrina Harris elected to the Board of Education and a special thanks to Jean Kennedy for her decades of service on the Board and to education here in Rowan County.”

While the numbers below do indicate winners of the elections, the N.C. Board of Elections will hold a Zoom meeting Nov. 17 at 5 p.m. and Nov. 18 at 11 a.m. to count absentee supplemental and provisional ballots for the 2022 General Election and formally certify results.

In the Soil and Water Conservation District, there were two positions available, so one went to Cheryl McCoy Correll with 27,980 (50.34 percent) and the second went to Bruce Rider with 26,961 (48.51 percent). The District is made up of five members, three of which are elected and two appointed. Rider was an incumbent, and Correll had been appointed to fill a vacated seat. The four-year terms are staggered, meaning in two years, the one additional seat will be up for election.

Carl Ford easily was re-elected to District 33 seat in the N.C. Senate.

All vote totals are unofficial until they are certified.

According to the Associated Press, Republican Dan Bishop won reelection to the U.S. House in North Carolina’s 8th Congressional District.

Some polling stations reported having short lines off and on through the day, and in East Spencer, Mayor Barbara Mallett said there was a steady stream of voters.

“We’ve had people coming through all day long,” she said earlier Tuesday. “Some have made up their minds on voting, so we have other information on local events and happenings, and some are still looking for information on candidates and we give them everything we can.”