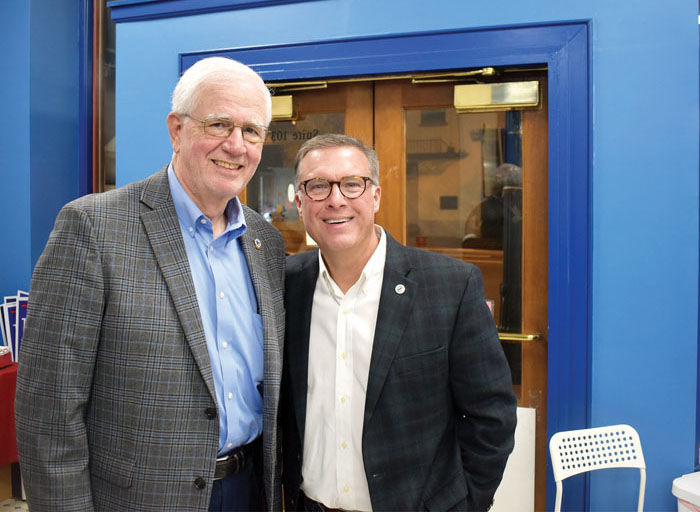 Re-elected commissioners Jim Greene and Greg Edds pose for a picture while celebrating the election results at a watchparty in the Rowan County Republican Party headquarters. Charlie Drape/Salisbury Post

It was a sweep for the Republicans. Edds, along with incumbents Jim Greene and Judy Klusman, reclaimed the three seats that were up for re-election comfortably, securing another four-year-term on the commission.

Edds, who served his last term as the commission’s chairman, received 26.82 percent of the vote, with 32,854 votes.

All three Republicans were first elected in 2014, making this their third term on the commission. They will rejoin Republicans Mike Caskey Jr. and Craig Pierce, whose terms end in 2024.

Over 60 people joined Edds and Greene at the Republican headquarters and celebrated with drinks, food and good spirits.

Both Edds and Greene said they were looking forward to continuing to improve the county’s schools in their next term, while also commenting on the growing development throughout the county and the opportunities that will arise for residents through that.

Greene specifically mentioned the $45 million development that is currently under construction at Rowan-Cabarrus Community College. An advanced technology education complex, aptly named the Technology Education Complex, is being built on the college’s North Campus in Salisbury and is due to be complete by 2024.

Speaking on the development, Greene said it was “one of the big reasons I wanted to run another entire term, to get that completed.”

“Rowan County is really in the middle of it now and the things we’ve been working for are really coming to fruition,” Edds said. “It’s a great time to be in Rowan County.”