More than 3,000 flags planted at City Park for Veterans Day 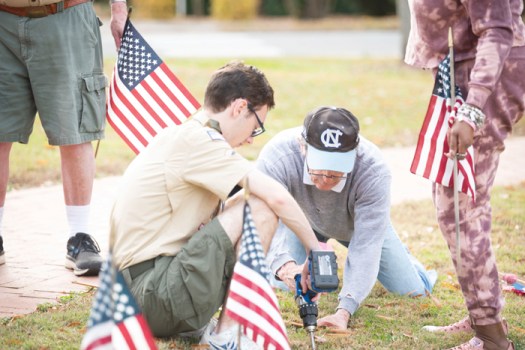 Eagle Scout Layton Barber drills a hole for the flag veteran Ronnie Smith prepares to plant in the ground along the outer edges of City Park. Photo by Elisabeth Strillacci 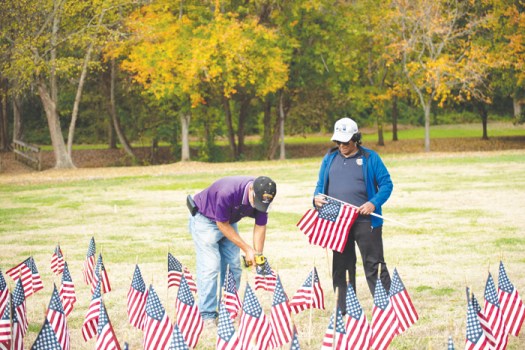 Hercules Shannon, who organizes the flag display at City Park to honor veterans each year, is helped by Queen Williams in creating a Field of Flags Saturday morning. Photo by Elisabeth Strillacci 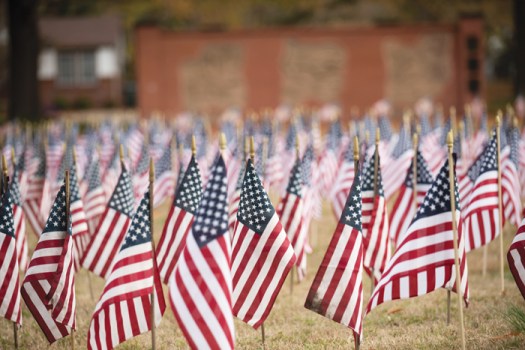 Part of the Field of Flags display created at City Park Saturday. Photo by Elisabeth Strillacci

SALISBURY — A small but devoted group gathered at City Park on Saturday morning to plant nearly 3,000 flags around the circumference of the park and in the center as a “field of flags” in preparation for Veterans Day on Friday.

Hercules Shannon began putting flags at the memorial park “probably six or seven years ago,” he said, as a way of drawing the public’s attention to the holiday.

Boy Scouts were invited to assist in the effort, and Layton Barber, an Eagle Scout from Troop 324, was on hand to help drill holes and plant the flags.

“I think this is important,” Barber said.

Queen Williams, who has always worked to support veterans and the American Legion Auxiliary, said she “is always happy to participate in events that recognize our veterans, especially on this holiday. Too many people have come to see it as just a day off, but we need to remember and honor those who have been veterans and those who are still serving.”

The plan, according to veteran and community activist Ronnie Smith, was to surround the park with flags, then to create a full “field of flags” in the center. Because the ground has already begun to harden with the cold nights, the team used drills to prepare holes for the two-foot flag poles.

Shannon pays for the flags out of his own pocket, this year meaning he likely has at least $2,500 invested, and “I will do it by myself if I have to” when it comes to planting the flags, but he welcomes any and all help. His goal, he said, is to continue to find ways to recognize veterans and their service throughout the year.

“We don’t currently have anything for POWs or those still MIA,” he said. “I’m hoping to come up with some sort of event in the summer to honor those groups, but it’s still a work in progress.”

Meanwhile, anyone who may be interested in helping Shannon with the Veterans Day flag planting or any other effort around recognizing veterans can contact him at 704-798-2032.