Beasley makes one last visit to Salisbury before Election Day 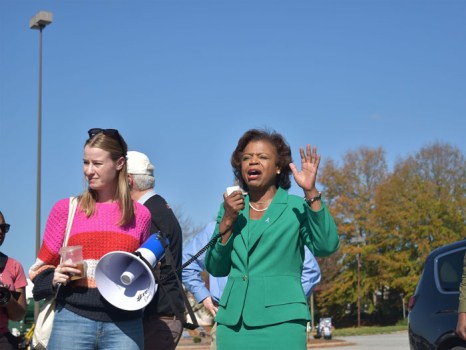 Cheri Beasley with her press secretary, Amelia Fox, speak into a bullhorn to a crowd of supporters at the West End Plaza on Friday. Charlie Drape/Salisbury Post 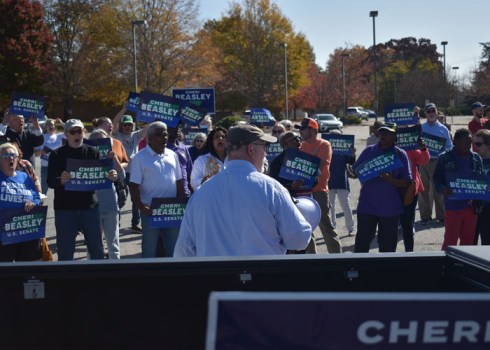 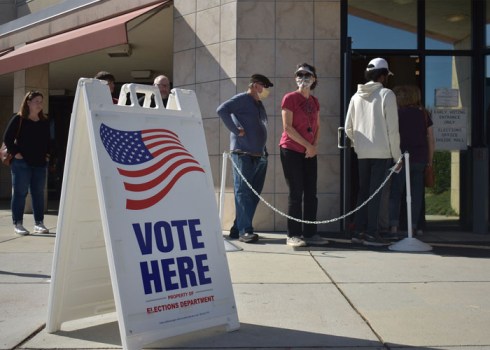 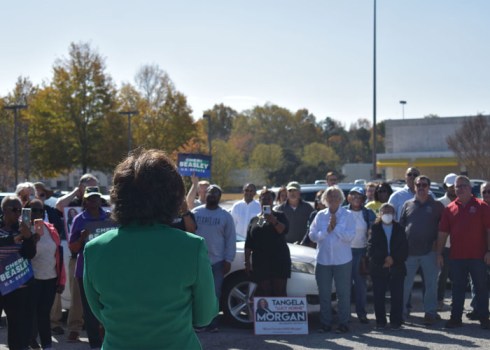 Cheri Beasley speaks to a crowd of supporters at the West End Plaza on Friday.

SALISBURY — More than 100 people gathered at the West End Plaza parking lot for North Carolina’s Democratic nominee for Senate, Cheri Beasley, on Friday, waving signs and shouting chants like “fired up and ready to go!”

Beasley, the former N.C. Supreme Court chief justice, was visiting the West End polling station to give a speech and encourage voters in her base before Tuesday’s midterm elections as part of her “For the People Get Out the Vote Tour.” She gave a 10-minute speech asking her supporters to spread the word about her campaign and urging them to go out and talk to people who may not be planning to vote in the midterms in hopes of changing their minds.

“They see candidates come to communities every single election cycle and make promises and nothing ever changes,” Beasley said.

Beasley talked about how the upcoming midterms will have an impact on seniors and advocated for keeping Social Security and Medicare. She also spoke on the inflation rate that is effecting the entire country and promised that if she is elected she will bring high-paying jobs to Rowan County and other rural communities.

“I am labor,” Beasley said matter-of-factly, lamenting the fact that “one third of us make less than $15 an hour,” and telling the crowd that she will fight to increase wages and worker’s rights.

“You can count on me to make sure we’re bringing good opportunities here and good paying jobs.” Beasley said. She spoke on fighting for students, teachers and schools to improve the education system in North Carolina.

Beasley railed against her opponent, Republican Ted Budd, for refusing to vote to lower the cost of prescription drugs and putting “corporate interests and his own (interests) above ours here in North Carolina.”

“I’ve been fighting for North Carolina for nearly 30 years and I’m not going to stop now,” Beasley said.

Beasley visited Lexington in Davidson County earlier in the day and was traveling to Mecklenburg for a “county community conversation” after her stop in Salisbury.

Showing her support in the crowd and holding a “Cheri Beasley U.S. Senate” sign, Dottie Hoy of Fulton Heights, explained her reason for attending the rally simply.

“Well Cheri Beasley’s coming, what else are you going to do?” Hoy said. “Support her. Get out here. Get out the vote.”

Volunteer Keith Townsend, a retired teacher who taught at West Rowan High School, was passing out flyers in the parking lot outside of the polling station. He said his reason for attending Friday’s rally was that in his mind “our system is under assault and we have to try to protect it.”

“The vote is, like a lot of Democrats will tell you, a vote to protect democracy,” Townsend said.

Tents for Beasley and Republican nominee Ted Budd were set up in the parking lot, with volunteers and poll-workers passing out flyers and giving information to anyone who was interested. Early voters were lined up outside the door of the West End Plaza polling station. Election Day is Tuesday, with polls opening at 6:30 a.m. and closing at 7:30 p.m.