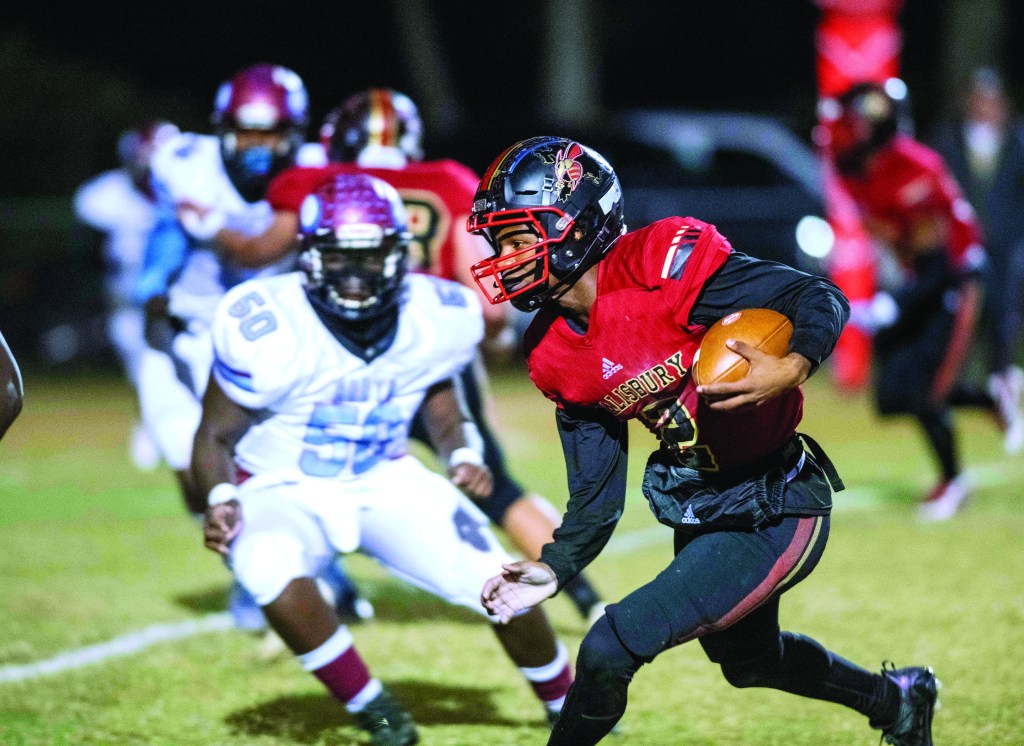 Nothing came easy Friday night when the heavily favored Hornets scratched out a 28-16 victory over visiting Brevard in the first round of the 2A state football playoffs.

“Brevard came in fired up and ready to play,” winning coach Clayton Trivett said, moments after No. 6 seed Salisbury (10-1) booked its 10th straight triumph and advanced to next week’s second-round bout with 11th-seeded Pine Lake Prep. “And we didn’t respond too well in the first half. We just found a way to finish.”

Salisbury needed a pair of fourth-quarter touchdowns to sidestep pesky Brevard, the No. 27 seed. The Blue Devils nearly matched SHS punch-for-punch for three periods before explosive running back JyMikaah Wells — shackled for much of the game —  broke free for a 34-yard touchdown burst right down Broadway and 21-10 lead early in the fourth quarter.

“We are way better than this,” Wells emphasized after rushing for 107 bone-crunching yards and his 29th TD. “It just seemed like we were losing the first step. It took a while for the entire offense to start focusing better.”

That first step was in the trenches, where SHS center Bryan Rosado reported Brevard’s defensive linemen were a handful to restrain.

“They definitely came to play,” the senior said after Salisbury was limited to 10 first downs and 272 total yards. “They were very good at confusing the guys up front. Plus we couldn’t contain their linebackers. But on that touchdown run, we noticed they were scooting out, playing the outside. So we ran it where they weren’t — up the middle.”

“He’s a great running back and we did bottle him up most of the night,” Coleman said. “But he found a crease and we left a crease open that time. At the end of the day, you’ve got to have somebody on the backside-eight and that time we didn’t. We did every other time.”

Quarterback Mike Geter, the elusive junior who completed 11 of 18 passes for 88 yards, seemed to read Brevard’s defense like an eye chart. “When we spread out the receivers, they’d put five in the box,” he indicated. “Five in the box means we can run the ball.”

Brevard (5-6), which led 10-7 early in the second quarter, answered four snaps later when senior Nashon Griffin scored on a 63-yard touchdown run down the right sideline. “They had us outnumbered there in the boundary and we didn’t do a good job tackling,” Trivett explained.

A botched two-point conversion try left the Hornets clinging to a 21-16 edge with more than 10 minutes to play. Following an exchange of punts, Salisbury regained possession on the Brevard 32 with 5:07 remaining. Three running plays failed to produce a first down, but on fourth-and-3 Geter spiraled a chest-high 25-yard TD pass to wide-open tight end Damien Brandon in the center of the end zone.

“The linebackers lined up wide, outside of me,” Brandon smiled after making his only catch of the night. “And there was no safety in the middle of the field. We just caught them off guard, because every other time I lined up, I was just in there to block. They were sleeping on my receiving ability.”

“Just the way he lined up,” Trivett said. “He ran straight down the field.”

Coleman labeled the play a busted coverage. “My kid didn’t get the call on the other side of the field and didn’t come over,” he said in a rapid-fire sequence. “That’s my fault. He didn’t see me, so it is what it is. I’ll take the blame. Should’ve called time out.”

Salisbury locked this one in the vault with a final defensive stand. Brevard’s last possession began at its own 20-yard line and immediately went south when Salisbury’s Dashawn Brown pancaked Blue Devils’ quarterback Colten Swicegood for a 5-yard sack on first down. On fourth-and-4, Brown was part of a swarm that toppled running back PJ Deshauteurs after a 3-yard pickup.

“Going forward, we’ve just got to do a better job preparing,” Trivett concluded. “That’s on us as coaches. We’ll get everybody back to work and ready to play next week.”

Round 2, for certain, promises to be even more challenging.

“Yeah, but they’re a very good football team,” Coleman said before boarding Brevard’s team bus for the three-and-a-half-hour trip home. “They can go as far as they want.”

NOTES: Salisbury finished with 184 yards on the ground. Geter ran for 53 and scored on an 18-yard bootleg to open the scoring. He later threw his 14th and 15th TD passes — all that with a bothersome wisdom tooth that will be addressed after the season. Brandon’s touchdown reception was his second of the year. … Each team punted six times. … The victory was Trivett’s first in the playoffs as a head coach. He’d lost his previous two. … Carson High School’s Don Mitchell handled the public address duties. … Pine Lake Prep (also 10-1) advanced with a 38-20 first-round win against West Stokes. The Pride launched its season with a 9-game winning streak.