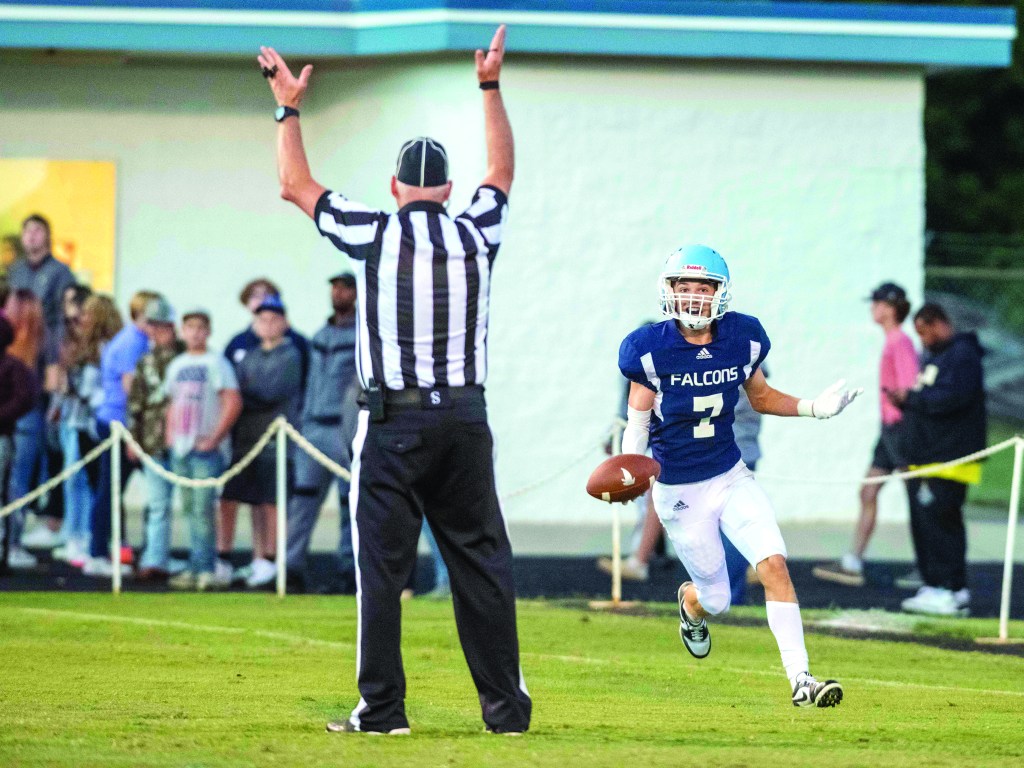 The Falcons lost Evan Kennedy, a sophomore who has been the Falcons’ most dynamic player in quite a few games. He went down in practice with a knee injury.

“Hate it for the kid, a real tough injury,” West coach Louis Kraft explained. “It wasn’t an ACL. He fractured the growth plate attached to his femur and knee. He’s already had surgery — successful — and he should be back in the spring.”

West had to move on without Kennedy and did so. The Falcons, who finished second in the South Piedmont Conference, were rock-solid on Friday’s Senior Night against East Rowan.

The Mustangs stayed in the game for a half, but the Falcons eventually pulled away for an emphatic 51-0 victory.

“Our defense is playing very well right now,” Kraft said. “Offensively, we got some of that spark back tonight that we’ve been missing. We were explosive.”

West’s first two touchdowns were feel-good scores on a chilly Senior Night. Paxton Greene took a slant 69 yards to the end zone. Then Tanner Poole caught a short flip from Graham for a 2-yard touchdown.

“We had some goals going in, were hoping to get those senior receivers involved in the passing game, and those kids put it in the end zone,” Kraft said. “Both were overdue to get one. Tanner got robbed of one early this season, so really happy for him.”

East (1-9, 1-5) didn’t just melt away immediately. Jaden Reed had an interception and McCall Henderson had a sack, as the Mustangs kept the scoreboard at 14-0 until the final minute of the first half. Juan Arteaga’s 32-yard field goal boosted the Falcons’ advantage at the break to 17-0.

Senior DB Jacob Perry had an interception for the Falcons.

It all got of hand for East with one wild minute in the third quarter. West scored three times in that minute, a vintage Falcon snowball that turned a decent 17-0 ballgame into a 38-0 blowout.

“You knew we had to get that senior tight end a touchdown,” joked Kraft, a former tight end for the Falcons.

Then Aubree Robinson turned a pass by East’s southpaw quarterback Gavin Walker into a pick-six.

After senior Alijiah Gray, who batted down two passes, recovered an East fumble, the Falcons struck again immediately — Graham to Stockton for a 38-0 lead. Stockton’s burst caused headaches for East all night on slant patterns.

Workhorse senior back Landon Jacobs, who had 120 rushing yards, broke a touchdown run late in the third quarter for a 44-0 lead that triggered a running clock.

West played a lot of clean jerseys in the fourth quarter. Backups and jayvees added one more score. Backup QB Brody Tucker scored on a 9-yard run for the 51-0 final.

A week that began with a horrible break for the Falcons ended with the first 5-0 county sweep in Rowan history, lots of positives, lots of smiling seniors and lots of happy fans.

With the assistance of that running clock in the fourth quarter, Kraft even made it to the locker room in time to listen on the radio as Mooresville pulled out its game with Lake Norman on a last-second field goal. Kraft was happy for former West Rowan boss Joe Nixon. Nixon’s 9-1 Mooresville team ran the table in the tough 4A Metro Conference.

Blake Hill, who trampled South Rowan for 206 yards last week, got only 27 on 15 carries against West, as the Mustangs closed the books on a tough season.

Walker was picked off twice. He was sacked by Kevin Toomer and Hunter Miller, among others, and was pressured all night. He managed only 57 passing yards.

West is seeded 15th in the 3A state playoffs and will host No. 18 Franklin in the first round.