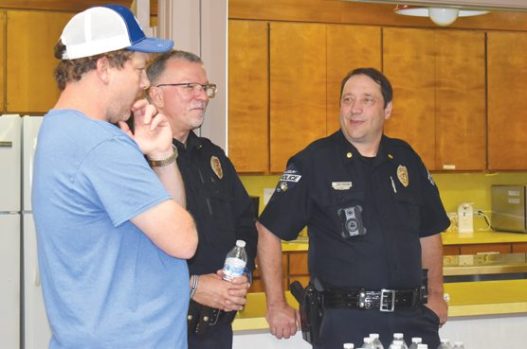 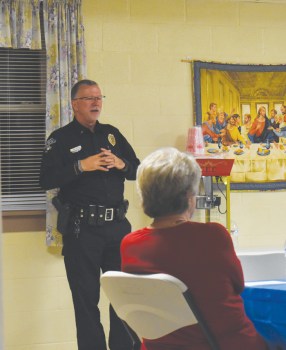 Police Chief Jerry Stokes explains the day in and day out of policing. Photo by Elisabeth Strillacci

Held at the Milford Hills Baptist Church on East Colonial Drive, more than 30 people attended to share thoughts and ask questions of Police Chief Jerry Stokes and a number of officers. The events are funded by a $25,000 grant from Duke Energy, applied for by Stokes and the city’s Director of Diversity, Equity and Inclusion Anne Little. Both have been joined by Rev. Dr. Roy Dennis of Gethsemane Missionary Baptist Church in leading the meetings, which are aimed at learning both community concerns and what the department is getting right.

“I think we’ve gotten some truly beneficial information from these,” Stokes said. “We know we still have work to do in some areas, but we have made some positive strides. What we have heard a lot of is that people want to get to know their officer, the one that patrols their neighborhood, and that is something that takes time. But that is the kind of thing we want to hear.”

Stokes said he has also gotten positive feedback from Mayor Karen Alexander and City Manager Jim Greene. Both have attended each of the conversations.

“Engaging the community is a priority,” Greene said. “We certainly want to continue opportunities to communicate with neighborhoods, and not just with the police department, but others as well.” Greene said continuing these events is something he plans to discuss with the city council as a whole, because there is a cost element, but he believes it is worth continuing.

“It’s about togetherness, teams,” he added. “It’s us working together to resolve issues and implement ideas.”

“We need all hands on deck, together, to have a community that is for all of us,” added Dennis in inviting residents to speak up. “We need to break this code of silence.”

A number of those in attendance spoke up with questions about police actions, about resurrecting Salisbury Neighborhood Action Group (SNAG) meetings, about addressing bias, about how the department handles the stress officers are exposed to, about how officers deal with the homeless population and even about what exactly the job of a police officer entails.

“These are conversations we need to keep going,” Stokes said.