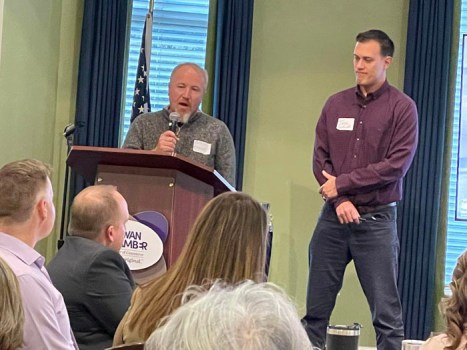 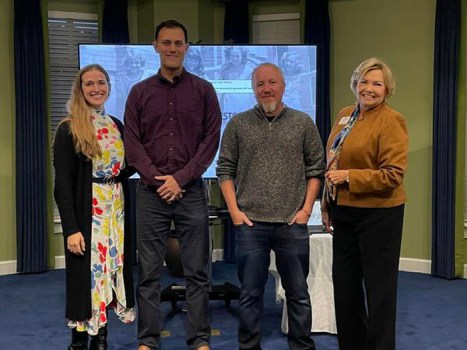 SALISBURY — More than 120 business leaders attended the Rowan Chamber’s Power In Partnership breakfast on Thursday morning to hear Josh Barnhardt and Brett Krueger speak about the redevelopment of the Empire Hotel property. The event was held at Trinity Oaks and was sponsored by Rowan-Cabarrus Community College.

“The feedback we have had from their presentation has been fantastic,” said Chamber President Elaine Spalding. “The Empire Hotel was featured on the recent Historic Salisbury Homes Tour with one of the hotel rooms completely refurbished. They also did a pilot television show for HGTV.”

Sada Troutman, executive director of Downtown Salisbury, Inc. (DSI) introduced Barnhardt and Krueger and said she sees them out of her window every week meeting with investors, giving tours and working on the property. DSI owns the Empire Hotel and has a task force working on the transition to the developers.

Barnhardt and Krueger shared a detailed presentation on the Empire Hotel re-development. At completion, the property will include a boutique hotel with 25 luxury historic rooms; the original 1906 Grand Ballroom completely restored with seating for 200 guests; 38 apartments; a full-service spa and gym; a fine dining restaurant/bar area; and, four to six retail spaces on the first floor. Their timeline calls for the plans to be complete by the second quarter of 2023. Construction would begin shortly after that and take approximately 24 months.

“Please be patient with us. We want to restore everything back to the original historic details. As may of you know with historic preservation, it takes some time to peel back the layers of decades of neglect and previous renovation projects,” said Krueger.

“Our team is passionate about this community and we want you to be proud of the Empire Hotel once again,” said Barnhardt. He listed The Sherbert Group in Charlotte and Rowan County native Eddie Belk with Belk Architecture as the other partners in the project.

Krueger has over 25 years of construction and development experience with signature projects like the Ivey’s Hotel in Charlotte and the Windsor Hotel in Asheville.

Being a second-generation builder and having an early strong real estate sales background gave him the experience to form his own company, Corinthian Development. He excelled as one of the top builders and developers in his market producing over $70 million in homes and developments. With over a dozen developments, Krueger has directly developed properties from Charlotte, Lake Norman and Banner Elk.

Barnhardt was raised in Salisbury, where he developed a fascination with history and old buildings. His mother, Debbie Barnhardt Bassinger, owns Barnhardt Jewelers in Salisbury.

Coming from a family of entrepreneurs and construction trades he learned the value of hard work at a young age. After living in historic neighborhoods in New York City, Charleston and Charlotte he has a passion for creating distinctive downtown living spaces. His 20-year career has included international technology consulting with IBM, growing a London-based startup, and leadership positions with Bank of America and Wells Fargo before founding Iron Horse Development. He has a B.A. and MBA from UNC Chapel Hill.

The Chamber’s next PIP breakfast will be on November 17 with Hotwire Executive Sue Kelly speaking. For more information, contact the Rowan Chamber at (704) 633-4221 or info@rowanchamber.com or www.rowanchamber.com