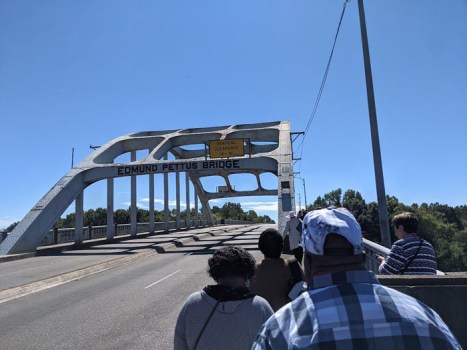 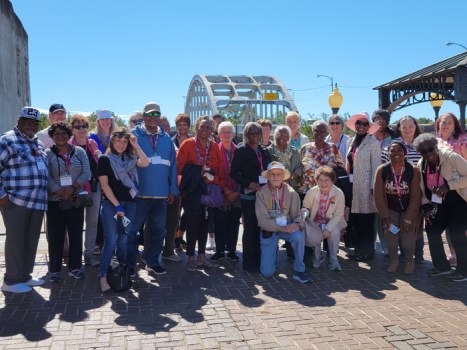 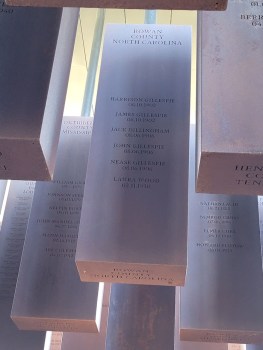 The Alabama National Memorial for Peace and Justice. Submitted photo

In 2019, the Conversations That Matter Committee at St. John’s Lutheran Church planned and organized a trip for the Salisbury community to Montgomery and Selma, Alabama. The purpose was to provide an opportunity to learn more about the history of the Civil Rights movement. Postponed for two years because of COVID, a diverse group of 28 people boarded a bus on Sept. 28 for a very memorable four days on tour.

After arriving in the afternoon and spending Thursday night in a local motel, the group set out on the bus Thursday morning with our guide. Our first stop was the Rosa Parks Museum and Library where we learned more about Montgomery’s segregated buses. Black passengers had to pay at the front of the bus, get off and then back on at a door near the rear of the bus, the segregated section for Black passengers. If the White section was full, the bus driver could make Black passengers give up their seats and move to the back. Rosa Parks, a courageous Black woman, when told by the bus driver to give up her seat and move to the back of the bus, refused. She was arrested and jailed. On the day of her trial, Black people refused to ride the buses, thus beginning the yearlong Montgomery bus boycott which became a major step in the struggle for equal rights and the Civil Rights Movement.

Our next stop was the Equal Justice Initiative’s ‘Legacy Museum: From Enslavement to Mass Incarceration’ situated on a site where enslaved Black people were forced to labor in bondage. The museum employs technology to dramatize the horror and terror of enslavement, lynchings and legalized racial segregation. It depicts the painful truth about the 400-year history of slavery and racism in America.

Following lunch, we departed for the Freedom Rides Museum located in the restored Greyhound bus station. In 1961, a mixed-race group of Civil Rights activists (called Freedom Riders) rode interstate buses into the segregated Southern United States to challenge the non-enforcement of the United States Supreme Court decisions outlawing segregated interstate buses and waiting rooms in terminals serving buses that crossed state lines. Award-winning exhibits trace the Freedom Riders’ journey through the South along with historic images of both those who supported the Freedom Riders and those who opposed them. Many riders were beaten and jailed but the buses kept coming.

The next day (Friday, Sept. 30) we departed for the Lowndes County Interpretive Center. This National Park site is dedicated to those who peacefully marched from Selma to Montgomery, the location of the Alabama State Capitol, to gain the right to vote. The center serves as a repository of information for the unfortunate and significant events that occurred in Lowndes County during the march.

After leaving the Interpretive Center, we continued on to Selma, the starting point of the voting rights march. We then walked across the Edmund Pettus Bridge. On this bridge on March 7, 1965, voting rights marchers who left Selma for a planned walk to Montgomery were beaten and clubbed by the Dallas County posse and Alabama state troopers in what became known as “Bloody Sunday.” After walking across the bridge, we stopped at the National Voting Rights Museum. This museum displays items and stories related to the voting rights campaign. After President Lyndon Johnson signed the Voting Rights Act on Aug. 6, 1965, nearly 7,000 African Americans registered to vote in Dallas County, Alabama, resulting in the election defeat of the segregationist sheriff who led the Bloody Sunday attack on the marchers. One member of the group, Catrelia Hunter, told us that she wanted to march across the bridge in 1965 when she was in college, but her mother refused to allow it. She went on to say that she was glad to finally walk across the bridge.

Once again, we boarded our bus for the journey back to Montgomery to visit the Civil Rights Memorial Center which tells the stories of people killed during the fight for Civil Rights from 1952 to 1968. The memorial was inspired by Martin Luther King Jr.’s “I have a dream” speech. We will not be satisfied “until justice rolls down like waters and righteousness like a mighty stream” quoting the prophet Amos.

Our last stop of the day was the National Memorial for Peace and Justice. The National Lynching Memorial is a sacred space for truth telling and reflection about racial terror in America and its legacy. It was established by the Equal Justice Initiative to give much needed recognition to thousands of individuals who were lynched across our country. There are 805 hanging steel rectangles the size and shape of coffins representing each county in the U.S. where documented lynchings took place between 1877 and 1950. The Rowan County rectangle contains the names of six people lynched here. The Actions in Faith & Justice Remembrance Project, along with Soldiers Memorial AME Zion Church, St. Luke’s Episcopal Church, St. John’s Lutheran Church, The Robertson Foundation, and local community members, held a dedication event on Aug. 6 and 7 of 2021 to unveil a historical marker acknowledging six documented racial terror lynchings in Rowan County. The marker is located at the corner of North Church and West Liberty streets in Salisbury. This site is between the Oak Grove-Freedman’s Cemetery and the Rowan County Detention Center (near the original county courthouse) as a symbol of remembrance of the local history of racial injustice and the community’s civic duty and commitment to seek justice for all.

Both nights, members of the group participated in a “Circle of Reflection” to share our impressions of the day, the things we experienced, and the emotions we felt. Actions that were discussed included such things as supporting diversity, equity and inclusion efforts, attending Board of Education meetings, and the importance of voting.

After we returned home, some members of the group offered the following impressions. Mary Frances Edens said, “Our trip to Montgomery was life changing.” Angela Alford, added, “I am blessed to have connected with such amazing people. I look forward to a continued partnership and working together to push racial equity forward not just in schools but in our county.” Catrelia Hunter was emotionally moved by the experience sharing, “This experience gave me an even deeper appreciation for the struggles of my ancestors and those who paved the way for voting rights. Much of this powerful history is very painful to see, watch, and remember, but it inspires me, and it inspires others who travelled with us to Selma and Montgomery to continue efforts to promote racial equity and justice.” Alyssa Nelson shared, “I wish that experiencing the Legacy Museum was a required part of our country’s education. One can’t leave the museum without feeling how unjust our country still is today.” Everyone was obviously moved by our experiences in Montgomery and Selma.