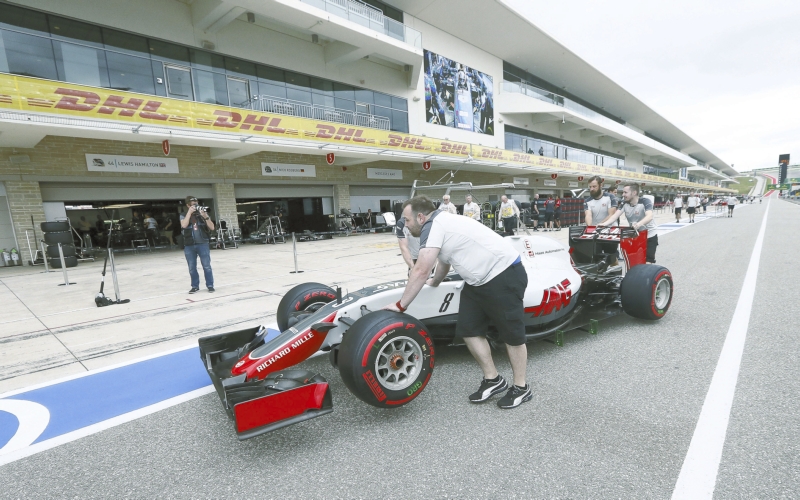 Haas' Formula One team has a new title sponsor heading into this weekend's race in Texas. (AP File Photo/Tony Gutierrez)

Even better for Haas, the only American-owned team in Formula One will be backed by a global company headquartered in Dallas.

MoneyGram was introduced as the new title sponsor for the Haas race team on Thursday ahead of the U.S. Grand Prix in Austin, Texas. The Kannapolis-based team will be called MoneyGram Haas F1 beginning next season and the two-car livery will change for a look that incorporates the red and white colors favored by both Haas Automation and MoneyGram, a digital money transfer company.

It is a three-year entitlement deal, The Associated Press has learned, and gives the Haas team an American-based anchor as it continues to fend off bigger F1 organizations tapping into the North American market.

“This was the best sponsor for us,” Guenther Steiner, team principal of Haas, told the AP. “We had interest, serious interest, from another company and we chose MoneyGram and one of the reasons was because the other company was not American.

“That matters a lot to me because we are the only American team, and we are showing how fast the sport has grown that a smaller team like ours can get a big sponsor like MoneyGram. It brings so much value to the team.”

“With this deal, I think we make that step that in a few years, we can fight for podiums,” he said. “I am not promising that for next year because we just came back from two years which were very bad for us and we recovered pretty well and will continue to improve, but it will take time.”

Haas, which is partially run from the shared North Carolina campus with the Stewart-Haas Racing NASCAR team, launched in 2016 as a way for Gene Haas to put his tool machine company on a global stage. Haas Automation has seen an international boost from its presence in F1, but Haas would like to make money, as well.

Steiner said the F1 team has yet to turn a profit with Haas and Haas Automation absorbing the losses. The need for outside sponsorship is vital and Haas has had a bad stretch of luck finding good partners.

Haas signed a multiyear deal ahead of the 2019 season with a London-based energy drink company and dropped the Haas Automation colors for Rich Energy’s black and gold look. But the two sides didn’t even make it to the end of the season before a bitter split that forced Haas to reevaluate its spending.

The team decided to essentially freeze spending ahead of the 2021 season, the last with that version of the F1 car. Haas cut costs by releasing veteran drivers Romain Grosjean and Kevin Magnussen, and signing a pair of rookies in Mick Schumacher and Nikita Mazepin.

With Mazepin came a new entitlement deal in which the Russian fertilizer company owned by Mazepin’s father was now funding the American cars. The red, white and blue on the the cars was rearranged to resemble the Russian flag, and that’s how the team ran in 2021 when Mazepin was one of the worst drivers on the grid.

Mazepin was due to return for a second season, but Haas reacted to Russia’s invasion of Ukraine by dropping both Uralkali and the driver a month before F1’s season opener.

Alex Holmes, chairman and CEO of MoneyGram, was aware of Haas’ sponsorship fiascos. Holmes wondered if the notion that Haas is one of the more cash-strapped teams on the grid has been fueled by a perception created on the popular “Drive to Survive” behind-the-scenes Netflix hit.

“They would not be in Formula One, competing in Formula One, if they had actual, real, financial trouble,” Holmes said. “At the end of the day, when you look at any sponsorship or looking at putting your name anywhere, there is a lot of reputational thought consideration. You want to make sure who you are partnering with are good people, they’ve got drivers who say the right things, and you want to have a good partnership you feel good about.”

MoneyGram, founded in 1980, has been involved in sports sponsorship for some time, including Dallas FC near its headquarters, but has now partnered with the sport with the fastest-growing North American viewing audience in its new deal with Haas.

Haas is a backmarker team and MoneyGram could have done deals with the paddock’s top teams. But with Haas it could get title sponsorship, and because F1 races on five different continents, the value of the deal was too good for MoneyGram not to buy the rights.

“The coverage we are going to get for that and the return on value — I mean, it’s expensive to sponsor a sport. It’s expensive to sponsor Formula One,” Holmes told the AP. “But when you get passive value, it’s very different from active value, and I think we’re getting just an incredible amount of active value just from the amount of global coverage in the sport and we know the MoneyGram F1 cars will be on TV nearly every week around the world.”