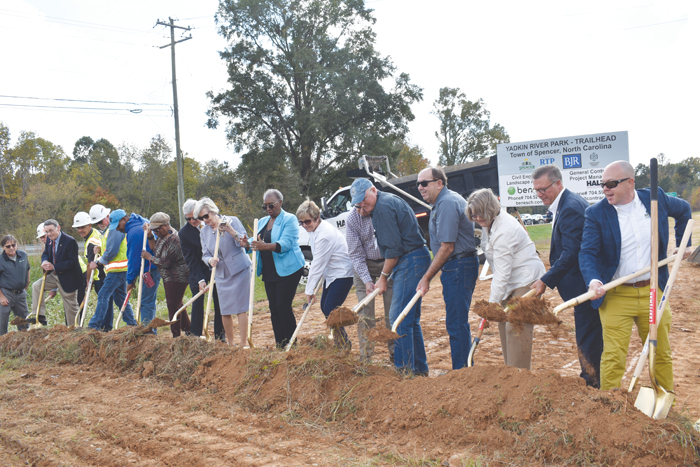 Mayor Jonathan Williams of Spencer, far right, shows all those participating in Monday's groundbreaking how it's done. Photo by Elisabeth Strillacci

SPENCER — Mayor Jonathan Williams welcomed visitors and supporters to the groundbreaking ceremony of the Rowan County side of the Yadkin River Trailhead Park project Monday afternoon.

On hand were a number of local government officials including Williams, Salisbury Mayor Karen Alexander, East Spencer Mayor Barbara Mallett, and numerous council members and aldermen. There were also people from Davidson County who were part of that side of the property’s initial development into a park and recreation area.

All participants gathered around a line of gold-painted shovels to help toss the first shovelfuls of dirt to mark the beginning of the physical work on the project.

The Rowan side of the park has been in both dream and development stages for years, said Williams, and the fact that it is finally coming to fruition is “absolutely incredible, and thanks to the support of everyone here.”

Spencer Town Manager Peter Franzese has said the town has an easement for the bridge from Davidson County that will allow it to make the connection directly to the bridge.

Williams thanked Alfred Benesch & Company, the firm that designed the trailhead, and Hall Contracting, Inc., the company that will be bringing those designs to life. 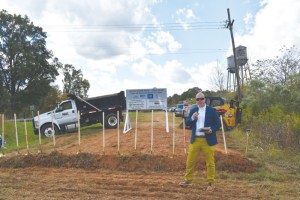 Spencer Mayor Williams welcomes supporters and dignitaries to Monday’s groundbreaking of the Rowan County side of the Yadkin River Trailhead project, expected to be completed in 150 days.
Photo by Elisabeth Strillacci

The town was initially about $200,000 short of the $754,000 price tag that would allow the town to build with no compromises on the plans. The town had set aside about $500,000 before COVID, but since the pandemic put things on hold, the cost of construction has gone up drastically. The town was able to procure some additional funds, but on Monday afternoon, Ronnie and Janice Smith, on behalf of Friends of Rowan, made a donation of $100,000.

“That means we are now fully funded for this part of the project,” said Williams. “We cannot thank Friends of Rowan enough for that.” Now that the project is physically started, it will take about 150 days to complete, with completion targeted for spring of 2023.

Smith said the project is personal for him.

“My grandad used to bring me here as a child to fish,” he said, standing on the edge of the Rowan side of the Wil-Cox bridge. “I want to preserve this, both the historic portion of it and the recreational. But it takes just that, preservation, and determination. I feel fortunate that we were able to help make this happen.”

The first two phases of the project, which have essentially been rolled into one, involve creating paved pathways, lighting, bench seating, landscaping and parking.