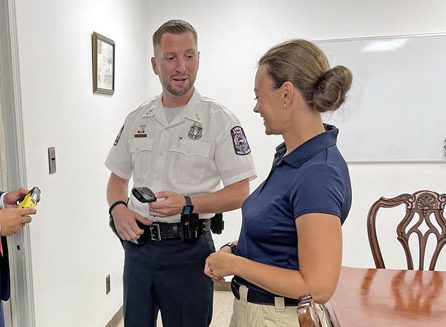 LANDIS —  The inaugural director of the town’s Public Safety Department, which combines both police and fire services, is moving on as of Nov. 11.

Dr. Zachary Lechette was hired as the first to oversee the combined departments of police and fire once the town made the decision to unify all under the single public safety umbrella. The suggestion to move to the public safety model was made in July of 2020 by former Interim Town Manager Leonard Barefoot.

Though the number of towns using the model remains small, it seemed to make sense for Landis, which needs full-time police and fire chiefs, but like many smaller towns, struggles against budget constraints of having both.

The town has since continued transitioning into a Public Safety Department model, adding several dual-certified employees within both the police and fire service divisions.

Lechette, who came to Landis from a 10-year stint with the Gastonia police department, has a resumé that made him a top contender for the position when it was created.

According to the town’s website, Lechette is a graduate of Nova Southeastern University where he earned his doctorate in criminal justice and organizational management. He holds a master of science degree in criminal justice from Fayetteville State University and a bachelor’s degree in criminology from the University of North Carolina at Wilmington. He is also certified as an Advanced Emergency Medical Technician (A-EMT). Prior to coming to Landis, Lechette served as a patrol supervisor for the Gastonia police department, a Special Agent for the SBI and DMV License and Theft Bureau, a patrol officer II for the city of Jacksonville, and as an Advanced EMT for Farmville Rescue and EMS. In 2009, Lechette joined the N.C. Army National Guard, 430th (EOD) Ordnance Co., where he served until 2015. He currently teaches as an adjunct professor at Belmont Abby College. He is certified as North Carolina General Instructor, CPR Instructor, RADAR/LIDAR Instructor and SFST Instructor.

He also attended and completed the Public Service Leadership Institute through Central Piedmont Community College in 2019. He was awarded his Advanced Law Enforcement Certification from the North Carolina Criminal Justice Education and Training Standards Commission in 2016.

Lechette, who gave the town his notice Wednesday, said he is “incredibly proud of all the things we have accomplished while I have been here, and how we have worked to make that vision a reality. I hope to see the town continue that trend under a combined public safety department, but I have not been informed of any plans.”

Lechette said his decision to leave the town was prompted by family considerations. “After careful consideration, my wife and I have made the difficult decision to pursue new opportunities closer to family, and thus, plan to relocate away from Rowan County,” he wrote to the board of aldermen. “My last day with the town of Landis will be on Friday, Nov. 11. I want to express my sincerest appreciation to you and the town for giving me the honor and privilege of serving as the inaugural public safety director. The town of Landis has the most dedicated, hardworking, and caring employees that I have ever had the pleasure of working with.”

He went on to list the accomplishments he is most proud of, including:

• Obtaining grant funding for both departments

• Hiring additional staff within both departments

• Updating the policies and procedures within both departments

• Obtaining and replacing needed equipment within both departments

“He is going to leave a huge, huge void when he leaves,” said Town Manager Diane Seaford. “To have taken two departments that, I think, were a little bit competitive and to have brought them together into one unit that performs together, works together is tremendous. I don’t know how the town will decide to proceed, of course it will be up to the board of aldermen to decide if they will continue with the public safety operations or if they will go back to separate police and fire departments, but I do know we were on the way to becoming a model for a lot of small towns with our approach. It’s a great cost savings for small communities and we were paving the way.”

She added that being the first in the state to complete the NCLM Fire Risk Review process was a tremendous accomplishment, and that she is “personally saddened that Dr. Lechette is leaving us because he has made a tremendous difference, and unless we have a miracle, I am not sure we will find someone as qualified to take his place.”

Both Mayor Meredith Smith and Mayor Pro Tem Ashely Stewart said they had just received Lechette’s notice and would reach out to the Post once they had an opportunity to discuss the situation.

Lechette said he and his family will be moving toward the Raleigh-Durham area and though he declined to comment on his own plans, he noted that his wife has an offer in the area and more than anything, “We want to be closer to family. But I am incredibly grateful for all the opportunities the town has afforded me.”