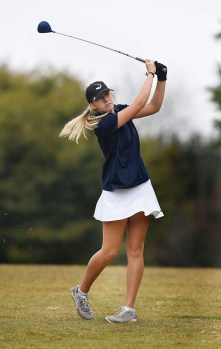 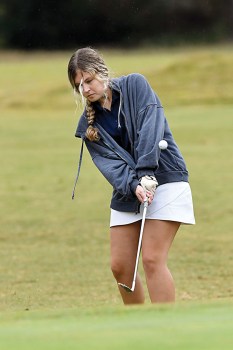 East Rowan's Addison Queen using an iron to chip onto the green, photo by Wayne Hinshaw, for trhe Salisbury Post

The Rowan County Championships were scheduled at McCanless for Wednesday at 1 p.m., but the tournament looked dicey.

Most of the golfers hadn’t played 18 holes in one day all season and weather issues threatened to make it a long and gloomy day.

The response was simply, “Bring your raincoats.”

“So we brought our rain jackets and our umbrellas,” Merrell said. “I’ve seen weather really mess things up for some very good players. I was concerned. I told our girls they had to be mentally prepared for anything.”

Scores were higher than usual, higher than Merrell wanted them to be, but as is usually the case, East had the lowest ones.

The Mustangs handled things well enough that they had the three best scorecards. Hannah Waddell and Addison Queen tied for medalist honors with 91. Emma Cornelison was alone in third at 96.

The bottom line was East’s sixth straight team championship in the countywide event.

Merrell steered clear of it, but she was happy with the decision not to hold a playoff to determine a single champion. Co-champs was a win-win for her.

“I think it’s very cool for two East girls to be champions,” she said. “They’re both competitors, and I think this is great motivation for both of them, as we head for the regional. Hannah has been out front for a a few years, but Addison tied Hannah in three matches this season and she’s been nipping at her heels. Both of them really want to win, and they’re pushing each other. That’s a positive thing for our team.”

They played the 18 holes mostly in light drizzle, but there were times when the rain got heavier.

“I really didn’t think it was that bad — certainly not as bad as I was afraid it might be,” Merrell said. “I know Hannah and Addison both had their problems on No. 11 (a par-4 hole dominated by a water hazard). They maxed there.”

“Max” for Wednesday’s tournament was double par, so the Mustangs took 8s on No. 11.

“I didn’t get to see them on a lot of holes, but I saw both of them hit some great drives and make some great shots,” Merrell said. “Brian Lee saw Hannah make about a 20-foot putt for a birdie on No. 6. Without that long putt, she doesn’t tie for the championship.”

It’s the first championship for Queen, who also is a junior.

Cornelison is a senior. In a nice gesture, all 10 of the county’s senior golfers were honored with a Senior Night.

The top eight finishers were honored as All-Rowan County.

The three Hornets and North’s Elder had just played 18 holes in the Central Carolina Conference Championships on Tuesday.

The CCC girls who qualified will be in the 1A/2A Central Regional at Stonebridge Golf Club in Monroe.

Next for the SPC qualifiers will be the 3A West Regional at Cedar Rock Country Club in Lenoir. That will be 18 holes on Tuesday.

“Practice can fix some of the things that didn’t go quite right today,” Merrell said.

NOTE: A story on Sechler’s comeback will be in Sunday’s Post.