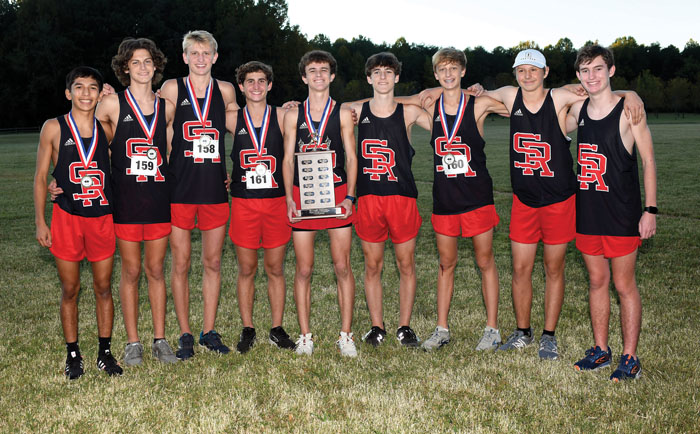 SALISBURY — South Rowan’s strong boys cross country team entered the season with lofty, state-level goals, but a stiff test for the Raiders has come from just a few miles away.

On Thursday at Dan Nicholas Park, the Raiders and Cougars squared off again in the Rowan County Championships.

South was ready and topped the Cougars 26-38 in a two-team race. West Rowan (96), East Rowan (98) and Salisbury (129) have good individuals, but they were well back in the team scoring.

“We dialed in really well for this meet,” Downs said. “It’s not hard to get up for the Rowan County Championships. It’s what we’ve been talking about for months. It’s what our guys have trained so hard and so long for. All seven of our runners knew exactly what their job was, the time they needed to run, and the guys they needed to beat. They went out there and did their jobs. Really proud of another county championship because Carson is very good.”

South won its fifth straight county championship. They’ve all been led by Julians. Noah led the way for the first three. Eli, who was a freshman when Noah was a senior, has paced the last two.

Eli, a junior who broke 16 minutes in an elite meet earlier this year, ran 16:27 on Thursday.

That’s an excellent time, especially for someone who basically was running solo.

“Eli has been great, not just as far as running, but leading and encouraging all our guys,” Downs said.

Carson’s James Anderson, the runner-up, had a super meet — 17:33 — but he was more than a minute behind Julian. Anderson’s teammate, Jorge Clemente-Garcia stayed with him and posted a 17:36 clocking.

South’s other four scorers ran in a pack for most of the new course layout. That’s sophomore Brian Hickman and juniors Grayson Cromer, Aaron Jones and Bricen Burleson.

“That was the plan,” Downs said. “When you run together you can keep picking each other up when it gets tough. They pushed each other.”

Hickman, a sophomore, eventually kicked away from his teammates to take fourth in 17:43, a PR for him by 20 seconds.

“Brian is a big-time pickleball player who has sponsorship,” Downs said. “Pickleball takes a lot of his time, but he’s starting to make some jumps in cross country and is starting to see he could compete in this sport at the next level.”

West’s standout, Ethan Wilson, took fifth in 18 flat, but Cromer, Jones and Burleson were the next three across the line, all in the 18:03-18:04 range.

“Cromer is a rock and we know exactly what we’ll get from him,” Downs said. “Burleson has had three PRs in his last four races. Jones has had his ups and downs, but he’s peaking at the right time.”

Five boys score, so the Raiders’ scoring was complete at 1-4-6-7-8 — 26 — but there was still work to do. South’s sixth and seventh runners wouldn’t figure in South’s scoring, but they could still impact the scoring for the other teams.

South’s sixth and seventh men are soccer players. Mateo Diaz Ruiz (also an outstanding wrestler) and Grayson Steedley had given a lot of effort in South’s 2-0 win on the pitch against Carson on Wednesday. Now, less than 24 hours later, they were asked to perform in a cross country meet.

“They told me they were whipped, but they’d give it everything they had,” Downs said. “They did their jobs. They finished ahead of a lot of runners.”

The others who scored for Carson were Gillis (9th), soccer player Gabe Honeycutt (10th) and Clinton Efird (14th). Fourteen of the top 16 runners were from South or Carson.

Downs said South is eighth in the 3A rankings, based on PRs, but he said Burleson has run faster than his listed PR and the rankings aren’t updated yet to reflect Hickman’s surge.

Long story short, Downs thinks South may be a top-five team in the classification.

“It’s a very good team,” Downs said. “It’s a close team. They hang out. They eat dinner together, play video games together. They’re friends as well as teammates, and that builds success.”

South missed a chance to measure itself against some of the best in 3A when Hurricane Ian knocked out last Saturday’s Wendy’s Invitational in Charlotte.

While the Raiders have checked off their first major goal with the county championship, the next challenge is the South Piedmont Conference Championships on Oct. 20 at Frank Liske Park in Concord. That’s another date that is circled in red in this season’s long journey.

“Northwest Cabarrus has a really good runner who could get second (behind Julian) in the conference meet and Lake Norman Charter has a solid team,” Downs said. “But we know where the toughest competition is coming from. It’s coming from Carson.”