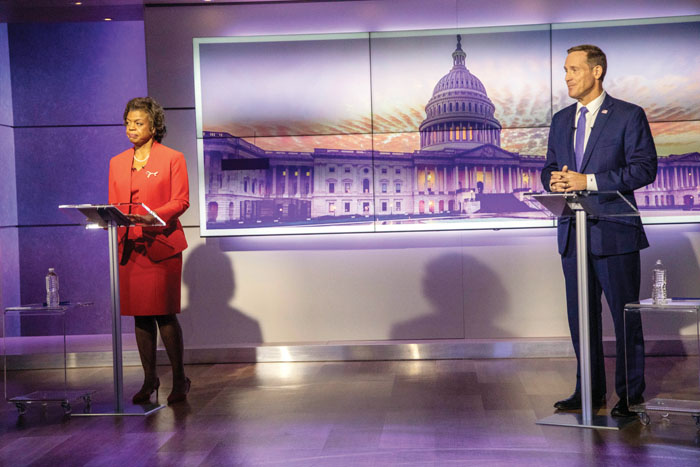 This election outcome in North Carolina, where statewide elections are usually evenly divided but where Democrats haven’t won a Senate race since 2008, could decide which party takes a majority in the current 50-50 Senate. Mail-in absentee voting started last month, and early in-person voting begins Oct. 20.

Democratic hopes this time are in Beasley, a former chief justice of the state Supreme Court who would be the state’s first Black senator if elected.

Budd, a gun shop and range owner first elected to Congress in 2016, relied heavily on President Donald Trump’s endorsement and on outside spending to win the Republican primary in May. Trump rallied with Budd two weeks ago in North Carolina.

Beasley, who went on offense early in the debate, said Trump “represents the most extremist policies and ideology … the reality is Congressman Budd has aligned himself with somebody who is truly extremist in this race, and that’s a reflection on him.”

Budd defended Trump’s help, pointing to the low unemployment and low inflation during the former president’s term and Trump’s victories in North Carolina in 2016 and 2020 — compared with higher inflation today.

Trump “had a lot of wins here in this state, including for our economy,” Budd said. In turn, Budd said Beasley was running from President Joe Biden and would be a rubber stamp for his policies.

“Joe Biden is on the ballot on Nov. 8 and he goes by the name this year of Cheri Beasley,” Budd said.

Beasley didn’t directly answer the moderator’s question about whether she would appear with Biden if he agreed to campaign for him: “President Biden is certainly welcome … We want him to know and meet folks and hear from folks here in the state.”

Beasley also criticized Budd for voting in the House in early 2021 to attempt to delay the 2020 presidential election certification. He stood by that, saying “the core of that vote … was to inspire more debate because I think debate is healthy for democracy.”

Budd also said he would accept the results of next month’s election.

Beasley said it was “outrageous” that Budd has tried to compare the 2020 presidential election challenge to her 2020 campaign for chief justice, which questioned the counting or rejection of many specific absentee ballots. Beasley ended up losing by 401 votes from 5.4 million ballots cast.

Beasley said she requested “a free and fair recount and legal recount to make sure that every single vote was counted.”

Budd co-sponsored a recent measure to ban abortion nationally after 15 weeks of pregnancy, with some exceptions. He previously backed a bill that would ban abortions after cardiac activity is detected, usually around six weeks of fertilization.

When asked what his ideal abortion bill would look like, he responded: “I’ve always been about protecting the life of the mother. I want to save as many unborn lives as possible.” Budd accused Beasley of being extreme on abortion for supporting a federal bill that would codify the previous Supreme Court standard.

While Beasley’s campaign has outraised Budd entering the summer, national Senate Republican groups have neutralized that advantage already spending over $26 million against her, according to campaign reports. National Democrats, in turn, have spent a small fraction of that amount for Beasley or against Budd. Beasley’s supporters hoped her debate performance Friday would attract more outside help.

Beasley said Budd has repeatedly voted against the needs of North Carolina residents, including opposing bills that would have capped the cost of insulin for seniors and letting the federal government to negotiate lower drug prices for Medicare.

On inflation, Beasley was willing to criticize Biden, but not solely. “I certainly believe that the president and Congress can work a whole lot harder to make sure that prices are being lowered,” she said, but with Budd in Congress for six years, “he’s partly to blame as well.”

Budd and Beasley have tried to portray themselves as allies of law enforcement. Budd has received key endorsements from groups representing troopers, police officers and border patrol agents.

Budd declined to participate in any of the four GOP primary debates. In the Democratic primary, the field had been cleared of Beasley’s leading competitors during the campaign’s final months.