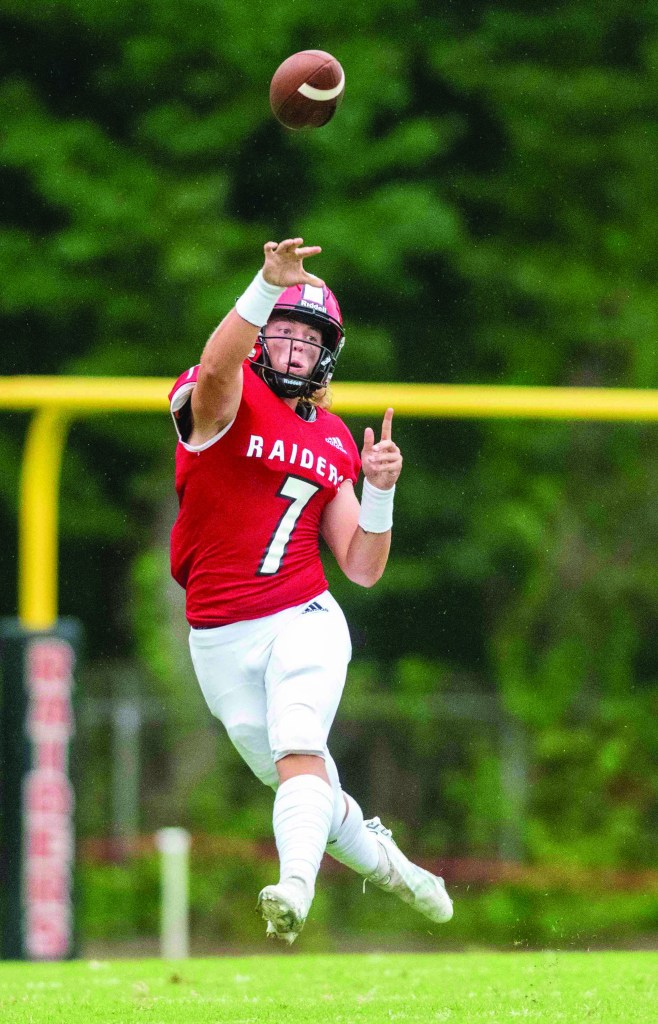 It was their first victory in the Greater Metro Conference. They’ve lost in the league to Hickory Ridge, Lake Norman and Cox Mill.

Todd Massey had a fumble recovery and an interception for the Wonders. Elijah Lawson scored two touchdowns.

Jack Schultz deflected a pass that was intercepted by Massey. That set up a Ty Woods field goal for the Wonders’ first points.

Touchdown runs by Jamare Robinson and Lawson made it 24-6. and Lawson scored from 6 yards out with three minutes left for the final margin.

LANDIS — South Rowan got off to a stunning start but couldn’t sustain momentum in a 54-19 South Piedmont Conference loss to Concord.

After South recovered an onside kick, Landon Richards scored for the Raiders, and South (0-7, 0-3) led 13-0 before the Spiders ran a play.

It was 13-all by the end of the first quarter and the Spiders held a comfortable 41-13 lead at halftime.

South got another score in the fourth quarter when Overcash hit Bronson Hunt for a long touchdown.

Davie (2-5, 1-3) got off to an electrifying start when Wille Purvis ran back the opening kickoff 90 yards for a touchdown, but the War Eagles fell behind 20-7 at the half.

Kyjuan Westmoreland scored two touchdowns for the Blue Devils, who also got rushing TDs from Jawarn Howell and Shameir Houston.

Hunter also had a blocked punt.

The Vikings (4-3, 1-2) possessed the ball almost two-thirds of the game, but the Blue Devils made the big plays.

The Mustangs put together their most productive offensive game of the season, but Central Cabarrus beat them 36-24 with big pass plays.

East (0-7, 0-3) took a 14-6 lead in the South Piedmont Conference game before the Vikings (3-4, 2-1) got even in the second quarter with a 10-yard touchdown pass from Kaden Kline to Adriel Miller, followed by a 2-point conversion.

Kline, who passed for 300 yards, hit Miller for a 70-yard touchdown for a 28-17 Central lead in the third quarter.

East got back within 28-24 early in the fourth quarter, but Kline and Miller connected for another long scoring play, and a 2-point conversion made it 36-24.

East was stopped on downs at the Central 2-yard line with about four minutes left to clinch the victory for the visitors.

Central Cabarrus was able to stay in the SPC race, although the Vikings will have a challenging stretch run, including West Rowan next week.