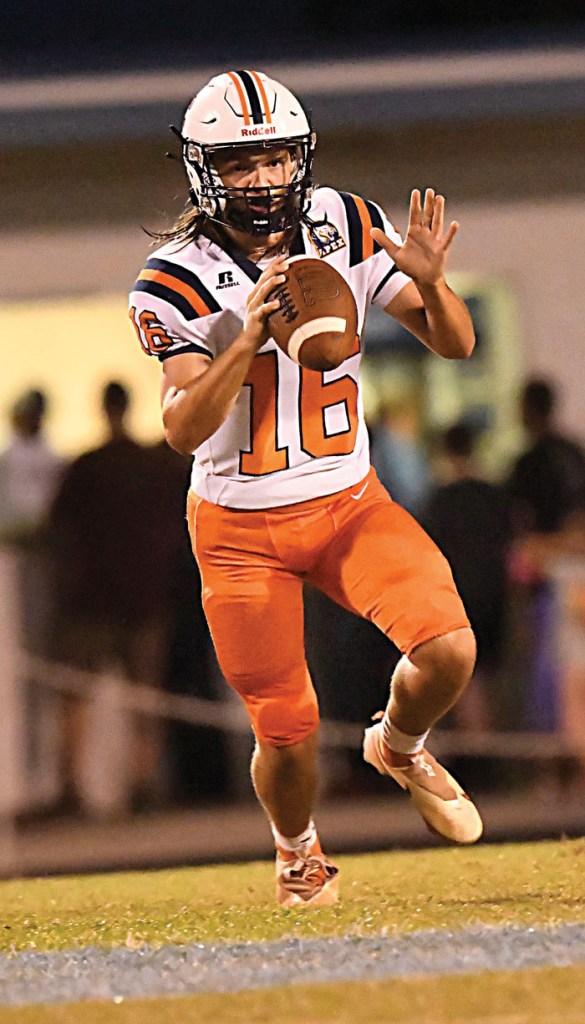 Carson's QB Michael Guiton has thrown for 777 yards so far this season. File photo by Wayne Hinshaw, for the Salisbury Post

He’s a hugger and a praiser who talks more about believing in the cause, molding young men and making memories than he does about winning ballgames.

That doesn’t mean he doesn’t care about winning. He does, and he’s had Carson really well prepared mentally, physically and emotionally to play its last two football games.

On Sept. 15, Carson stood 1-3, had just been flattened 38-3 by Robinson and was a basically an afterthought in the county and the South Piedmont Conference.

But on Sept. 16, an energetic 34-31 loss at West Rowan that felt a lot like a win to Cougar supporters, changed the trajectory of Carson’s season.

After an open week, Carson went down to Concord and achieved a comeback triumph for Carson’s first win in history against the Spiders.

Now Carson is moving up in the world.

Carson is the WSAT Radio Game of the Week for the first time this season.

Ken Anderson and Glenn Taylor will be in China Grove on Friday to tell you what happens when Northwest Cabarrus visits.

But perceptions of the Cougars have changed dramatically since mid-September. Despite the disparity in overall records, there are people who think Carson can win this game and turn the South Piedmont Conference race into a free-for-all.

Maybe the Cougars can. They believe they can. That’s more important than what any prognosticator thinks.

The problems that Northwest presents athletically are similar to the ones Concord presented for Carson. Northwest Cabarrus has a lot of athletes.

The Trojans have  a solid, experienced quarterback. Alex Walker has thrown nine touchdown passes, although he’s not a huge running threat.

What Northwest has that many teams don’t is an elite receiver. Tevin Tucker (6-1, 180) is a James Madison University commit for a reason. His astounding catches made the difference in the West Rowan game for the Trojans.

Carson’s defensive backs aren’t famous, but Lowe liked the way they played against Concord, which took quite a few deep shots but came up empty.

Northwest is balanced offensively. Running back Ray Jay Waters (532 rushing yards) has a solid nickname — “Running” — and often is good for 100 rushing yards.

Defensively, the Trojans are pretty fierce, and they get after the passer. Middle linebacker Jackson Forrest is the Trojans’ leading tackler and leading sacker.

The Concord game was run-run-run. Carson QB Michael Guiton threw two touchdown passes, but they were set up by 40 combined carries by Jordan Galarza and Jay McGruder.

Carson has a good offensive line and would prefer to control the ball on the ground. That worked against Concord. Jordan Galarza rushed for 135 yards,

The other marquee game Friday is East Davidson at Salisbury.

This matchup didn’t look particularly big or exciting when this season started and wasn’t circled on many calendars, but that was then, and this is now.

East Davidson’s game plan won’t be a mystery. Pound the ball on  time-chewing drives and keep it out of the hands of Salisbury QB Mike Geter and running back JyMikaah Wells.

Wells has been devastating since returning from an ankle injury. He has surpassed 1,000 rushing yards for the third time in his career and has scored 10 touchdowns in the past two weeks.

Geter accounted for two more touchdowns in last week’s romp against South Davidson, giving him 19 for the season, and he also stood out on defense with two interceptions.

Salisbury is favored by four touchdowns, which seems like way too much, but the Hornets did wipe out East Davidson 49-0 last fall.

East Davidson beat the Hornets as recently as 2016. The Hornets lead the series 17-10.

Concord is the defending champion in the South Piedmont Conference and can stay in the race with a win against the Raiders. QB Keyon Phillips is the main weapon for the Spiders. He’s a standout.

South lost 42-20 to Central Cabarrus last week, but that was a step forward offensively and defensively for the Raiders after a string of blowout losses.

Defensive end Aquiles Bernal has five sacks for the Raiders.

South is a 27-point underdog according to the Massey Ratings. Concord won 43-0 against South last fall and leads the series 13-10-1.

South hasn’t beaten Concord since it crushed the Spiders 31-0 in 1984.

East has played some good quarters and pretty good halves, but hasn’t put it together for 48 minutes yet.

It’s homecoming for the Mustangs and that may provide the inspiration for East’s first win.

The Vikings aren’t bad, but East should be able to play with them. Central’s victories are against South Rowan (1-6) and Huss (1-5).

East is 45-117-1 all-time against Cabarrus schools, with Concord and A.L. Brown responsible for most of the pain.  That goes all the way back to the 1950s and includes East’s games against schools such as Winecoff and Hartsell.

East is 8-24 against Central Cabarrus and the Vikings have won the last five meetings. East’s most recent win in the series came on the road in 2014.

There aren’t many easy weeks for Davie. Mount Tabor is favored by 10 over the War Eagles.

The Spartans were undefeated until they ran into powerhouse East Forsyth last week.

Mount Tabor averages 32.5 points per game, while Davie allows 35.2, so this figures to be a high-scoring affair.

Tough times at A.L. Brown. The Wonders surrendered 58 points in a shellacking by Cox Mill at home on Monday. On the bright side, the Wonders put up 35.

A Monday game means a short week of preparation, and the Wonders have to put the Cox Mill debacle behind them quickly.

A tough grind to start Greater Metro Conference play — Hickory Ridge, Lake Norman and Cox Mill — has combined with a quarterback injury to put the Wonders in a pretty deep hole.

It looks like 6-4 might be the ceiling for the regular season and that would include winning this one against the Wolverines.

West Cabarrus played Lake Norman closer than expected in last Thursday’s 34-16 loss. The Wonders are 22-point favorites, but the Wolverines may be more competitive than their record indicates.

The all-time series between the Wonders and Wolverines is 1-1. A.L. Brown romped 47-0 in the first meeting, but the Wolverines won 19-18 last fall.

It’s the open week for North Rowan and West Rowan.

It comes at a good time, with both teams reeling from disappointing losses and looking to regroup.