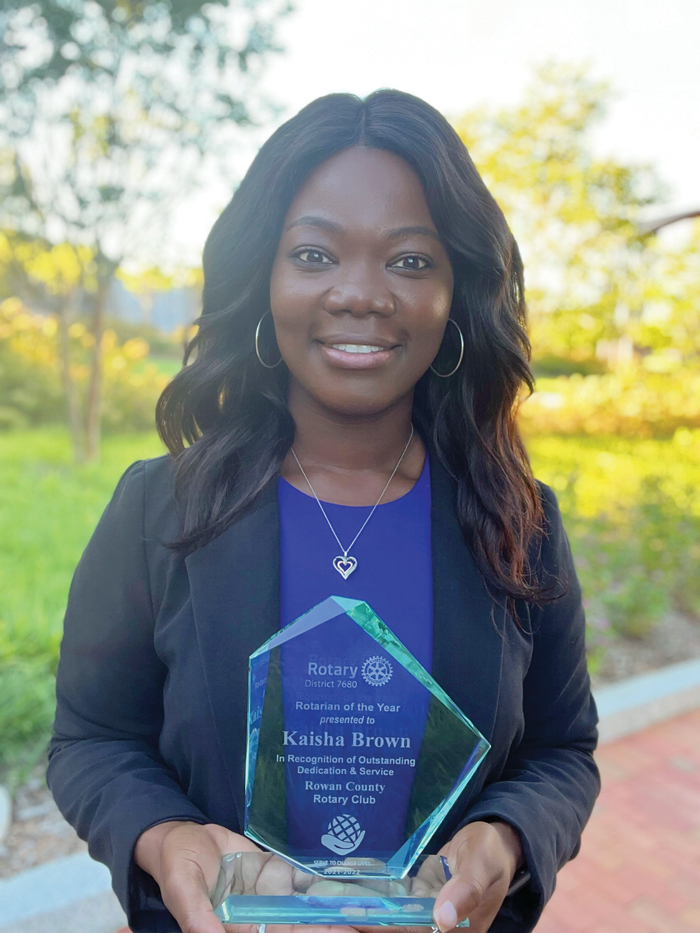 Kaisha Brown earned the Rotarian of the Year from the Rowan Rotary Club recently. Brown is a communications specialist for the city of Salisbury. Submitted photo

SALISBURY — A young, happy, open face is the first thing you notice about Kaisha Brown, a communications specialist  for the city of Salisbury. But it does not take long before you see the depth of her training, her professionalism and her commitment to the city and her job.

And recently, another organization recognized those talents and that commitment as well, as Brown was named Rotarian of the Year by the Rowan Rotary Club at its meeting Sept. 22.

She has contributed significantly to the communication department’s award-winning video, print and social media projects as part of the North Carolina City-County Communicators (NC3C) Excellence in Communications Awards and the Hermes Creative Awards, according to Communications Director Linda McElroy.

The honor was an unexpected surprise, said Brown.

“I got the notification saying all Rotarians should plan to attend the meeting, but I always go, I have perfect attendance,” she laughed. A district leader was on hand and was reading the description of the person the group was honoring.

“I was listening to all they were saying, and thinking it sounded great but that it really could be any one of us,” Brown said. “But when she said my name, I froze. I was speechless, and that doesn’t happen. I don’t get emotional, but I did that day.” Brown said she was honored to have been recognized, though she insists “I’m just the kind of person who sees something that needs to be done and does it, not for attention but because it needs to be done.”

Brown is a graduate of the University of Southern Mississippi, where she obtained a bachelor’s degree
and a master’s degree in mass communication and journalism.

In addition to being a member of the Rowan Rotary, she is a crisis counselor volunteer, an active member of the Rowan County United Way Public Employees Division, the NAACP, Vice President of NC3C, and holds an Advanced Public Information Officer certification from the Federal Emergency Management Administration/Department of Homeland Security.