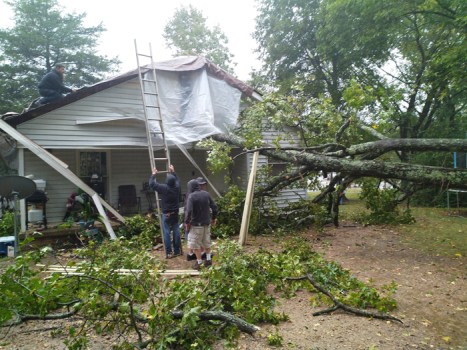 A tree came down on the roof of a house on Enochville Road, Kannapolis, crashing through the attic and damaging the interior living area of the home. American Red Cross photo 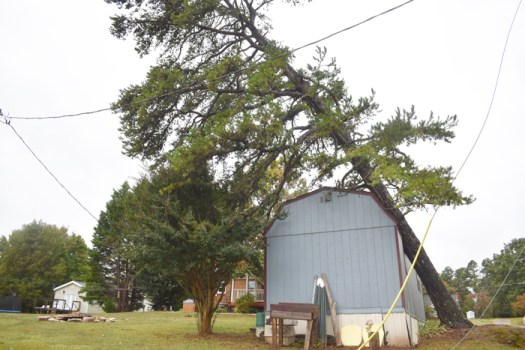 A pine tree began to fall on a shed behind a Faith Road house in the early hours of Saturday morning, and as the day progressed, the tree continued to press into the building, and to get increasingly close to power lines. Photo by Elisabeth Strillacci 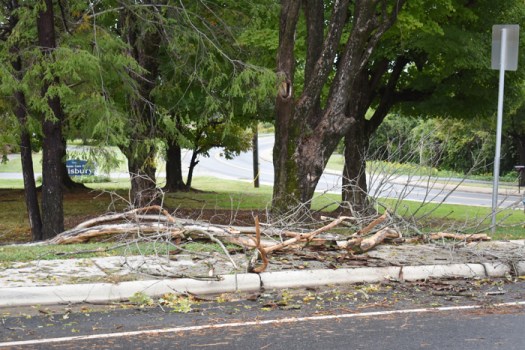 Debris at the corner of Newsome and Bringle Ferry Roads are an indicator of what most people dealt with as Ian crossed Rowan County - downed limbs and leaves. Photo by Elisabeth Strillacci 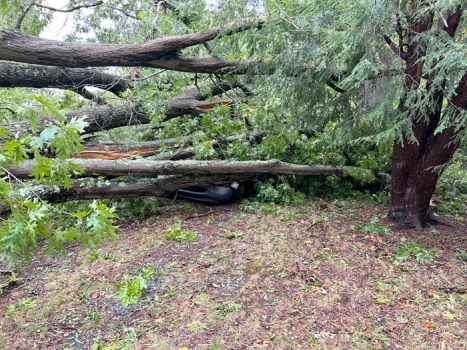 A massive tree came down on a Ford Ranger parked at a home on Jordan Road in Spencer. While the vehicle was damaged, the nearby house was spared. Photo courtesy Spencer Police Chief Michael File 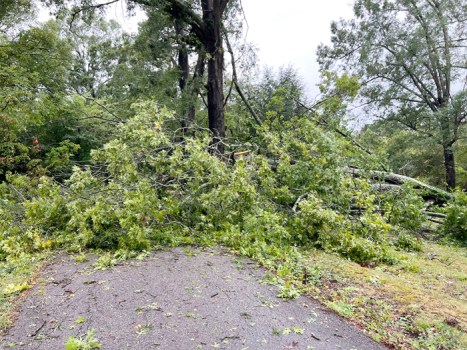 The tree on Jordan Road also caused the street to be closed until Monday, according to Police Chief Michael File. Because the tree fell on private property, he said the homeowner's insurance company will address the issue and the town's public works department will likely reopen the road Monday. Submitted photo

Rowan County braced for the impact of what was left of Hurricane Ian on Thursday into Friday, and while there was some damage and several thousand people were without power Friday night into Saturday, the impact was far milder than originally anticipated.

“Ian brought down trees, power lines and poles across the state. Now that conditions have improved, we have begun making repairs and completing our full assessment of damage. Later this afternoon, we expect to have an estimate for when the majority of outages will be restored in your community,” was posted on the Duke Energy website power outage map around noon.

The was sporadic damage across the county and throughout the state from downed trees, but most of the impact was felt along the North Carolina shore.

In Rowan County, downed trees seem to have caused the most damage, including inside the city limits of Salisbury.

“We did experience multiple areas with trees down, across power lines and blocking roadways,” said Salisbury Fire Department Battalion Chief David Morris. “However, many of these areas have been cleaned by city crews and most roadways are now accessible. There were two homes on Merritt Avenue damaged by the storm when falling trees landed on them, fortunately there were not any serious injuries. Red Cross was notified and responded to assist five adults and three children who were impacted by the damage to their homes. We continue to see a few hundred power outages in the city, most of which are around Grove Street, Henderson Grove Church Road, Fulton Heights and the Morland Park Road area.”

In the wider county area, “We began slowly seeing impacts around the county during the 5 p.m. hour,” said Deputy Chief TJ Brown of Rowan County Emergency Services. “They began increasing closer to 6 p.m. and began to slow around 9:30 p.m. We had multiple trees down, power lines down, and then the combination of trees and power lines down. We had several trees fall on houses. We were fortunate that we have not experienced any significant flooding.”

East Spencer Police Chief John Fewell said his community had little to no impact, with “one tree that was blocking a roadway that was cleared pretty quickly.”

“We had the typical branches and limbs down, and a few trees, with only one major one, on Jordan Avenue,” said Spencer Police Chief Michael File. “We had no issues with flooding at all.”

“Faith had little effects from the storm,” said Faith Mayor Randall Barger. “There were some power outages that were restored quickly and a few fallen trees that have been addressed.”

But for those who did have damage, it was not always an easy fix.

Judy and David Futrell who live on Faith Road got a less than welcome surprise Saturday morning when they went outside to find a large pine tree had toppled onto a shed in their back yard. The tree’s roots were half out of the ground but the tree was being held up by the shed.

“It’s already dropped a few more feet since I first came out,” said David. The weight of the tree was pushing in the roof of the structure, which houses the couple’s yard equipment and David’s tools, but he could not go in to salvage any of the expensive materials, knowing the tree could collapse the building at any time.

“We’ve called the highway department and they said it’s outside of their right of way,” said Judy.

“Then we called Duke Power because when it falls, and it will fall, it will knock out our power and our neighbor’s and who knows who else because it will depend how many lines it takes from the pole,” said David. “But they told us to call them when it falls. We even called our insurance company, and they said the same thing — call us when it falls.”

The family on Jordan Avenue where a huge tree came down lost the use of a Ford Ranger that was nearly crushed by a tree — the extent of the damage will be evaluated once the tree is removed. And because it fell on private property, it will be the homeowner’s insurance that will have to handle the cost of removing the tree.

A homeowner in Kannapolis will have extensive repairs to make after a tree fell on the house, breaking through the roof and causing damage to the attic and the interior living space.