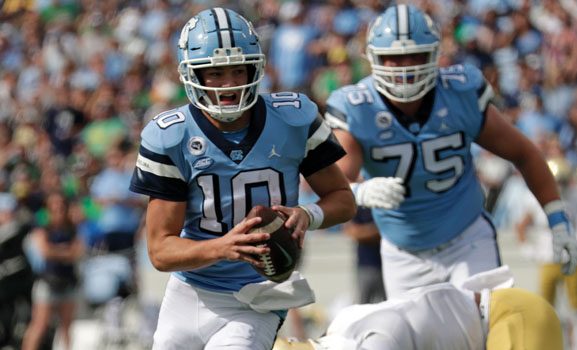 CHAPEL HILL — Drake Maye threw for three touchdowns and ran for two more to continue his strong start to the season and North Carolina opened up Atlantic Coast Conference play with a 41-10 victory over Virginia Tech on Saturday.

Maye, a redshirt freshman, was able to consistently throw downfield, with 13 of his 26 completions going for at least 15 yards. He finished with 363 yards, going 26 of 36.

Grant Wells completed 16 of 26 passes for 139 yards and ran for a touchdown, but the Hokies (2-3, 1-1) struggled overall against a Tar Heel defense that turned in its best performance of the season.

Linebacker Cedric Gray picked off Wells in the second quarter, which set up a 16-yard touchdown pass by Maye to Antoine Green one play later to give UNC a 21-3 lead, and the Hokies never never got closer than 11 points.

The Tar Heels gave up nearly 500 yards per game in their first four contests, but UNC limited the number of big gainers by Virginia Tech. Wells never got in an extended rhythm, as the Hokies finished with only 273 yards.

Virginia Tech: For the first time this year, Virginia Tech’s defense, which ranked 10th nationally in yards allowed per game, looked vulnerable from start to finish, allowing UNC to record 527 yards of offense. That’s not good news for first-year coach Brent Pry’s team as it prepares to face ranked opponents in two of its next three games.

North Carolina: Maye continues to look more assured than most first-year starters, and UNC’s offense has hardly skipped a beat so far without Sam Howell, now in the NFL. But as impressive as Maye was, Tar Heel coach Mack Brown might be most encouraged by his defense matching the offense’s big day.

Virginia Tech: The Hokies remain on the road with a trip to No. 24 Pittsburgh on Saturday.

UNC: The Tar Heels will visit Miami on Saturday.

BOONE (AP) — Chase Brice threw for four touchdowns, ran for another and Appalachian State rolled over The Citadel.

The Mountaineers’ (3-2) first four games were decided by four points or fewer but that wasn’t the case against the Bulldogs (2-2), who they outgained 545-223.

The Mountaineers scored touchdowns on five of their first six possessions in taking off to a 35-0 lead. Brice was 12-of-18 passing for 265 yards with two of his scoring throws going to Christian Horn, one an 80-yarder. Horn’s older brother, Brian Horn, plays linebacker for The Citadel. Christian Horn finished with 132 yards receiving and two touchdowns. Camerun Peoples rushed for 102 yards, 73 coming on a second-quarter TD.

DAVIDSON (AP) — Dylan Sparks carried it 16 times for a career-high 180 yards and Davidson rushed for 498 yards in a 31-0 victory over Butler on Saturday.

It was Davidson’s first shutout since 2019.

Coy Williams added 19 rushes for 109 yards for Davidson (4-1, 2-0 Pioneer), which has won four straight. Aaron Maione had two runs and two touchdowns, and Jayden Waddell added 60 yards and a score.

Jayden Waddell and Luke Durkin combined to complete 7 of 11 passes for 116 yards and a touchdown for Davidson. John Tessmann led the Wildcats defense with two interceptions.

Elon kicker Skyler Davis forced overtime with a 42-yard field goal with 37 seconds left in regulation. Then Elon scored on the first play of overtime when Matthew McKay threw it across the field to a wide open Johncarlos Miller II. Richmond answered with a 19-yard score from Reece Udinski to Jakob Herres.

Jake Larson put Richmond ahead in the second overtime with a 47-yard field goal before Hampton’s run up the middle.

Kickoff was moved up six hours because of Hurricane Ian.

McDowell’s second touchdown had Campbell (2-2) on top 17-0 early in the second quarter and two interceptions led to 10 points as the Camels pushed ahead to lead 34-6 at halftime.

The Eagles (4-1) came in averaging 201 yards a game on the ground but were limited to 96.  Campbell piled up 315 yards on the ground (after averaging 145 yards through three games) and finished with 563 yards of total offense.

The game was moved from Raymond James Stadium in Tampa, Florida to Boca Raton because of Hurricane Ian.

Davis found four different receivers and was 30-of-44 passing for 336 yards with two interceptions.

Raphael Williams had six catches for 103 yards, including a 69-yard connection for the final touchdown early in the fourth quarter. Jalynn Williams hauled in 10 passes for 94 yards.

The Catamounts (3-2, 1-1 Southern Conference) came into the game with a nation-leading 17 sacks and hauled down Keydet quarterbacks seven times to go with a pair of interceptions and two fumble recoveries.

Chris Reynolds threw a 23-yard touchdown pass to Grant DuBose that capped the game’s opening drive and gave Charlotte (1-5, 0-2) a 7-0 lead with 9:48 left in the first quarter. UTEP answered with a 15-play, 75-yard drive that culminated when Smith caught his first TD, a 17-yarder, and Gavin Baechle kicked a 22-yard field goal to give the Miners the lead for good midway through the second quarter. Hardison hit Trent Thompson for a 26-yard score with 33 seconds left in the half and Knight’s 13-yard fumble return for a touchdown 13 seconds later gave UTEP 24-7 lead at the break.

Reynolds threw third-quarter TD passes of 23 yards to Elijah Spencer and 2 yards to DuBose to pull the 49ers to 24-21 but Smith scored on a 58-yard catch-and-run and Baechle kicked a 23-yard field goal to make it a three-point game going into the fourth quarter.

Charlotte, on its next drive, had a first-and-goal from the 2 but, after an incomplete pass, ChaVon McEachern fumbled near the goal line and Taylor scooped and scored on a 100-yard return to make it 41-21 with 13:36 to play.

Reynolds completed 21 of 37 passes for 321 yards and four touchdowns with an interception for Charlotte.