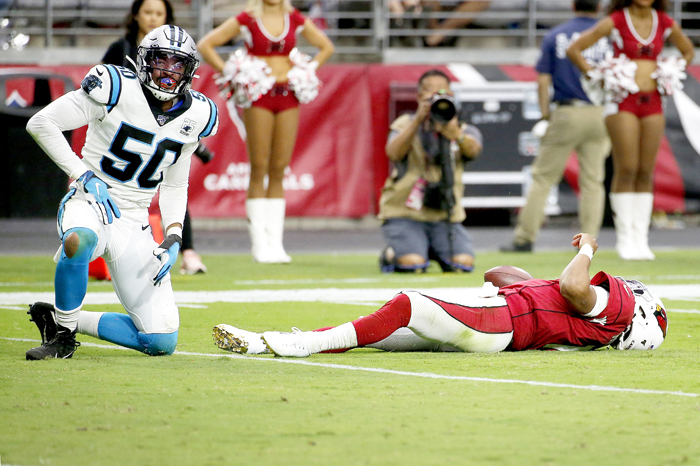 Arizona Cardinals quarterback Kyler Murray lies on the field after being sacked when the Carolina Panthers won their game in 2019. (AP File Photo/Rick Scuteri)

Then again, not many Arizona Cardinals quarterbacks have.

The Panthers have owned the series matchup against the Cardinals, winning 14 of 19 games, including six straight victories. They’ve defeated Arizona in each of the last three seasons — twice with Murray as the starting QB — and six straight times overall dating to 2015 by a whopping average margin of 35-17.

Two of those wins came in the playoffs, including the 2015 NFC championship game in which the Panthers destroyed the Cardinals 49-15 to reach their second Super Bowl.

“It means something,” defensive end Brian Burns said. “I would say from the history we have always had their number and always had it out for them.”

You have to go back to 2013 when Carson Palmer was playing quarterback for the Cardinals’ last win against the Panthers.

Of course, right now both teams are simply thinking about getting back to .500 after starting the season 1-2 when they meet Sunday at Bank of America Stadium.

Panthers coach Matt Rhule knows getting a win against Murray won’t be easy. Rhule called Murray one of the great quarterbacks in the league, citing his “magical” ability to extend plays as he did earlier this season in an overtime victory over Las Vegas.

Rhule also remembers facing Murray in college when the QB threw six touchdowns and ran for another score in Oklahoma’s 63-33 win over Rhule’s Baylor Bears.

“I saw him do things in college that made me just want to walk off the field,” Rhule said. “We sacked him and knocked the ball out of his hands, it bounced on the ground three times; he picked it up and threw it for an 18-yard first down. He’s one of the most amazing players I’ve ever seen.”

Murray is still a young quarterback, but he’s far from a rookie. Now in his fourth NFL season, he’ll play his 50th professional game Sunday.

Meanwhile, Baker Mayfield’s transition to the Panthers hasn’t been a smooth one. The No. 1 overall pick in 2018 is near the bottom of the league in quarterback rating and completion percentage through three games.

And despite coming off their first win of the season, the Panthers’ passing game is averaging a paltry 161.3 yards per game.

“Not good enough yet,” Mayfield said when asked to assess his play.

Miscommunication on passing routes is commonplace. Batted balls are a regularity. And third downs are an adventure.

“Our passing game, specifically third down, is not anywhere where we want it to be,” Rhule said.

D.J. Moore is Carolina’s No. 1 wide receiver. The Panthers gave him a three-year, $61.9 million contract this past offseason to be a playmaker after he had three straight seasons with at least 1,150 yards receiving. But through three games, Moore has a mere 88 yards on seven receptions and one touchdown.

Mayfield knows he’ll have to handle the Cardinals’ blitz package to be successful. Opposing teams have been relentless with blitzing.

It’s unclear if Mayfield will have his top running back with him. Christian McCaffrey missed his second straight day of practice with a quadriceps injury and his status is uncertain. If he can’t play, Chuba Hubbard and D’Onta Foreman will carry the load.

There was a bit of panic from the Panthers when kicker Zane Gonzalez was lost for the year with a groin injury in the preseason.

But replacement Eddy Pineiro, who lost a training camp competition to Greg Zuerlein with the Jets, has been up to the task. He’s 7 of 7 on field goal attempts and is perfect on extra points, too.

The Panthers failed to register a takeaway in their first two games, but they turned things around last week against the Saints with three takeaways to get back to even on the season in the turnover differential.

Carolina blitzed more against Jameis Winston and they’re expected to use that same strategy to get Murray off his mark Sunday.

OPENING LINE: Panthers by 1 1/2, according to FanDuel SportsBook.

TURNOVER DIFFERENTIAL: Cardinals plus-2; Panthers even.

CARDINALS PLAYER TO WATCH: QB Kyler Murray had some good moments Sunday against the Rams, finishing 37 of 58 passing for 314 yards, but the Cardinals still couldn’t find the end zone and settled for four Matt Prater field goals. Murray seems to be getting on the same page with WR Marquise Brown, his college teammate at Oklahoma, as the duo connected 14 times for 140 yards.

PANTHERS PLAYER TO WATCH: RB Christian McCaffrey is hitting his stride with back-to-back 100-yard rushing games for the Panthers. After being held to 32 yards in the season opener, the 2019 All-Pro is now tied for fifth in the league in rushing with 243 yards and looking explosive, particularly when he gets in the open field.

SERIES NOTES: The Panthers have owned the Cardinals through the years, winning 14 of 19 matchups overall, including the past six. Carolina has beaten Arizona in each of the past three seasons. Over the past six matchups, the Panthers haven’t scored fewer than 27 points.

STATS AND STUFF: Arizona has been outscored 56-13 in the first half of games this season. … QB Kyler Murray is 2-0 in his career in head-to-head starts against Baker Mayfield. … After scoring 18 touchdowns last season, Cardinals RB James Conner has had a slow start to the season with just 90 yards rushing. That’s largely due to the Cardinals falling behind in games and having to throw the ball to catch up. However, Conner has nine TDs in his past nine road games with Arizona, accumulating at least 50 yards from scrimmage in all of those games. … Cardinals DE J.J. Watt could pose major problems for Panthers rookie LT Ickey Ekwonu, who struggled against elite pass rusher Myles Garrett in Week 1. … The Panthers snapped a seven-game losing streak at home last week — and a nine-game skid overall — with a win over the Saints. … Carolina’s defense had three takeaways against the Saints after getting none the first two weeks. … In his first game with the Panthers, WR Laviska Shenault had two catches for 90 yards, including a 67-yard catch and run for a touchdown, sparking a win against New Orleans.

FANTASY TIP: WR D.J. Moore, who has had at least 1,150 yards receiving in each of the past three seasons, has just seven catches for 88 yards this season and one touchdown. He had great chemistry with Mayfield in training camp, and the thinking is he’s going to have a breakout game soon.