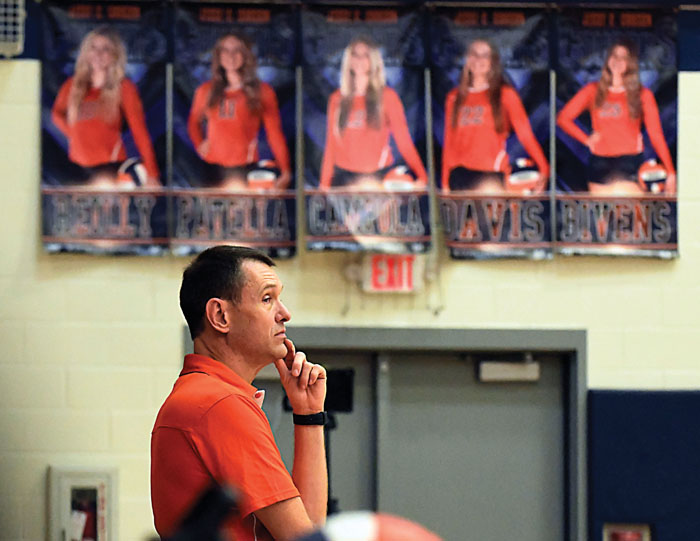 Rogers purposely made it a very low-key pursuit of an important record. He didn’t want it to be about him. He wanted his team to be able to concentrate on the season without the added distraction and pressure of trying to put him in the state record book. South Piedmont Conference matches against teams such as West Rowan, South Rowan and East Rowan are tough enough without distractions.

Rogers moved past the long-standing mark of 732 career wins posted by Sherry Norris, who coached at Chapel Hill High from 1977 to 2013.

Rogers put together his remarkable record at two schools — West Davidson and Carson.

His first chance to teach science was at West Davidson High in Tyro in 1990. He also was placed in charge of a downtrodden volleyball program that had gone 0-14.

His first eight wins came in his rookie season.

He also coached girls basketball for a while in the 1990s and was successful, but he found out he loved volleyball more.

In 2000, Rogers and coaching colleagues got the High Rock Volleyball Club started. That enabled girls to play volleyball almost year-round. Teams got better.

When West Davidson moved up from 1A to 2A, the Green Dragons lost one Central Carolina Conference match in four years from 2005-08.

Rogers was ready for a new challenge by then. That’s when he was hired as biology teacher and volleyball coach at Carson.

When Carson opened in 2006, coach Trish Hester had started a competitive program.

Rogers’ first Carson team in 2009 made the playoffs. His first 10 teams averaged 25 wins per year. That was his goal. He wanted girls who played four years for him to experience 100 wins.

“We’ve built a program where the girls expect to win,” Rogers said. “They work hard, and I’m convinced that the work and the time they put into volleyball is going to help them as they go through life. A lot of these girls are going to do great things.”

Carson has done some great things. The Cougars won 35 matches in 2012 and 34 in 2013. Both of those teams were regional champions and finished second in the state.

Five Rowan teams are going to have winning seasons this year.

West Rowan has been on top of the county in recent years and has stayed there this season with an undefeated record in the SPC.

“We just haven’t had that injury-free year that we needed,” Rogers said. “We’ve had six injuries in the last four weeks. If we stay healthy, we’re not undefeated, but we’ve got a few more wins.”

Carson let a victory slip away against Lake Norman Charter last week. That pushed back the record-setting match, but it all worked out. It made win No. 733 very memorable, going five sets against his alma mater.

“We didn’t play particularly well and East lost Anasty (Faavesi) early on,” Rogers said. “But it was a good match. Both teams fought hard for it.”