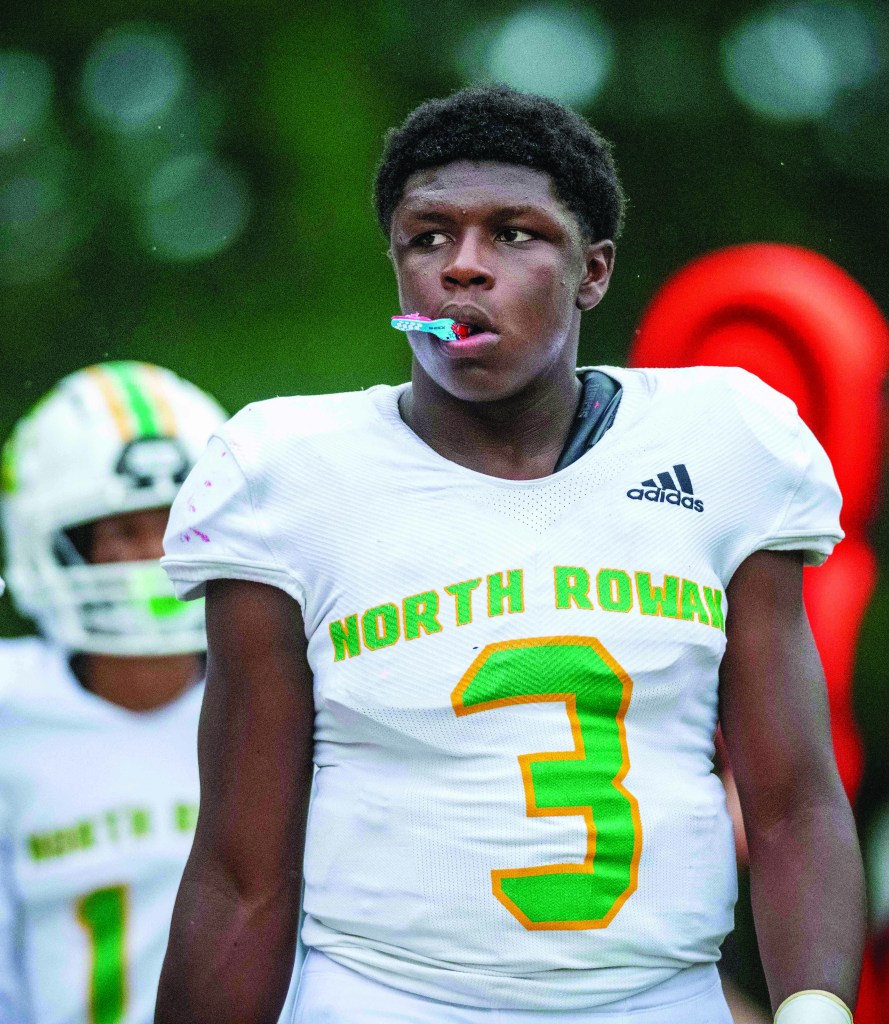 North quarterback Jeremiah Alford will lead the Cavaliers in a critical game tonight against East Davidson. JON C LAKEY / FOR THE SALISBURY POST. 8/26/22

Exceptions are East Rowan, which picked an ideal week to be open — and A.L. Brown.

The Wonders, who are celebrating homecoming, have moved Cox Mill’s visit to Memorial Stadium back to 6:30 p.m. on Monday.

Games began shifting forward as early as Monday this week. There were pretty easy decisions for athletic directors to make once they examined the forecast and could see a very massive Hurricane Ian slashing its way north.

Rain is expected to be heavy and widespread by Friday.

While the talk has been mostly about hurricanes this week, it shapes up with very interesting games on the football fields tonight.

West Rowan is on the road at Northwest Cabarrus, where the Falcons could face one of their toughest fights in their quest for a conference championship. Northwest Cabarrus is 5-1, after all, the same record the Falcons have. That one has game of the week written all over it. WSAT radio will be there.

West’s conference-winning drought dates back to 2011, although that’s still a long way from the county’s driest spell. Carson, which opened in 2006, has yet to win a conference title. South Rowan hasn’t won a conference championship (or co-championship) since 2001. East Rowan’s football famine dates back to 1997 when the Mustangs famously shared conference laurels with a powerful Concord squad and a state-championship A.L. Brown team.

North Rowan will be enjoying homecoming festivities tonight. The final week of September is normally a perfect time for homecoming floats and queens and kings, with the hot weather in the rearview mirror and the cold weather yet to arrive.

East Davidson isn’t a pushover homecoming opponent and doesn’t figure to be an automatic victory for the Cavaliers, who are still licking their wounds. They got trounced pretty thoroughly by Thomasville last week in a game a lot of people thought North could win.

The Golden Eagles, who have won three games overall, romped in their only Central Carolina Conference game so far. Fans may also remember that East Davidson took North Rowan to overtime last season before losing.

Carson returns to action after an open week and the respect level for Carson has shot upward in the last two weeks. A lot more people believe in the Cougars after their 34-31 loss to West Rowan than believed in the Cougars before that setback. No one is saying Carson can win the South Piedmont Conference, but many are thinking third place is a definite possibility and some are thinking that second place is doable.

We’ll find out a whole lot tonight about perceptions and realities when the Cougars play Concord’s Spiders on the new turf on E.Z. Smith Field at Bailey Stadium.

It does not appear it’s the Concord of 2021, when the Spiders went undefeated in the SPC, but they still are 2-0 in the league and they are still the champs until someone proves otherwise.

If Carson does prove otherwise tonight, it will be the first time the Cougars ever have beaten the Spiders.

South Rowan plays at Central Cabarrus. The Raiders’ struggles over the last five weeks have been well-documented, but Central Cabarrus, which also owns one win, is a team the Raiders  have a chance to compete with.

Salisbury, which has won five in a row, should have its way with South Davidson in Denton.

Not sure what JyMikaah Wells can do for an encore after last week’s school-record, six-touchdown romp against West Davidson, but maybe he’ll get seven this week.

Everyone agrees South Davidson is improved over last season, but the Wildcats were the surprise victim last week, as Lexington snapped a 29-game losing streak.

It could be a memorable game for Wells. Despite basically missing two games this season, he has 851 rushing yards. His third 1,000-yard season is in sight.

He’s up to 4,293 for his career and has surged past West Rowan legend Wade Moore into seventh place on the county’s all-time rushing yards list.

Wells’ next touchdown will break the school record. He has 58 and is tied with Romar Morris.

As far as Salisbury’s defense — a shutout in this 1A/2A Central Carolina Conference game is a reasonable goal.

Salisbury romped 64-0 last season and is favored by 42 points tonight.

North Rowan is a 13-point favorite with a 67 percent win probability in this Central Carolina Conference game, according to the Massey Ratings.

It’s a critical homecoming game for the Cavaliers, a potential turning point in their season, after getting mauled last week by Thomasville.

Not much went right for the Cavaliers last week. They couldn’t run it for the first time this season and they allowed two 100-yard rushers.

Jeremiah Alford threw his eighth and ninth TD passes of the season, with one going to record-setting Amari McArthur.

North has won 17 0f the 21 meetings with the Golden Eagles, including last season’s 33-32 two-overtime game.

East Davidson’s most recent victory in the series was in 2008.

South has given up 126 points the last two weeks, so it will look to get more stops against a South Piedmont Conference opponent that has been quite stoppable.

South was still in the game at halftime with West Rowan last week, down two touchdowns, but ultimately got blown out 61-20.

A bright spot was quarterback Brooks Overcash. He completed 10 of 23 passes for 156 yards and two TDs.

Trae Rucker had a career game on the ground for the Raiders, pounding for 115 yards on 23 carries. Sophomore Conner Richards made 10 tackles.

Central Cabarrus is favored by about three touchdowns.

It’s been an interesting series. South won the first 10 meetings. The Vikings have won the last seven, including a 29-12 decision in 2021.

Lots of history for this South Piedmont Conference matchup, including West’s victory in a late-season battle of unbeaten squads in 2005 and a 2007 game that included 339 rushing yards and six TDs by West back K.P. Parks.

West has been responsible for many famous streaks in this century — 44 straight county wins, 46 straight overall wins and three straight 3A championships being the most famous — but West also has a streak going against Northwest Cabarrus. West has beaten the Trojans 12 straight times, so the Falcons have every reason to be confident about tonight’s showdown, even on the road.

Northwest hasn’t beaten the Falcons since 2002.

West put up more huge numbers in last week’s win over South Rowan.  Adrian Stockton had two touchdowns on a reception and a kickoff return. The Falcons put the ball in the end seven times on the ground, including three more Evan Kennedy touchdowns. Kennedy has nine rushing TDs for the season. Lucas Graham has eight touchdown passes.

Coached by former Catawba receiver Eric Morman, Northwest throws the ball efficiently and pushes a spirited, no-huddle, hurry-up pace, so the Falcons’ pass rush and pass coverage will be tested.

West has played a more difficult schedule. The Falcons are favored by 12 points.

Carson is 0-6 against the Spiders. That’s the first number that jumps off the stat sheet.

Carson’s losses to Concord include one in the 2010 playoffs. That 30-21 defeat ended the season for the best team Carson ever has put on the field.

Concord began this season with three really ugly non-conference losses, but has posted South Piedmont Conference wins against East Rowan and Central Cabarrus the past two weeks and is tied for first place with West Rowan and Northwest Cabarrus.

Carson has played a challenging schedule, including Statesville and Robinson, and nearly knocked off West Rowan its last time out.

Michael Guiton has completed 49 passes for the Cougars for 633 yards. Carson has gotten good production out of receivers CJ Guida, Jay Howard and Emory Taylor.

The Cougars have had two weeks to get ready for this one.

Concord is a 9-point favorite. The Massey Ratings give Carson a 35 percent chance of springing an upset.

Davie and Reagan are part of the four-team cluster of teams at 1-1 in the Central Piedmont Conference.

The winner is going to be tied for second because the league’s two unbeaten teams, East Forsyth and Mount Tabor, are squaring off tonight.

Davie and Reagan have both been pounded into dust by top-ranked East Forsyth.

Reagan’s Raiders from Pfafftown are a 7-point favorite tonight on the road.

The Wonders are hoping for a dry homecoming and have moved this game back. The Greater Metro Conference contest is considered a toss-up.

Both teams are good, but they may be only middle of the pack in a stout conference.

Cox Mill has destroyed several opponents (including 5-1 Northwest Cabarrus), but the Chargers have lost in the GMC to Mooresville, while the Wonders have dropped games to Hickory Ridge and Lake Norman.

The Wonders have gotten off to strong starts in both of their GMC losses, but haven’t been able to sustain momentum in the second half.

This is basically a must-win for both teams if they’re going to be a factor in the league.

The Wonders own a 7-2 edge in the all-time series.