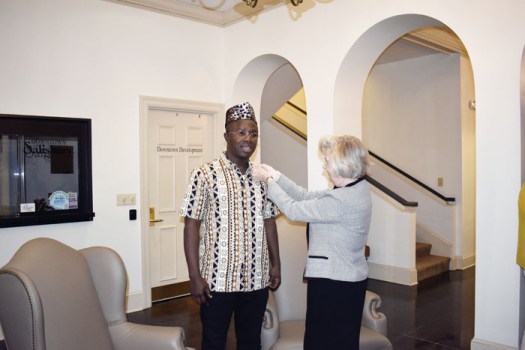 Alexander pinned a City of Salisbury collar pin on Koijee as a memento of cementing the relationship between communities. Elisabeth Strillacci / Salisbury Post 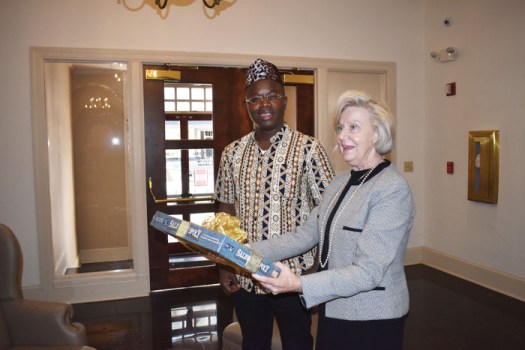 Mayor Alexander presented Mayor Koijee with his own personal version of the board game Monopoly, called Salisbury-opoly which includes street names and historic sites throughout the city. Elisabeth Strillacci / Salisbury Post 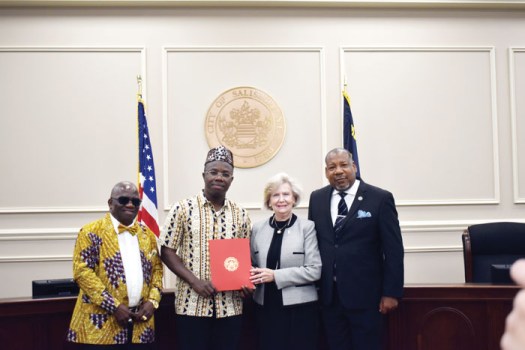 Monrovia, Liberia, Mayor Jefferson Koijee joined Alexander and several other dignitaries about 5 p.m. so the two mayors could sign, in person, a memorandum of understanding between the two cities.

The partnership was in part encouraged by newly-appointed Livingstone College President, Dr. Anthony Davis, formerly vice president of operations, and James Hunder of the Winston-Salem-based Liberian Organization of the Piedmont. Following Salisbury’s successful sister city relationship with Salisbury, England, Alexander said it seemed like a natural next step.

Koijee was in the U.S. on a separate UN mission and asked to make a side trip to Salisbury in order to sign the document in person. He came into office in 2018, and oversees a city of more than a million people, a substantially larger city than Salisbury but he expressed tremendous interest in how Salisbury operates. He asked Alexander about a number of programs, from the police department to waste collection.

Following an official signing by both, Alexander presented the visiting mayor with a Salisbury collar pin and a game of Salisbury-opoly, a local version of the game Monopoly, before taking some time for lemonade and treats.

America’s relationship with the West African nation of Liberia dates back to the 19th century. In the early 1800s, the American Colonization Society founded the colony of Liberia south of Sierra Leone as a homeland for freed U.S. slaves outside of British jurisdiction. Monrovia was named after America’s fifth president, James Monroe.